Clair Morrissey has gotten to spend some quality time in the Costa Rican jungle recently, thanks in part to a $10,000 Graves Award in the Humanities. 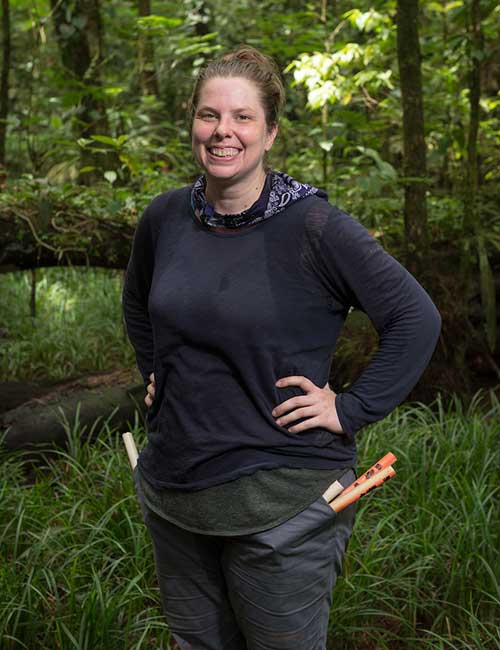 The Organization for Tropical Studies’ La Selva Biological Station and Reserve is one of the last places on earth you’d expect to find the associate professor of philosophy carrying out her research. But Morrissey, who specializes in practical ethics, is there to explore the question of how scientific knowledge is related to valuing nature—until now, a question of moral philosophy that has received little attention.

“Philosophers have been criticized for doing everything from the armchair,” says Morrissey. “I believe that to have something worth saying, you have to be immersed in the world.”

Her latest project was inspired by a conversation she had last year with three of her faculty colleagues in biology: Professor Beth Braker; Gretchen North, the John W. McMenamin Chair in Biology; and Associate Professor Shana Goffredi. “I thought their work with undergraduate researchers was really interesting, and that there was something I could contribute to structure a discussion about the moral issues involved in the work they are doing,” Morrissey says.

As a philosopher whose graduate training included an examination of the ethical, legal and social implications of the human genome project, Morrissey’s curiosity was sparked by the question of how virtue is defined among scientists. “Virtue ethics and theory suggests that the way to become a good person is to practice virtue, and to adopt role models and be mentored by them,” she says. “Beth, Gretchen and Shana have a sustainable mentoring community—they are successfully training young people to be responsible scientists, and I wanted to see how they do it.”

In studying the trees that make up the rainforest canopy, Braker, North, Gofreddi and their students see their work and the rainforest very differently than non-scientists do, Morrissey says. “They see details I don’t, and use a lot of ‘eye’ language to describe their expertise—‘She’s got good eyes’ is a common form of praise,” she says.

“Is there a connection between being able to see that fine-grained richness and caring about it? Does appreciating nature require scientific understanding? If so, what does that mean? Does that expertise give you a heightened perceptual capability? These are the questions I’m interested in trying to answer.”

Morrissey is convinced that this kind of innovative moral philosophy is far more likely to come from small liberal arts colleges rather than large research universities. “I know the biologists personally,” she says. “Those kind of interdisciplinary interactions are harder to come by at an R-1 institution.”

It’s a view that was reinforced during her attendance of the 4th Conference of the Public Philosophy Network, where she presented a paper on her work at La Selva. “Many of the people engaging with the real world in a sustained way were from liberal arts colleges,” she says. “Liberal arts colleges—and community colleges, too—are more supportive of innovative creative work like this.”