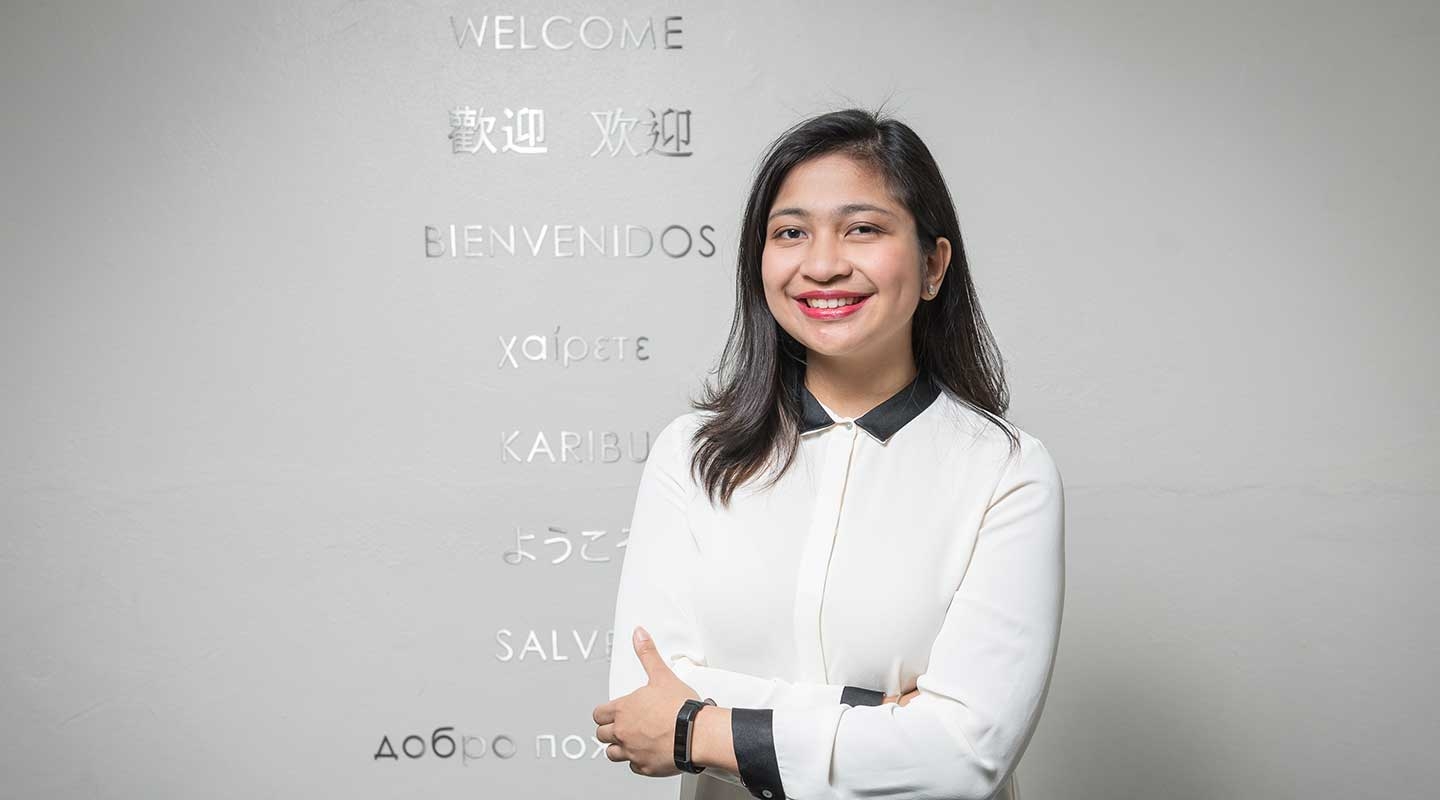 Growing up as a “global nomad,” Gaea Morales found herself drawn to both the liberal arts and a global city like Los Angeles.

Gaea has found a community of support in L.A. while continuing to expand her horizons around the world. Traveling from the Philippines to Occidental was a bold move and after four years, she has much to show for it. Gaea shares how her international student experience and passion for diplomacy and international affairs uniquely prepared her for a semester with Oxy at the UN.

I was born and raised in the Philippines, and lived there all my life, but I identify as a TCK, a third-culture kid, or “global nomad.” I was a Filipino Scholar at an international school in Manila. There were about 60 nationalities represented, from preschool to high school, and my exposure to these different cultures, politics and belief systems is what really drew me to international relations and the idea of working with different people from around the world. A college counselor first suggested Occidental to me, believing it would be a good fit, and while I owe a lot to the  International School Manila in terms of my initial interest in diplomacy and international relations, it was my dad and growing up on a military base that first introduced me to security and peace studies. I believe that my path to this school has been a series of serendipitous situations and moments. I'm so grateful to my family, who has supported my ambitions, even if it meant sending me over 7,000 miles from home.

I only applied to liberal arts colleges, and I really wanted to feel independent as a student and supported at the same time. I've developed really close relationships with my professors, who are my mentors and who I look up to and respect. Over the years, I have felt that I could come in for advice and I would never feel alienated or intimidated. That was really important for me, especially being an international student and coming from a small high school. When I first came to Oxy, there was that initial “Will I fit in?" anxiety, and I had been aware that people have their own conceptions of what an international student is in a U.S. private institution. What helped me overcome these anxieties and remain true to who I was is finding home in the different spaces on campus. [As a diplomacy and world affairs major], the DWA department has been my second home. I really felt welcomed at the Young Initiative especially, where I have been working since the summer of my first year, and the Office of Admission and International Programs office, who have supported me the past four years, even before I stepped foot on campus. 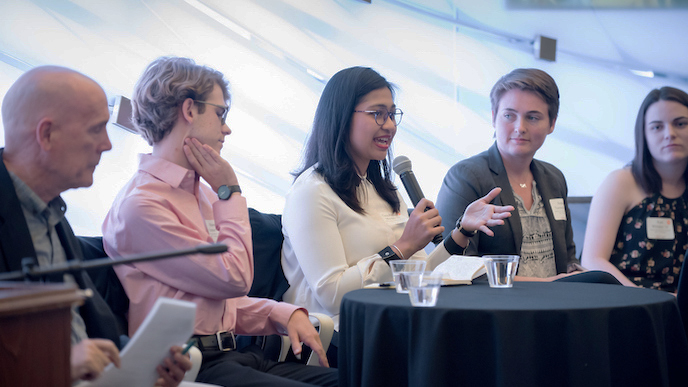 In all honesty, the UN program was one of the key things that led me to Oxy, and something I worked toward from the moment I declared my major as a sophomore. This ambition is what pushed me to persevere and challenge myself on and off campus. When I found out I got accepted, I was relieved and ecstatic. There was no doubt in my mind that I was going to take the opportunity. In New York, I worked with the United Nations Institute for Training and Research, a specialized agency in charge of training the diplomatic corps community in the city. Simply put, it was a lot of event management. My day-to-day involved calling UN country missions, booking conference rooms and catering for trainings, writing budget reports and contracts—everything associated with organizing a training for the diplomats. The most memorable opportunity was organizing a conference on sustainable development and preventive diplomacy from start to finish, from searching for panelists to writing my head-of-office's opening and closing remarks. Some days I would be in the General Assembly or in headquarters sitting in a training. The fast pace and variety in tasks kept me on my toes, and I feel that I've really grown as a result. It was a challenge balancing a full work schedule and taking on coursework during the lunch hour, but I loved the experience so much. I still remember hearing from seniors who had done the UN program and I thought,  “I really hope to be in your shoes one day." It's so humbling and surreal to me that I'm back now and think, wow, that happened. 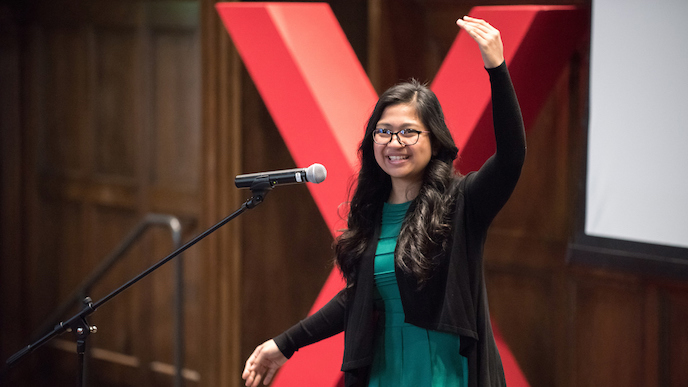 Gaea Morales '18 speaks on sustainability and global development at TEDx at Oxy on April 2, 2016.

When I first came to Oxy, I couldn't have imagined all the opportunities that were in store, which is telling of the kind of environment that Oxy provides for its students. There's so much mutual support and respect among students; you can take leadership roles in whatever club or whatever field you're interested in. All it takes is initiative and openness to new things, and commitment. Every day I am in awe of my peers and their dedication to their passions. It's an inspiring community to be a part of. From international admissions, programming for the McKinnon Center, to student government and the Honor Board, I view my work on campus as a form of service and gratitude, and a desire to represent international students on campus.

You don't come out of your four years and think “Now I need two years of work experience" to apply for jobs. Students can leave Oxy with two to three years of work experience on top of coursework. Three years ago, I had no idea that I would have studied abroad in Paris while working at Planète Enfants & Développement, or have lived in New York and worked at the UN. Where Oxy is situated, not just in the U.S., but also in a global city like L.A., for a global nomad, Oxy can feel like home.

Something I can say I'm proud of after four years, was that I was open to all of the opportunities that came my way. I learned quite a bit about myself, but above all I learned to be brave and to take risks. My overall experience at Oxy has solidified in my mind that I want to work in international relations, wherever it may take me. Whether I remain in Los Angeles or in the country, I realize it's also the small moments I'll take with me after Oxy, from sitting in the Quad or the Green Bean doing readings, to my first rehearsal with the Glee Club and the Accidentals. In many ways, Oxy will always be a home away from home. I am who I am today because of the people I've met along the way, and I am grateful to my mentors and peers who have welcomed me and were genuinely invested in my growth. If you seek difference, if you seek excitement, if you don't want routine, if you want to grow, if you want to challenge yourself, then Oxy should be on your radar.