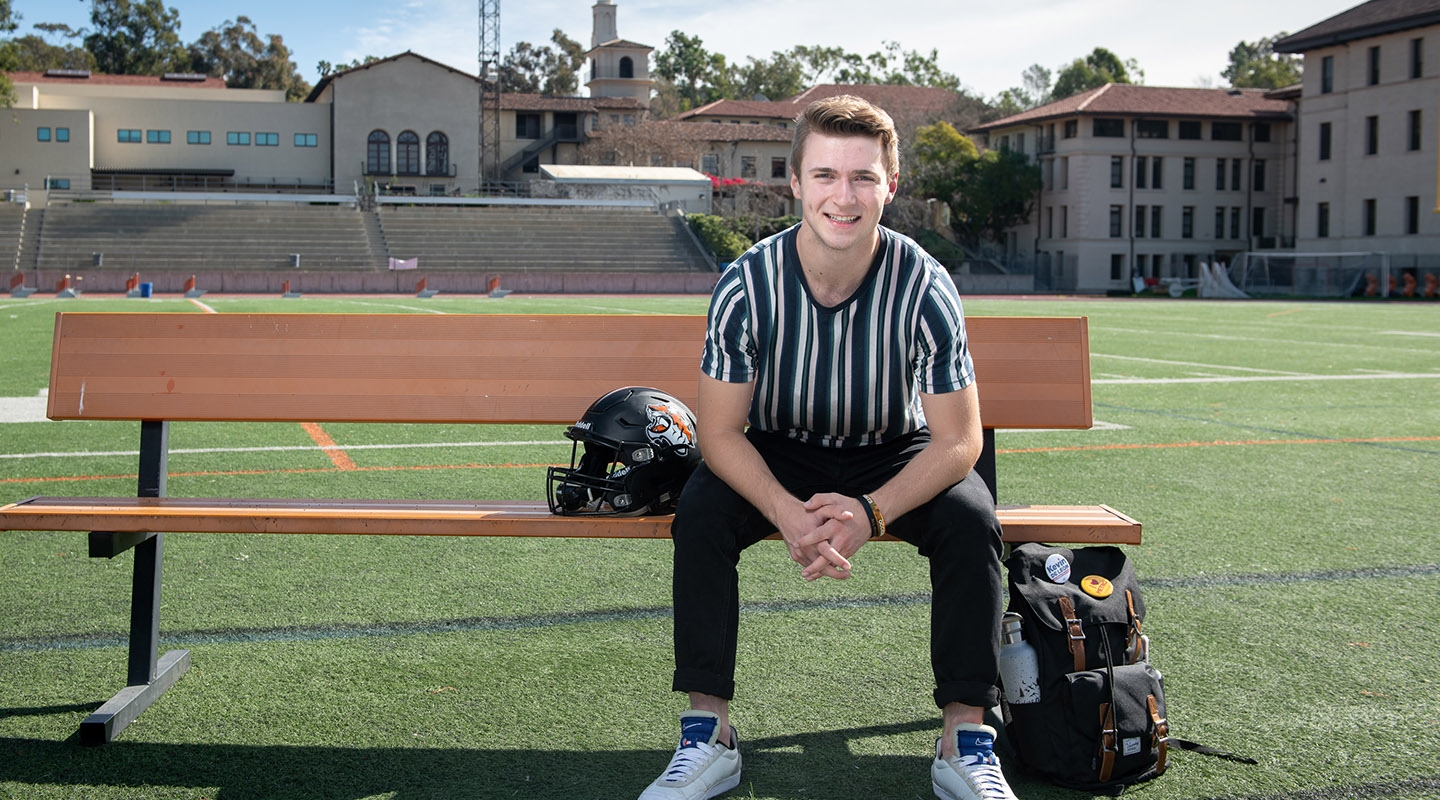 Kyler Parris admits that he struggles to “say no to cool opportunities.” But his openness has exposed him to everything from playing sports to student government and an internship in Representative Adam Schiff’s office.

As a high school senior in Bothell, Wash., Kyler made a transition to football after years of playing soccer. After meeting the coach and some of the athletes at Oxy, he was ready to continue. Football players arrive on campus in late summer, before the rest of the students, and by the time his classmates showed up he already had a solid group of friends, including upperclassmen.

“I knew we were going to stick together and be there for each other because that’s what you do as a teammate,” he says. “So it was really cool right from the beginning. Before classes even started, I called home and said, ‘this is the best decision I ever made.’ “

One of the benefits of being a student-athlete at a school like Oxy is your focus is not singular, Kyler says. His coaches have been not only understanding of his interest in getting involved in other ways on campus, but encouraging.

“You can find your place because we’re here for a great education. No one is coming here just to play football.”

Being an athlete, and especially being on a team sport, fills my bucket in a certain way. Then my other leadership involvements, like engaging with our community, fills a different bucket.”

He has endeavored to strike a balance between classes and extracurriculars. He admits that he’s pretty much always busy, but it’s worth it.

“Being an athlete, and especially being on a team sport, fills my bucket in a certain way. Then my other leadership involvements, like engaging with our community, fills a different bucket.”

Kyler works for the McKinnon Center for Global Affairs, which dovetails with his Diplomacy & World Affairs major. Kyler and another student are currently planning a conference on gentrification and displacement, which will apply global ideological principles like human rights at the level of our city and communities.

He is also the vice president of policies for ASOC student government, where he is putting together a constitution commission to review financial policies, senate bylaws and other foundational documents in order to improve the organization’s efficiency and better meet the needs of students.

In his “down time,” he works as a tour guide for the Admission Office, serves on the Student Marketing Action Committee (SMAC) and was selected as the student representative to the Board of Trustees Budget and Finance Committee.

Kyler plans to study abroad during his junior year in Latin America so he can improve his Spanish language skills. He also plans to apply for a Young Student Grant, which funds independent summer research projects.

As a small school in a big city, Oxy particularly appealed to Kyler and he loves exploring Los Angeles—especially with friends that are locals.

“I like being able to see L.A. as not just movie stars and Beverly Hills, but a place of engagement with neighborhoods that have super interesting histories and, sometimes, complicated relations.”

The metropolis also presents top-notch internship possibilities, such as Kyler’s stint in the congressional office of Representative Adam Schiff this spring. He worked at the office a few days a week right in the midst of the Mueller report, when Schiff was on the cover of Time and regularly appeared on national TV making the case for investigating the president.

“People love to call the office and tell you what their thoughts are,” he laughs. “Sometimes I’d come in and they’d say, ‘just so you know, Schiff was on Fox News this morning so there’s going to be a lot of calls coming in.’”

He got to meet Schiff multiple times, he says, and being part of a committed team working to defend democracy was pretty special. His best day was April 18, 2019, the day the Mueller report was released to the public. Schiff was in town and Kyler helped set up for a press conference in front of Burbank City Hall.

“There I was, wheeling out the lectern with the big congressional seal on it, making sure the cameras were back far enough. It was amazing to be standing in the wings at that address.”

This spring, Kyler has continued his interests in equity and urbanism by working on the city council campaign for Kevin de León. He even brought de León to campus to speak at an Oxy Dems meeting, and the whole group decamped to the Tiger Cooler for an informal meal afterward.

We need informed citizens and informed voters. And I will be better at any job I do because I’ve been compelled by my classes to think critically, in different contexts.”

At Oxy, Kyler has developed a passion for creating equitable, livable cities in which human rights are foundational, which includes sustainable transit, housing for all, and policy supporting structural change. The liberal arts have allowed him to take theoretical coursework and apply it in the real world through internships and other pursuits.

“You get to have both theory and the real world with the liberal arts. It also forces me to think in different ways—like when you look at climate change in geology class as well as in a class on immigration refugees. You get a fuller understanding of those issues.

“We need informed citizens and informed voters. And I will be better at any job I do because I’ve been compelled by my classes to think critically, in different contexts.”