Clair Morrissey: The Philosopher in the Jungle 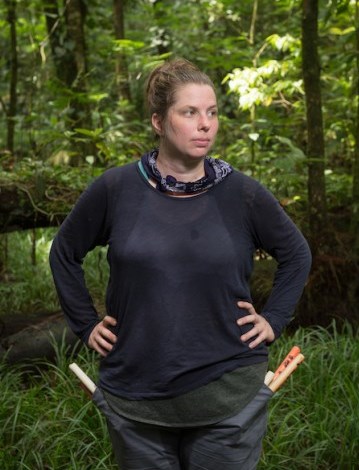 Last summer, Occidental College’s Clair Morrissey spent two weeks at the Organization for Tropical Studies’ La Selva Biological Station and Reserve in the Costa Rican jungle. It’s one of the last places on earth you’d expect to find a philosophy professor carrying out her research.

But Morrissey plans to return to La Selva this summer, thanks to a $10,000 Graves Award in the Humanities she recently received that will allow her to continue her exploration of the question of how scientific knowledge is related to valuing nature –- until now, a question of moral philosophy that has received little attention.

“Philosophers have been criticized for doing everything from the armchair," says Morrissey, an associate professor of philosophy who specializes in practical ethics. “I believe that to have something worth saying, you have to be immersed in the world."

Her latest project was inspired by a conversation she had last year with three of her faculty colleagues in biology –- Professor Beth Braker; Gretchen North, the John W. McMenamin Chair in Biology; and Associate Professor Shana Goffredi. “I thought their work with undergraduate researchers was really interesting, and that there was something I could contribute to structure a discussion about the moral issues involved in the work they are doing," Morrissey says.

As a philosopher whose graduate training included an examination of the ethical, legal and social implications of the human genome project, Morrissey’s curiosity was sparked by the question of how virtue is defined among scientists. “Virtue ethics and theory suggests that the way to become a good person is to practice virtue, and to adopt role models and be mentored by them," she says. “Beth, Gretchen and Shana have a sustainable mentoring community –- they are successfully training young people to be responsible scientists, and I wanted to see how they do it."

In studying the trees that make up the rainforest canopy, Braker, North, Gofreddi and their students see their work and the rainforest very differently than non-scientists do, Morrissey says. “They see details I don’t, and use a lot of ‘eye’ language to describe their expertise –- ‘She’s got good eyes’ is a common form of praise," she says.

“Is there a connection between being able to see that fine-grained richness and caring about it? Does appreciating nature require scientific understanding? If so, what does that mean? Does that expertise give you a heightened perceptual capability? These are the questions I’m interested in trying to answer."

That approach resulted in some experiences that are not ordinarily associated with the practice of philosophy. About to start an interview, Fishbein remembers going to grab a chair and suddenly realizing there was a snake on the floor. “Oh wow, there’s a baby fer-de-lance [a highly venomous pit viper] that I just stepped over in my sandals."

Encounters with snakes aside, Morrissey is convinced that this kind of innovative moral philosophy is far more likely to come from small liberal arts colleges rather than large research universities. “I know the biologists personally," she says. “Those kind of interdisciplinary interactions are harder to come by at an R-1 institution."

It’s a view that was reinforced by her trip to the 4th Conference of the Public Philosophy Network in Boulder, Colo., in February, where she presented a paper on her work at La Selva. “Many of the people engaging with the real world in a sustained way were from liberal arts colleges," she says. “Liberal arts colleges –- and community colleges, too –- are more supportive of innovative creative work like this."

While support for Morrissey’s first session at La Selva came from an Occidental Faculty Enrichment Grant, the Graves Award will make it possible to continue her research. Administered by Pomona College under the auspices of the American Council of Learned Societies, the Arnold L. Graves and Lois S. Graves Awards “encourage and reward outstanding accomplishment in actual teaching in the humanities by younger faculty members" by helping fund their research.

“Philosophers are a bargain -- they usually only need an office and a computer, and the occasional plane fare to a conference," Morrissey says. “There are very few funded opportunities for philosophers to talk to other people. That’s what’s so special about this Graves Award."

For the Aspiring Philosopher:

Letter from the Chair

It is my honor to welcome you, both current students and alumni, to the inaugural Oxy Philosophy Newsletter!

We hope the newsletter becomes a venue for keeping in touch about the accomplishments of our alumni, our students, and our faculty. Included in the newsletter are interviews with a current senior philosophy major and with a recent alum, as well as information on events the Department hosted throughout the year.

Below, I share student and faculty highlights from the 2016-2017 academic year.

We are proud of our five graduating senior majors, who successfully wrote and presented comprehensive projects on a range of interesting and important topics: David Avery (The Basis and Value of Friendship in Aristotle’s Nicomachean Ethics), Logan Justice (What Makes Good Science?), Brad Kawano (Judging a Book by Its Contents: A Critical Review of Miranda Fricker’s Epistemic Injustice), Rizwan Popatia (The Virtue of Death), and Jonathan Stoler (Get Rich Quick Using Backward Causation: Is It Rational?).

In Summer 2016, Jonathan Stoler and Myka Yamasaki were both funded by the Undergraduate Research Center’s Summer Research Program to pursue independent research projects, and Brad Kawano was supported by the Richter Program to do a community-based research project on the needs of diabetic patients at Centro de Salud Dávila Bolaños in Masaya, Nicaragua. In Spring 2017, Ari Nord studied abroad in Cape Town, South Africa through a CIEE Service-Learning Program, and Benj Salkind participated in the College’s Exchange in England program at the University of Bristol.

Our faculty continued to offer a range of courses dedicated to cultivating analytical skills in service of investigating central questions about what it means to be human or to live a human life. In each of our classes we teach students to read texts critically and charitably, to think analytically and creatively, and to communicate reasons and arguments clearly and cogently. Marcia Homiak offered her course on “Contemporary Political Philosophy" affectionately known as “the Rawls Class," and Saul Traiger taught “Philosophy of Mind." Alongside our long-standing course offerings, Carol Brighouse taught “Logic, Problem-Solving, and Education" a community-based learning course in which Oxy students teach high school students from LA River School basic logic, while learning non-classical logic; Dylan Sabo revived “Existentialism"; and I had the pleasure of introducing “Health and Social Justice."

The Department was awarded a Postdoctoral Fellow through the College’s Mellon Foundation Grant for Designing a Research-Intensive Undergraduate Curriculum in the Arts, Humanities, and Humanistic Social Sciences. Santiago Mejia (PhD, University of Chicago) began this position in Fall 2016, and taught “Introduction to Philosophy," “Ethics of Competition: Sports and Business," and “Being Good and Doing Good: Moral Philosophy Meets Empirical Psychology." Santiago has been offered a position as Assistant Professor at Fordham University’s Business School and we wish him great success when he begins there in Fall 2017!

We are also looking forward to two new faculty members joining the department in Fall 2017. Ryan Preston-Roedder (PhD, New York University) will be joining us as Associate Professor of Philosophy. Currently a MLK Visiting Scholar at MIT, he specializes in moral psychology, philosophy of religion, and philosophy and literature. Ryan has recently published a novel account of the moral virtue “faith in humanity," as belief in the basic decency of persons. Erica Preston-Roedder (PhD, New York University; MSPH, University of North Carolina – Chapel Hill) will be joining us as Mellon Postdoctoral Fellow in Fall 2017. Erica specializes in feminism, bioethics, and philosophy of psychology, and in addition to her work in philosophy, worked for five years as Director of Quality Management at North Carolina Quality Center, a non-profit dedicated to improving the quality of care in hospitals. Her current philosophical work concerns moral questions about grief.

Next year promises to be just as dynamic and exciting, as students continue to take advantage of opportunities to enrich their education both within and beyond the classroom, and faculty offer rigorous and innovative courses in philosophy.