Meet Michael Amoruso of religious studies, who teaches courses on religion in the Americas, including thematic courses on issues like race and ethnicity, politics and violence. 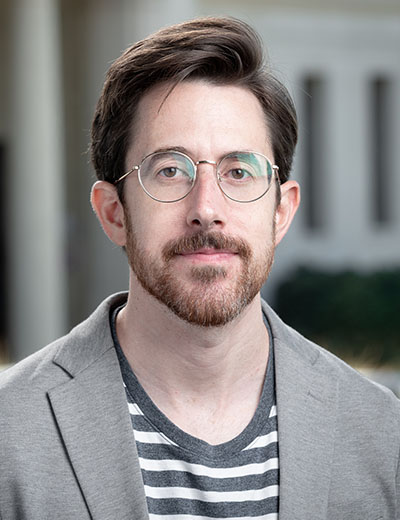 One of Oxy’s biggest draws was that it’s a small liberal arts college in a major urban center. I’ve valued the liberal arts education ever since I was an undergraduate, but have always felt more comfortable in big cities. In addition to the quality of the institution and its real commitment to teaching—to which some institutions only pay lip service—I was drawn to Los Angeles as a place to live, teach, and conduct research. Situated on the dual horizon of Latin America and the Pacific World, Los Angeles offers unique perspective on religion in the Americas today.

What are your early impressions of classroom life?

Oxy students keep me on my toes! So far, I’ve found them to be deeply engaged and careful thinkers who aren’t afraid to take risks.

My understanding of the value of a liberal arts education aligns with the College’s mission: I think it prepares students to be intellectually nimble in an increasingly complex and changing world. It’s hard to say where innovations like automation and machine learning—not to mention the rapidly shifting geopolitical order—will take us in the next 20 or 30 years. In the face of such uncertainty, it’s more crucial than ever to cultivate the transferrable habits of mind characteristic of a liberal arts education.

I think [a liberal arts education] prepares students to be intellectually nimble in an increasingly complex and changing world.”

Can you talk about the genesis of your current book project, Moved by the Dead?

In the summer of 2012, I went to São Paulo on a Foreign Language Area Studies grant. During that program, Jeffrey Lesser, a historian at Emory University, took our group on a tour of Liberdade, known as the city’s “Japanese neighborhood.” As part of that tour, he introduced our group to the Church of the Holy Cross of the Souls of the Hanged, a Catholic church that was named for the old city gallows that once stood nearby. Outside, a few priestesses of the Afro-Brazilian religion Candomblé were casting cowry shells. And inside, it was clear that people visited to practice a variety of heterodox devotions.

When I got back to the United States, I quickly drafted an application to a Fulbright grant for a research project based on the church. My research question was simple enough: Given freedom of religious expression in Brazil, why were people practicing non-Catholic devotions at this particular Catholic church? I began by framing my research in relation to theoretical work on “syncretism,” or the apparent mixture of different religious forms. I got lucky and won a Fulbright, which took me to Brazil for all of 2014. And soon after I arrived, I realized that the Church of the Holy Cross of the Souls of the Hanged was just one of several Catholic churches where, on Mondays—widely known as “the day of the souls”—droves of devotees came to pray for and petition for help from the souls of the suffering dead.

As I visited archives, talked to devotees, and learned more about the abundant ghostly lore that surrounded São Paulo’s most popular sites for the devotion to souls, my research interests shifted. It became clear that these places were oblique memorials to black history in a city whose physical structures have long been marked by whiteness. In a very literal sense, the ghosts of slavery and industrialization haunt contemporary São Paulo, and the devotion to souls is one way of confronting and remembering that social violence. So, my initial interest in rethinking religious mixture gave way to a focus on space, movement, and cultural heritage in urban Brazil.