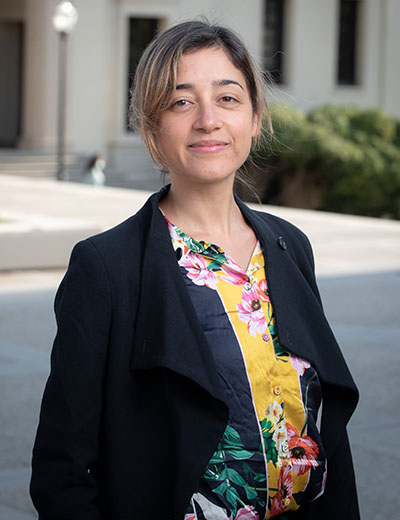 She has a B.A. in mathematics from the University of North Carolina at Chapel Hill and a Ph.D. in computational neuroscience from UC San Diego. Prior to coming to Oxy, she was a postdoctoral researcher in the human information professing lab at the University of Oxford, where she studied the computational principles underlying rapid learning and flexible decision-making in novel environments.

Small classrooms and community feel all in a dynamic metropolitan setting; we truly have the best of both worlds. It has been exciting to expose Oxy students that may not feel they belong in STEM, just due to cultural messaging, to neuroscience and computer science. Because the school is small, I have been able to get to know my students on a personal level, and take joy in being able to watch my students’ interests and understanding grow. On top of that, Occidental has access to tons of resources due to its location, one of my favorites being the vibrant community-based programming at OxyArts. Finally, I am excited about the potential for my lab’s research to continue to grow and evolve through the resources provided by Oxy’s Undergraduate Research Center, as well as relationships within the rich scholarly environment of Los Angeles.

I love how Occidental students are intelligent and detail oriented, but still open minded and eager to make cross-disciplinary connections. I think that is the essence of the liberal arts education.

What are your impressions of Oxy in general?

I love how Occidental students are intelligent and detail oriented, but still open minded and eager to make cross-disciplinary connections. I think that is the essence of the liberal arts education. The student body is so close-knit—Oxy’s students can depend on the safety net of this community which is so invaluable in college, especially in times like this. On top of this, Oxy students are incredibly well rounded and engaged in everything from pressing social justice issues to the latest fashion trends.

Where did you develop an interest in cognitive science?

As a child, I was fascinated by the question of whether my color “blue” was the same as everyone else’s. Everyone was creating their own private worlds inside their heads and I wanted to peek into each and every one of them. In high school, I was interested in becoming a psychologist, but then took a calculus class my senior year. I had been a pretty poor mathematics student up until then, but in those classes I became entirely enamored with the concept of infinity. That same year I took several philosophy classes, which showed me how the same type of logical reasoning I was using in my mathematics classes could be deployed to understand difficult-to-define concepts like agency and consciousness.  So, in college I completed a mathematics major while doing research in psychology and neuroscience, and continued along these lines in graduate school at UCSD and my postdoctoral research at Oxford. Cognitive Science rests upon a foundation of mathematics, psychology, philosophy and computer science (among other subjects), and so I was thrilled when I saw Occidental’s job advertisement.

You have researched and talked extensively about visual information processing. What exactly does that entail?

When you think about it, visual perception is a miracle. How does our brain make sense of the world? There is plenty of evidence that visual perception involves many more “top-down” mechanisms then we ever thought—our brain fills in so many gaps. In a given moment, most of what we are perceiving is what we expect to see, as opposed to what is truly in front of us.

More generally, I am interested in comparing the coding schemes used in the human brain with those that emerge in artificial neural network models to glean more general computational principles. What is necessary and sufficient for supporting complex behavior and intelligence? Visual perception is a relatively extensively studied field in neuroscience, and so it is fertile grounds for testing and validating models. I have since begun to take this approach beyond visual perception into the domain of learning and inference—imagine figuring out how to use foreign coins when traveling, or operating a strange shower in a hotel room. Do similar “top-down” mechanisms help us make novel decisions in this complex and ever-changing world?