After more than 60 years of sitting in oak case drawers, the 60,000-plus specimens in Oxy's Moore Lab of Zoology are more vital than ever, as advances in DNA sequencing technology offer new windows into genetic research

Two years ago, when Madhvi Venkatraman '13 started her research into subspecies divergence among the Unicolored Jay, she was barely aware of the 60,000-plus collection of bird specimens housed in Occidental's Moore Lab of Zoology—including the largest collection of Mexican bird species anywhere in the world. "I was amazed that I had been at Oxy for two years and had not seen it," says the biology major from Chennai, India, who has also done research at Harvard and the Smithsonian Institution's National Museum of Natural History. "It is absolutely incredible." 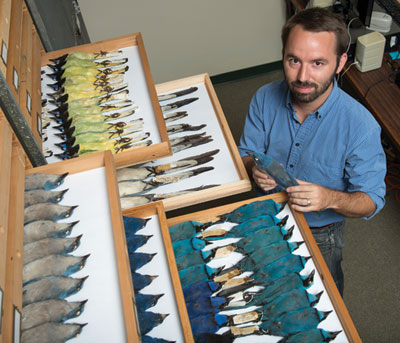 Thanks to advances in DNA sequencing technology, the lab's one-of-a-kind collection promises researchers a trove of heretofore unavailable genetic data that will revolutionize studies into how and why birds evolved. "The Moore Lab specimens harbor information that will last forever," says Venkatraman, one of several students who will help assistant professor of biology John McCormack with DNA sequencing this semester. "As methods of study improve and new researchers work with the collection, they will open up entirely novel facets of information that the original collectors could not have imagined."

McCormack himself doesn't need to look far for inspiration. His second-floor office at the Moore Lab is a veritable aerie, affording birds'-eye views of Occidental's Sycamore Glen. There, among the 50- to 100-year-old stand of Western sycamores and coast live oaks, can be found many of the 76 avian species that call the College home. (For those of you counting, there are 1,400 trees on campus—75 total species, 25 of them native.)

The irony isn't lost on McCormack, the lab's curator and one of the world's preeminent experts on Mexican bird species. McCormack has spent the bulk of his academic life researching the Mexican Jay, a pine and oak forest dweller whose habitat stretches northward to Arizona. The nearest jay may be hundreds of miles away, but Occidental suddenly—even unexpectedly—has become ground zero for the study of Mexican bird species.

"The Moore Lab just kind of fell off the map. People forgot it was there," McCormack says, noting that the collection has historically been used for rudimentary study. "For a long time, museum specimens were used mainly to take measurements from, or maybe look at their plumage color. People were making decisions about what was and wasn't a species based on those characteristics."

Not anymore. With the clip of a bird's toe pad, McCormack can tap DNA data that will help researchers better study the role of habit degradation, for example, on a species' genetic diversity. The molecular revolution that started in recent years means researchers can sequence large numbers of DNA at once, a development McCormack likens to fishing with a trawling net instead of a spear. In one technological leap, he adds, the Moore collection is at the forefront of evolutionary biology.

Many groups of Mexican birds are poorly described in terms of their genetics, he says. Researchers in the past have chiefly relied on a bird species' phenotype, or appearance, in developing profiles. In addition to DNA advances, scientists also are using new techniques that include remote sensing satellites, which can provide massive amounts of information on a particular ecology, such as temperature, rainfall, canopy type, and tree type.

By linking phenotype with genetics and environment, McCormack hopes to answer important questions about how birds evolved and why. Answering those questions can help societies protect and nurture biodiversity.

Right now, McCormack says, he and students are "picking out interesting questions in the evolutionary biography of Mexican birds that can only be done with specimens here in the Moore Lab." One of those species is the rare Wood Partridge, a medium-sized ground bird that comes in three varieties.

"They exist in three different highland areas in southern Mexico and Central America," he says. "One of them is highly endangered. You're not going to get fresh tissue from them, but we have three specimens from the three different species."

At Oxy, students can expect to get more exposure to the collection, according to Dan Pondella '87, associate professor of biology and department chair. After a review of the department by the Dean's Office, "we wanted to integrate the collection more into our curriculum," Pondella says. "We also wanted a tighter synergy between the museum and the department within the campus.

"The collection represents a historical resource that you can't duplicate," he adds. "No one can go out today and collect those birds. Some of them are extinct, some of them are protected. It would be impossible to get the permits to do it. The scale of study is unlikely to happen anytime in the near future."

McCormack expects DNA sequencing of the collection to take years. Early data will be posted to an online database next year called VertNet that is funded by the National Science Foundation. VertNet is an attempt to list all museum holdings of vertebrates in a single online clearinghouse. "It's going to be an unprecedented database, and it's going to expose the Moore Lab collection to the eyes of the research community for the first time in 30 to 40 years," McCormack says. "We expect quite an uptick in interest." 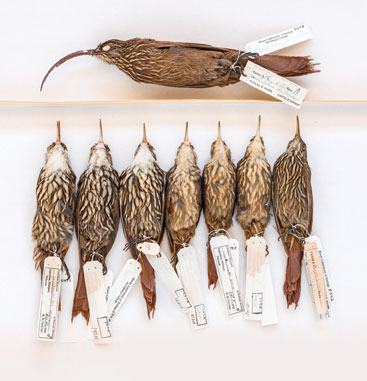 The College's birds have lain in oak cases at Moore Lab since 1951, when Pasadena businessman, philanthropist and Renaissance man Robert T. Moore gave his collection to Occidental with an endowment to support it. The New Jersey native was a bird enthusiast who looked south of the border because in the early to mid-20th century it was the "great undiscovered land of birds—terra incognita," McCormack says. (The collection was amassed by Moore's associate of 22 years, Chester C. Lamb, who gathered more than 40,000 bird specimens from Mexico for Moore, as well as nests, eggs, and mammal specimens.)

McCormack himself developed an interest in birds as an undergraduate at the University of Arizona. He started by analyzing the mating behavior of the Mexican Jay, and then began to consider questions of evolutionary genetics. He went on to earn a doctorate in biology from UCLA. It was during that time that he learned about Moore Lab, home to 300 Mexican Jay specimens. The samples proved invaluable to his dissertation.

"I was just blown away," recalls McCormack, who back then got the stirrings of an idea. "I thought it would be amazing to work here. I just didn't think the job would pop up anytime soon." With the 2010 retirement of professor of biology John Hafner, McCormack swooped in: "Really, it was a job I had staked out in advance."

McCormack has wasted no time raising the collection's stature. He's given the lab a Facebook page, and he's hosted public tours of the facility. He teaches courses in evolution, ornithology and avian biology, and he's planning birding field trips in Los Angeles—where students can see everything from shorebirds to alpine species in a single day's survey. Much like the city itself, the local ecology is prepossessing in its diversity.

"We have habitats ranging from below sea level to above 10,000 feet in the local mountains, and it's all concentrated in a relatively small area," says Elizabeth Braker, associate professor of biology. "Some people would say the number of species that are restricted to Southern California is higher than any comparable area on the planet."

Don't count out Oxy, where coyotes and parrots join squirrels and foxes in a wildlife smorgasbord all its own. Braker is working with McCormack to develop a field guide to highlight the trees, birds, plants, and animals that cohabitate on campus.

As for Moore Lab, the heightened attention is just what the department—and Occidental—have in mind. "The collection just wasn't being utilized in a way that was visible beyond its walls," Pondella says. (In addition to its bird collection, Moore is home to 9,000 mammals—mostly rodents from the Great Basin region of California, Utah, and Nevada.) "It hasn't been the kind of thing that most people would appreciate because they just didn't know about it."

One of McCormack's next projects is to find a better way to safeguard the bird collection against occasional infestations of carpet beetles, which nosh on the birds' brittle hides. But technological advances mean even damaged or degraded skins can provide usable DNA.

Students are busy at work in the lab, whether it's sequencing DNA, doing independent research, or simply helping to make the lab functional. Many of the students are premed majors who are fulfilling biology requirements. McCormack is unaware of any other liberal arts college that is organizing species collections by genetic information.

McCormack has drawn recent acclaim from his peers. The American Ornithol­ogists' Union Checklist Committee credited him for identifying a new species of the Mexican Jay, which he named the Trans­vol­canic Jay. The peculiarities came down to DNA.

"There were subtle but significant differences in their morphology. One of the species was larger and more purple in color than the other, but really the big difference was in the genetics," says McCormack, whose office bookcase is adorned with a wooden Mexican Jay with a clutch of eggs. "You'll find they've been diverging from one another on separate paths for millions and millions of years.

"Right now, we're only scratching the surface in terms of finding the real diversity that's out there," McCormack adds—and it shouldn't be that long before exciting discoveries start flying out of Eagle Rock.

Freelance writer Andy Faught of Fresno wrote "The Brief Life and Long Shadow of Donald Loftsgordon '50" in the Spring issue.