Fascinated by sharks from an early age, marine biologist Lisa Natanson '81 takes to the ocean, her $17 knife close at hand, to explore the mysteries of nature's most toothsome predators

Before the shark arrives, Lisa Natanson '81 will pull on her pale green rain boots, the ones decorated with illustrations of sunflowers and splattered with blood, and begin to sharpen her blade. 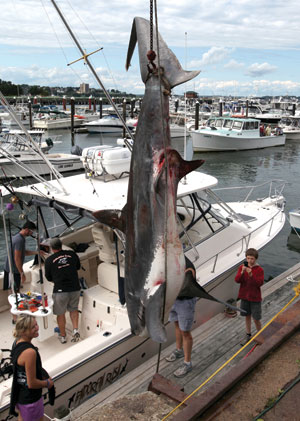 The 6-inch Dexter boner knife isn't expensive—it retails for about 17 bucks—but it has an easy-to-grip carbon-wood handle and a razor-sharp blade, and it's Natanson's tool of choice; it has been for decades. But as much bite as it has, woe to the person who puts blade to shark skin without sharpening it first. The skin of a shark is extremely rough (think industrial strength sandpaper), and Natanson has cut herself more times than she can count, and that's after dragging the blade across a sharpening stone two dozen times.

She will know that the shark has arrived when the crowd that has assembled around her—a crowd that can number in the hundreds and is separated from her by a rope line similar to the kind you see when a politician greets voters at a campaign event—begins to murmur and then exclaim loudly at the sight of the ocean's most storied predator.

After it is lifted up on a wire and displayed for the crowd, the fish will be weighed, its species and sex noted, and then it will be brought to Natanson. First she will measure it, and then she will dissect it (to the delight of some, the disgust of others). Wielding the boner knife, Natanson will open the shark's belly, making an incision from the fish's anal vent to its gills; the skin will part, and right in Natanson will go, elbow deep into the cavity. She will pull out organs—stomach; liver; testes, if it's male; ovaries, if it's female. She will remove a section of backbone to try and determine how old the shark is (more on that shortly). And then she will be done.

She will repeat this effort about a dozen times on six different occasions during the summer months. It's an annual rite for the marine biologist assigned by the National Marine Fisheries Services to the Apex Predators Program—one of the world's premier sources of knowledge and understanding of one of the most mysterious creatures on the planet.

With an ancestry that dates back more than 400 million years, sharks simultaneously bewitch and bewilder. "It is a predator, it lives in an environment that we dip into, it is big, they can get us," Natanson says. "And they are unknown; we're hardwired to fear the unknown."

She is talking about why we as humans are fascinated with sharks, but she also could be describing her own obsession with the fish. She remembers precisely the age at which the obsession began. She was 7 years old and growing up south of San Francisco, near where the bay meets the Pacific Ocean. During the summer and fall, these waters teem with sharks, drawn to the area by plump seals and sea lions and warm sea temperatures.

At 18, Natanson brought this fascination south to Occidental, attracted to the College's marine biology program, and the interest never wavered. She became a research assistant for professor John Stephens Jr., logging many hours aboard the Vantuna, Oxy's marine research vessel. Stephens nurtured her interest in the field and encouraged her to continue her studies after graduating. (Another student of Stephens', John McCosker '67, documents the West Coast migratory patterns of the great white shark as chairman of aquatic biology at the California Academy of Sciences in San Francisco.) Natanson subsequently earned master's and doctoral degrees from the University of Rhode Island, and then went to work for the National Oceanic and Atmos­pheric Administration and its National Marine Fish­eries Service.

In any given year, Natanson will spend winter months in her Rhode Island lab, spring and fall out on the ocean surveying sharks, and the summer attending shark-fishing tournaments up and down the East Coast. Though she spends far more time on boats and in her lab than at the half a dozen or so shark tournaments she attends, the events—and her very public role dissecting the captured fish—command the most attention.

During the last decade, Natanson has found herself at the center of a storm of criticism centered on the perceived injustice involved in capturing and killing sharks as sport. The Humane Society of the United States and various other citizen activists have declared the practice cruel and a threat to the shark population and have campaigned to abolish the competitions.

Natanson and others counter that the tournaments have evolved over the years to include regulations that are more stringent than current federal guidelines (for instance, all undersized fish are caught and released, and many tournaments report that 98 percent of the fish caught are released, and NOAA scientists have determined that the events are not impacting the coastal shark population.

"It would be a big waste for us not to be there," Natanson says. "We are taking advantage of a situation where there will be mortalities. What we can learn from these samples, the biological data that we collect, advance our understanding, and aid in conservation."

And it's not just the 12-15 sharks that are brought in and dissected by Natanson and her team, but the dozens of other, undersized fish that are caught and tagged by fishermen before they are released. ("Far more sharks are tagged and released than caught," Natanson told the Cape Cod Times this summer. "We [couldn't] even supply enough tags.")

The tagging effort is part of the NMFS's Cooperative Shark Tagging Program, a collaborative effort between both recreational and commercial fishermen and NMFS scientists. Initiated in the early 1960s, the tagging program began as scientist-led effort to both keep track of and chart and measure changes in sharks up and down the Atlantic Coast. Quickly, though, the fisheries service realized that biologists could only tag so many sharks; they subsequently enlisted volunteers to aid in the effort. During the last half-century, the volunteer base has expanded from 100 or so taggers to more than 8,000. During this time, more than 250,000 sharks have been marked.

Natanson explains that the basic information gained from volunteer tagging—date, location, size, and sex of shark—greatly enhances biologists' understanding of migratory patterns, age, and growth of sharks, and without the cooperative program, scientists would have nowhere near the sample size necessary to conduct meaningful research.

To both supplement the tagging effort and to expand on the work that volunteers have initiated, Natanson leads a coastal shark survey every two to three years that takes her up the East Coast from Delaware to New England during the spring months.

Natanson and her team will not only catch and tag (or retag) sharks, but they will dissect any fish that is dead or dying and will also implement a protocol that is not feasible for fishermen to take on. For instance, Natanson will inject sharks with a 25-milligram dose of tetracycline, a procedure that will aid biologists in the future if they are ever to study that shark post-mortem.

Sharks injected with tetracycline will absorb the antibiotic in their backbones in places where growth is active. If that shark is dissected at a later date, biologists will place its vertebrae under an ultraviolet light; the tetracycline mark will glow, while growth prior and subsequent to the mark will not. This technique will help biologists measure and chart not only growth, but, when combined with the age of the shark, can help validate age studies. It is believed that most sharks' age can be determined by pairs of opaque and translucent bands present on its backbone ("kind of like rings on a tree," Natanson says); by comparing bands with growth areas, biologists can learn at what age sharks reach maturity. (The tetracycline administration can also help show which shark species do not follow the annual band periodicity, an area of particular research interest to Natanson.)

After the 2009 survey, the NFSC press office issued a release touting the record number of fish tagged and released that spring. During the six weeks that Natanson and her team were at sea, they caught 1,675 sharks from 19 different species and tagged 1,352 fish. This past spring, "we caught more than before," Natanson says. "It's nice to see that it's happened again."

Nice for several reasons, she explains. Nice that the shark population along the East Coast is healthy and thriving, and nice that the biologists are accessing so much information to be added to their growing database back in Rhode Island. "There is so, so much we don't know," Natanson says—after all, 50 years of study on a creature that has evolved during the last 400 million years is a mind-boggling discrepancy to consider. "But with every year, every survey, every dissection, even just obtaining the most basic biological information, we are learning about the life histories of these magnificent fish."

This fall, Natanson embarks on a month-long excursion to the Grand Banks, the storied area of the Atlantic Ocean southeast of Newfoundland, Canada. This is where the cold Labrador Current meets the warm Gulf Stream, which makes it a bi-way of sorts for fish, and a mecca for fishermen (the ocean locale of The Perfect Storm). Natanson will be tagging along with the Eagle II—a vessel made famous by its inclusion on the Discovery Channel program "Swords: Life on the Lines"—just as she has for the five previous autumn trips. It's not a pleasure outing. "Not a lot of scientists want to do that trip," she says. "It's long, and the conditions are rough." And she's not just talking about the notoriously frightening weather. She's the only scientist on the boat, and while she gets along great with the crew, they don't want to catch sharks. They are focused on catching as much swordfish as they possibly can. Still, "there are a lot of sharks up there," Natanson says, and the crew gives her access to every shark that they have (unintentionally) caught.

"I've been able to tag 3,000 sharks in five years," Natanson exclaims. (And it is an exclamation: She says this the way a diehard Dodgers fan would announce he or she had just met Tommy Lasorda.) "I can't imagine another place I'd rather be."