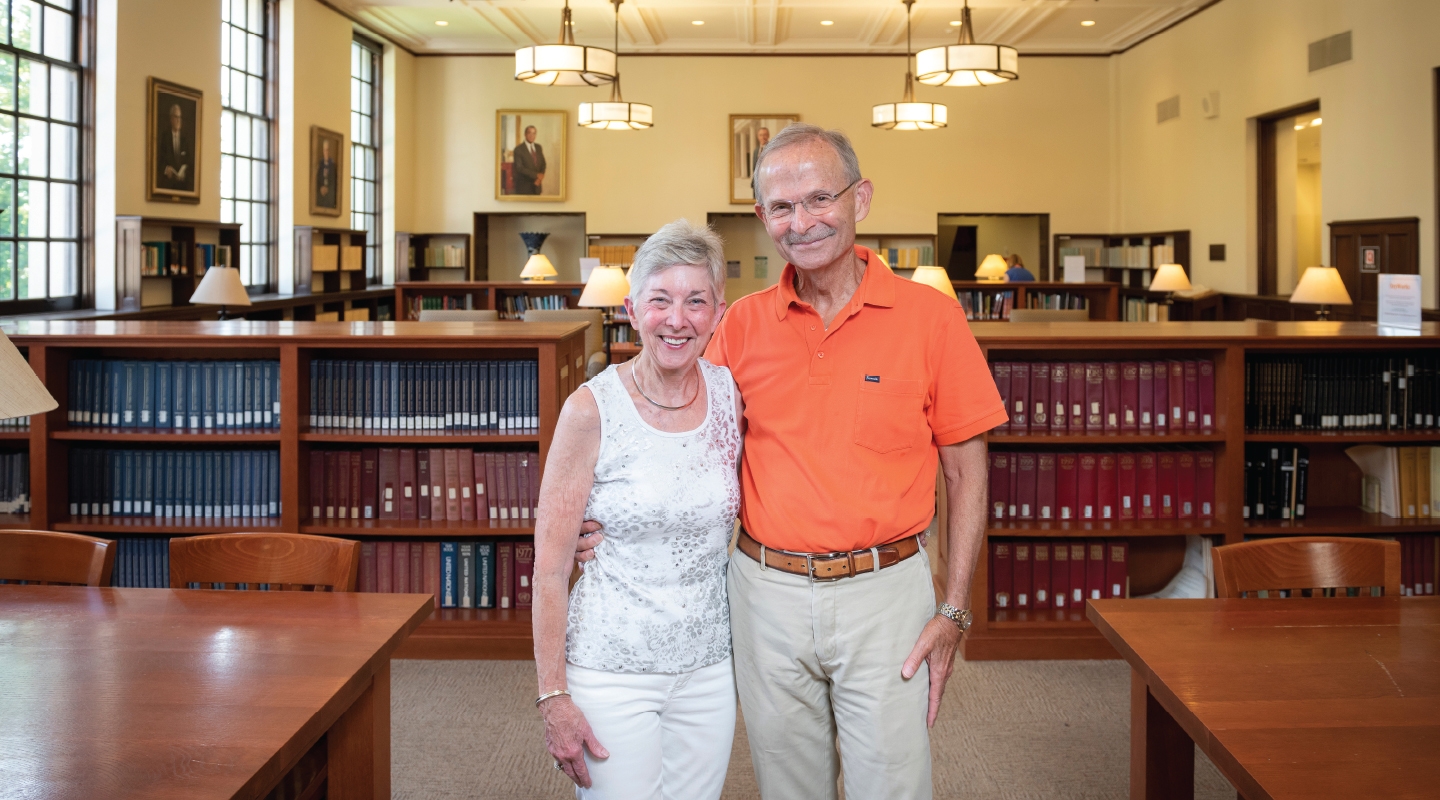 From the start, Mike Gibby ’68 and Barbara Nogy ’68 seemed like complete opposites. Mike, a chemistry major from Fillmore, spent most of his time studying in the library stacks or conducting research in the lab with Carl F. Braun Professor of Chemistry Frank DeHaan. Barbara, a religion and psychology double major from Wichita, Kan., sang in the Glee Club, typed recruitment letters for football coach Jim Mora ’57, and served as president of Associated Women Students.

But almost 50 years after they were married in Herrick Chapel by Keith Beebe, the David B. and Mary H. Gamble Professor of Religion, the Gibbys are in complete agreement on the fundamental impact Oxy had on their lives. “The education I got in the sciences and mathematics was really sound and held up well in graduate school,” says Mike, who earned his Ph.D. at MIT and in 1985 founded Arion Systems, the engineering service company focused on national defense and intelligence markets that he still heads today. Barbara, a first-generation scholarship student who lists Beebe among her favorite professors, earned two master’s degrees and became a pioneer in special education, retiring as a public middle school administrator.

That shared experience is why the Gibbys made a generous gift—in conjunction with their 50th reunion last year—to establish the Michael G. Gibby ’68 and Barbara J. Gibby ’68 Endowed Professorship for ­Science. “We wanted to hit the core of a liberal arts education,” Mike says. Barbara concurs: “We wanted to do something where it really makes a difference.”

Margi Rusmore, a member of the Oxy faculty since 1985 and an internationally known researcher in structural geology and tectonics, will become the inaugural Gibby Professor of Science this summer. “I was really surprised—it’s quite an honor,” Rusmore says. “I am deeply grateful to the Gibbys for recognizing the central role of the faculty in their education at Oxy.”

“We’re delighted that Margi was selected as the first Gibby Professor. She has all the hallmarks of an Oxy professor: intelligent, accomplished, challenging, engaged and engaging, and always approachable,” Barbara says.

As a structural geologist, Rusmore studies the evolution and growth of continental margins with a focus on the mountain ranges of the western portion of North America. “The middles of continents are very inert geologically,” she explains. “I’m interested in how something that stable becomes so complicated at the edges and what that tells us about how the Earth evolved.”

Gretchen North, the John W. McMenamin Endowed Chair in Biology, called Rusmore “the model of what a science professor at Oxy should be” in her letter of recommendation. “She does leading-edge research, serves as an international leader in her profession, improves the intellectual and day-to-day lives of her students and colleagues, and exemplifies science as an inclusive endeavor, one that she actively encourages students from a broad range of backgrounds to join.”

A Fellow of the Geological Society of America, Rusmore has written more than two dozen publications and dozens of abstracts on her research, a number of which include her students as co-authors. “It is no surprise why Oxy does so exceptionally well at having its science graduates continue to the Ph.D. level,” Mike says. “The undergraduate research program which was just beginning to pick up steam in the late ’60s was very important to the career trajectories of many of us.”

Unlike many endowed professorships, the Gibby Professor is not limited to a single discipline. It can be awarded to any professor who has achieved distinguished and notable success in their teaching and scholarly work in biology, chemistry, computer science, geology, mathematics, or physics.

“We can truthfully say that we never had a poorly instructed class at Oxy; some were brilliantly taught,” Mike says. “Frank DeHaan’s Physical and Inorganic Chemistry, Frank Lambert’s Organic Chemistry, and Tim Sanders’ Modern Physics immediately come to mind.”

The Braun professorship held by Mike’s mentor, DeHaan, is one of just four other endowed professorships in the sciences—none of which were funded by alumni. That means there are still plenty of opportunities: “We are hoping others will do likewise,” he hints.