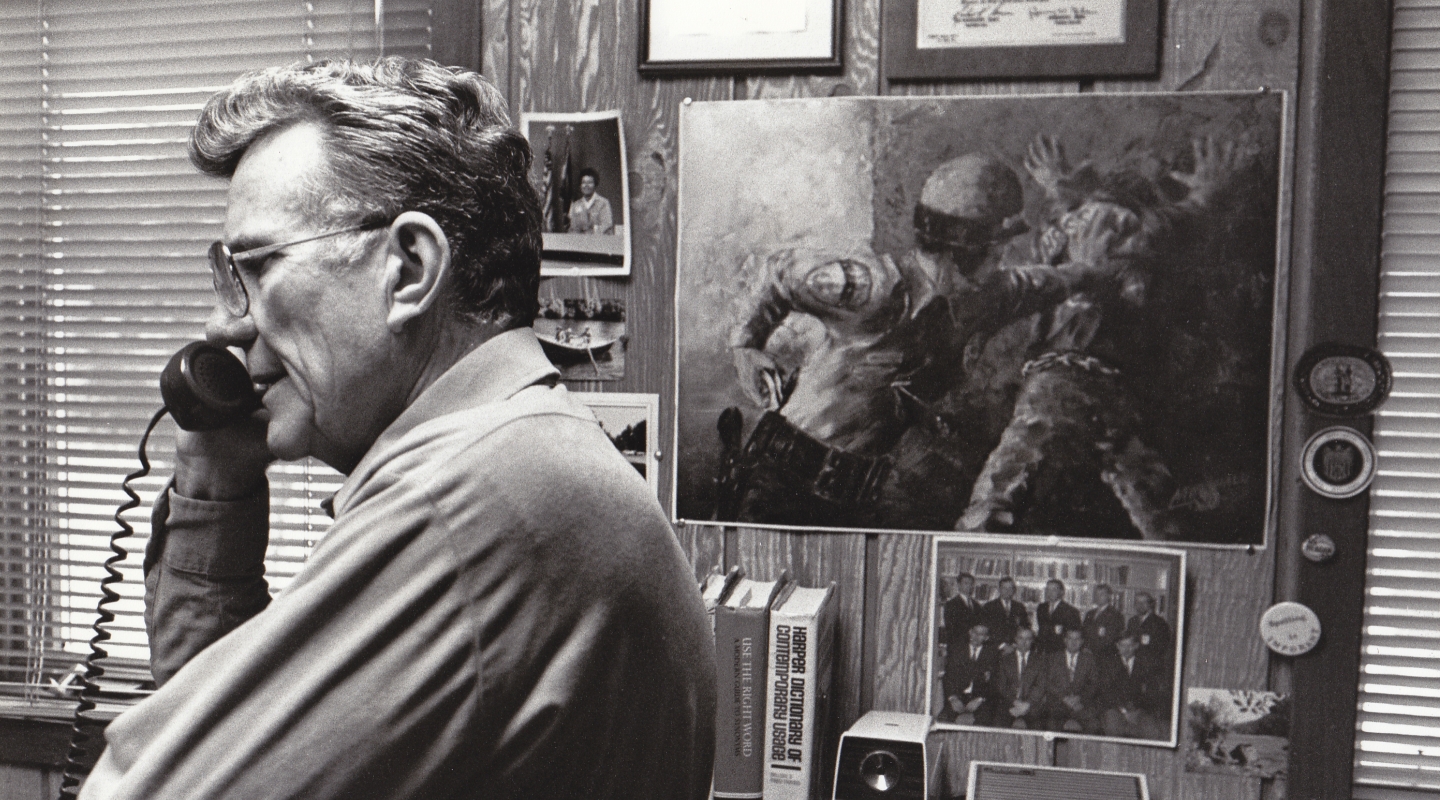 Utilizing patience, persistence, and imagination, Pierce Brooks '49 collared many a felon by outthinking his prey

If Pierce Brooks '49 were Sherlock Holmes—to whom the legendary LAPD homicide detective was sometimes compared—it might be called "The Case of the Incongruous Ice Tray." Brooks was reviewing old photos from an unsolved rape-and-murder case when he noticed an ice tray left on a kitchen counter in the victim's home. The prime suspect, a door-to-door salesman, told Brooks under interrogation that the victim had given him a glass of water before he left her home. Brooks surmised that the housewife would not have left an ice tray on the counter in her otherwise immaculate home—"Unless, of course, she was already dead." The salesman received a life sentence.

Ever meticulous, Brooks solved another case by tracing a matchbook found on the victim's body from Los Angeles to Portland, Ore., and back again to the killer in L.A. "With his precision and his dedication, there was nobody better at that type of work," Dan Bowser, Brooks' former LAPD partner, told the San Francisco Chronicle.

More than a decade after his death in 1998, the zealous detective is best remembered for leading the famed "Onion Field" police murder investigation in 1963, and later for pioneering the profiling and tracking of serial killers. Brooks "wanted to be a policeman since he was a little boy," recalls his son, Mike Brooks, 62, of Puyallup, Wash. "He was fascinated by police work. He felt like he was a good guy, and he wanted to put the bad guys in jail—that was the best way he could serve his country and his community."

A third-generation Angeleno and fourth-generation Californian, Brooks enrolled at UCLA in 1941. His studies were interrupted by World War II, during which he served as a blimp pilot in the Navy (skills he would later put to use in Howard Hughes' employ). He joined the Los Angeles Police Department in 1948 while completing his studies in political science at Oxy. "As a college man, I was a rare breed [in the department] in those days," Brooks recalled in a 1971 interview. "They assigned me to the jail and gave me the job of filing warrants and explained how to alphabetize them. I thought they were kidding."

Once he served his probationary period, Brooks worked his way up through patrol, vice, robbery, and narcotics to the homicide division. Brooks was head of the LAPD's intelligence division in 1963 when a Los Angeles police officer was found dead in an onion field near Bakersfield. He interrogated the two suspects at length, taking them back to the scene of the crime and asking them to reenact what had happened. "Neither of them has been reluctant to talk," he told the Los Angeles Times during the pair's trial.

"You've heard of the 'good cop'/'bad cop' technique? Dad taught me that you never use 'bad cop,'" says Dan Brooks, 57, who followed in his father's footsteps and became a career police officer in West Covina. "The way to get people to confess is not to scare them into a confession, which rarely works—instead you are nice to people and show them respect, no matter how heinous their crime has been."

Brooks had a fascination with murderers, especially "motiveless" murders. As a young detective, he quickly noticed that certain killings stood out. "A husband kills his wife. He shoots her. That's one thing," he told the L.A. Times in 1984. "But there's another kind. I mean where the victim is just muti­lated. … And she's a stranger. He doesn't even know her. That sure as hell is different."

He didn't know it, but Brooks was on the trail of a new conception of certain murderers—the serial killer. "He was very analytical," Mike Brooks recalls. "He tried to get into serial killers' heads to figure out what their next move was going to be."

Ironically, it was Brooks' ability to mimic the serial killer's cool detachment that made him such a successful detective. "I can go into the most bloody, hideous murder scene imaginable, and not be moved," he told Northwest magazine in 1983. "If the victim is a small child, I probably can't help feeling some emotion. … But it dissipates very quickly. You can't be emotionally involved. I don't ever remember tossing and turning and having sleepless nights about a case. I just didn't."

"The only time I remember him being really, really upset is when that policeman was killed in the onion field," recalls Joyce Brooks, 80, who married the detective in 1962. "We got the call around 2 a.m. He stormed through the house and swore, and then I didn't see him for three days. He went up to Bakersfield. That was probably the most upsetting thing for him, knowing what those two officers went through."

Brooks gained national notoriety in 1973, when his role as the lead investigator was featured in The Onion Field, former LAPD detective Joseph Wambaugh's bestselling account of the then-10-year-old case. (A film adaptation followed in 1979, with Ronny Cox portraying Brooks.)

"[At 41], Brooks was already reputed to be the best homicide detective in the department, an honor usually accorded only much older men," Wambaugh wrote. "He was a round-shouldered shambling man whose slouching walk and baggy suits belied the body underneath. … When asked by strangers at parties what his police duties were he'd reply, 'Catching felons.' And when asked what his hobbies were he'd reply, 'Catching felons.'"

"I would like to think it was accurate," Brooks told the Los Angeles Times in 1984, of the way he was depicted by Wambaugh. "I take a lot of pride in my work."

In 1967, Brooks received the J. Edgar Hoover Award for excellence and graduated first in his class of 100 at the FBI National Academy, a 10-week professional course of study for law enforcement officers. While with the LAPD, he worked as a technical adviser to Jack Webb on the TV shows "Dragnet" and "Adam-12." In 1974, the "thinking man's cop" received a master's in social psychology from the University of Northern Colorado. L.A. deputy district attorney-turned-author Vince Bugliosi "said he was one of the most intelligent men he ever met," Mike Brooks recalls.

After 21 years on the force, Brooks retired as a captain with the LAPD. Eager to leave the smog and sprawl of Los Angeles with his second wife, Joyce, he realized a lifelong goal when he was appointed police chief of Springfield, Ore. (population: 27,000). A 1969 profile of Brooks in the Eugene Register-Guard described how the new commander, at a squad meeting with his officers, shared photos of past colleagues who were killed in the line of duty. "The men stared at the faces soberly, almost reverently, in a mood quite close to hero worship. Then Brooks let them have it: 'These guys are not heroes,' he barked in a voice tinged with contempt. 'They were dumb policemen, guys who made fatal mistakes. I want you to know about each one and learn the lesson, because I don't have time to go to a lot of funerals.'"

Brooks alienated some with his aggressive reforms and by-the-book attitude. Soon after arriving in Springfield, he created a stir by firing numerous officers whom he said "never should have been policemen to begin with," an action that prompted a grand jury investigation. ("I have low tolerance for incompetence," he later said of his actions.) Brooks was ultimately cleared of any wrongdoing, and even praised by the panel, but his stint in Springfield was a short one.

In 1971, Brooks became police chief in Lakewood, Colo., whose progressive approach to law enforcement (emphasizing college training for its police officers) was more in line with his M.O. But his predilection for unsolved mysteries prompted him to take action following the 1975 killings of nine homeless people in Los Angeles by the "Skid Row Slasher." He called his former LAPD colleagues when he read about the murders, connecting them to a pair of 1964 murders.

"Since that [earlier case] was never solved," he told the L.A. Times at the time, "I've always wondered what jail or nuthouse that guy was in, because someone who kills like that doesn't just stop. I'd say there's a good chance it's the same s.o.b. come back to haunt L.A." Once again he was right: Vaughn Greenwood (who spent more than five years in an Illinois prison for attempted murder between the two killing sprees) was connected to the 1964 murders as well.

Before computers became commonplace tools in police work, Brooks used to frequent local libraries, combing through newspapers from different cities looking for similar crime stories and anything that suggested a pattern or a common denominator. "He would dive in and wouldn't give up," Mike Brooks says.

The motivation, according to his widow, Joyce, was that Brooks didn't like it that these faceless killers "were getting away with what they were getting away with, and no one seemed to be able to figure out what was going on. I think it was something that he just had to figure out. It was really important to him to know why people did something like that." And, of course, he wanted to stop them before they killed again. He also had an unfailing moral sense, Joyce says: "If a bad guy did something, he should go to jail."

Although commonplace today, the whole concept of serial killers was just catching on in the 1980s. (One earlier term was "traveling lust murderer.") Brooks was the first to define serial murders as repeated killings by the same person, with sexual overtones and usually female victims, and to come up with the idea of a nationwide database to track similar crimes. He made headlines with an L.A. Times interview in 1984 when he suggested that perhaps 8,000-12,000 serial killer-type murders were committed each year, far above most estimates of 300.

After his last stint as police chief of Eugene, Ore., Brooks retired in 1981 from formal police work but became an expert on murder and serial killers who lectured at various universities about criminal investigation. He spent his retirement years in Vida, Ore., but remained an investigative consultant to law-enforcement agencies on high-profile cases, such as the 1980 Atlanta child murders, the Green River slayings in Washington in the 1980s and 1990s, and the poisoned Tylenol case in Chicago in 1983.

While Brooks usually worked behind the scenes, in 1983 he testified before Congress about the necessity of creating a nationwide criminal database. Two years later, then-FBI Director William Webster credited Brooks with helping create the National Center for the Analysis of Violent Crime and supervising the development of the Violent Criminal Apprehension Program, a computerized database designed to track serial killers by analyzing patterns between crime scenes, behavior patterns, and personality traits.

Considered by his police peers to be amazingly wholesome, Brooks rarely drank, although he did have a three-pack-a-day cigarette habit for years. He attended church only occasionally, however, saying the things he had seen in his work had eroded his faith. One constant throughout his career was that Brooks always penned his memos in green ink—and forbade others to use the color. "Whenever somebody did something wrong, he'd write in green pen, 'See me—PRB,'" Joyce Brooks recalls. "He was a stern taskmaster. They knew better than to try to put anything over on him."

In 1976, in an attempt to save police officer lives, Brooks wrote a book on police officer safety called Officer Down, Code Three. Considered a master interrogator, he also co-authored a guide for police and prosecutors on criminal confessions, The Law of Confessions (1985).

One case that frustrated him to the end of his life was an unlikely one—Victorian London's Jack the Ripper. Even in retirement, Brooks eagerly told a magazine reporter: "The investigation reports are still available. The pathologist reports are still available. There are lists of suspects." Given a little more time and new technology, he most likely would have cracked that case as well.