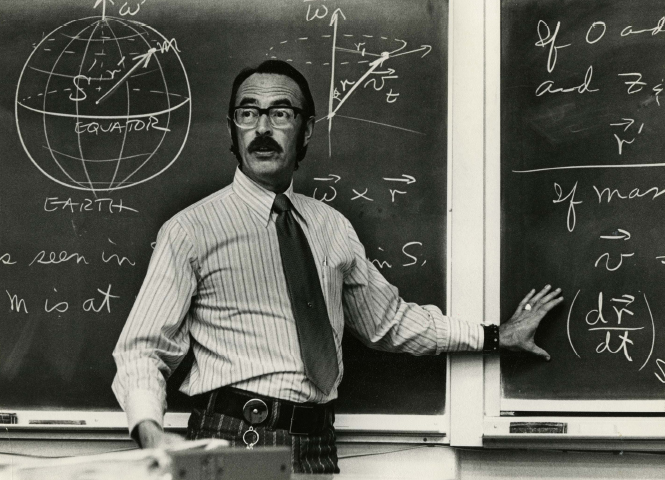 If 15-year-old violinist Alvin Hudson had accepted the Royal Academy of Music scholarship offered to him, generations of Oxy students would have missed out on a favorite physics teacher. But Hudson—emeritus professor of physics who died Aug. 19, 2017, at age 95 in Portland, Ore.—chose the sciences instead. A Portland native, Hudson studied physics at Linfield College until he enlisted in the Army after the United States entered WWII. He used his G.I. Bill benefits to continue his studies at Stanford, earning his bachelor’s, master’s, and doctoral degrees there while working at Los Alamos National Laboratory. He joined the Oxy faculty in 1956. A specialist in high-energy nuclear physics, he happily used the College’s subcritical reactor provided by the Atomic Energy Commission shortly after his arrival. The longtime physics department chair devoted much of his time to the development of curricula for undergraduate physics students, twice while being funded by National Science Foundation grants. He teamed with colleague Rex Nelson to write a well-received introductory two-volume physics text, University Physics, that was translated into Japanese. A member of the American Physics Society, a past president of the Southern California Section of the American Association of Physics Teachers, and a member of Sigma Xi, the professional physics fraternity, Hudson also served as chair of the Advanced Placement Committee for physics for the Educational Testing Service. He retired in 1987 after teaching at Oxy for 31 years. He left no immediate survivors.