Professor Michael Hill has guided scores of grateful chemistry students from his lab into impactful careers. But it’s the thing he hasn’t done that touched off an international media frenzy

Let’s set one thing straight: Fletcher Jones Foundation Professor of Chemistry Michael Hill—gifted though he may be—has not bestowed upon the world the ultimate fast-food nose job.

No matter what you may have read from such U.K. news outlets as the Mirror (“Innovative nose job technique takes just FIVE minutes—and no surgery”) or the Sun (“ELECTRIC NOSE JOB”) about a miraculous rhinal transformation utilizing a process called electromechanical reshaping, it isn’t so.

“No, I never had anything happen like the nose job fiasco before,” Hill says with a laugh, sitting in a windowless office deep within Norris Hall of Chemistry, his academic home for the last 25 years.

Back in April, Hill gave a talk on electromechanical reshaping, or EMR, at a national meeting of the American Chemical Society in Orlando, Fla. “The ACS looks for research that might be interesting to the public just because chemistry has a bad name,” Hill says. “They asked me, ‘Do you mind if we do a little press release?’ I said sure. And then I started getting calls from media outlets.”

BBC News was the first to bite. “I did an interview, but I never mentioned the words ‘nose job,’ ” Hill explains. “And this couldn’t be used for a nose job. A nose has a bone in it. There are a lot of potential applications for this, but a nose job isn’t one of them.”

Scientific accuracy notwithstanding, the Mirror and Sun quickly rehashed the story, and a host of other news outlets followed suit, including the New York Post (“New nose job procedure uses electricity instead of surgery”). Only a few websites took a more buttoned-down approach, such as Medgadget.com (“Surgical Electricity Used to Molecularly Reshape Tissues”).

In the most basic explanation of the procedure, small needles are inserted into the cartilage, electrical current is passed through, and the cartilage is reformed to the desired shape. The process is the brainchild of Brian Wong, a specialist in facial plastic and reconstructive surgery at UC Irvine, who had been working on a less invasive procedure for cartilage-based surgeries, such as those to rectify nasal-tip deformities, deviated septums, and even protruding ears.

“The tissue inherently wants to be in one configuration,” Hill says. “So, you mechanically change it. You insert these electrodes, and you neutralize all of that charge. Now it’s not under strain anymore. You hold it in place, you re-equilibrate the PH, now it’s locked into this new confirmation. That’s the way this thing works.”

Hill, an electrochemist, was brought on board to provide a molecular perspective and discover why things were happening the way they were happening, leading to predictable results with minimal tissue damage. After six years of research, his trial runs have been successful in reforming the ear of a living rabbit, and—having had cataract surgery to correct his own “massive” astigmatism—he is excited about its potential for repairing corneas and improving eyesight. Amazing stuff, but a far cry from human schnozz beautification.

But it’s easy to see why the dangling carrot of such a breakthrough would quicken the pulse of cosmetic surgery enthusiasts. Rhinoplasty is the third most common operation in America, with almost 219,000 procedures annually as of 2017. To this day, Hill says, “I’ll get emails from people asking, ‘Can I schedule a nose job?’ ”

Hill’s trek to Occidental began with laying sod in Detroit. Growing up in economically ravaged Motor City in the 1970s and ’80s, he expected to eventually become a tool-and-die maker like his father. “I wasn’t the kid that played with chemistry sets or anything. I was a groundskeeper for a hospital,” he says of his early teenage gig. “We’d lay sod down and then people would come at night and steal it. We probably bought the same sod the next day and put it back.”

Fast forward to September 1986. Hill was at Macalester College in Saint Paul, Minn., studying history and considering law when fate intervened in the form of Antonin Scalia.

The inaugural DeWitt Wallace Conference on the Liberal Arts brought a handful of national scholars to campus, including a novelist, a chemist, a social psychologist, retiring Chief Justice Warren Burger, and Scalia, who was one week away from being confirmed by the Senate to the U.S. Supreme Court.

“I was excited to hear his ideas, to see how he analyzed and thought through complicated problems,” Hill recalls. “Instead, he was completely disinterested and dogmatic—facts exist to be manipulated to fit your worldview, not the other way round. I just looked at my friend and I said, ‘Let’s go see what the chemist has to say.’ ”

Harry Gray turned out to be “everything Scalia wasn’t—curious, imaginative, open to new ideas,” Hill continues. “He said that science is not for people who can’t be wrong: By definition you continually reevaluate, refine, and evolve your ideas. When you are completely wrong is when it gets really interesting.”

Since 1966, Gray has been the Arnold O. Beckman Professor of Chemistry at California Institute of Technology. A pioneer in his field, he holds an honorary degree from Oxy presented at Convocation in August 2012. (In addressing the Class of 2016, Gray called Oxy the “best college on this planet. I’ve interacted with Oxy over many years, and your faculty are a tremendous group to work with.”)

Hill’s relationship with Gray began when Hill attended grad school at the University of Minnesota, studying with one of Gray’s former students. “After Mike got his Ph.D., he came to Caltech to do his postdoc with me,” says Gray. “I got to know him really well because we collaborated. After that he joined Occidental’s chemistry faculty, where he’s had a tremendous influence and been such a leader.” 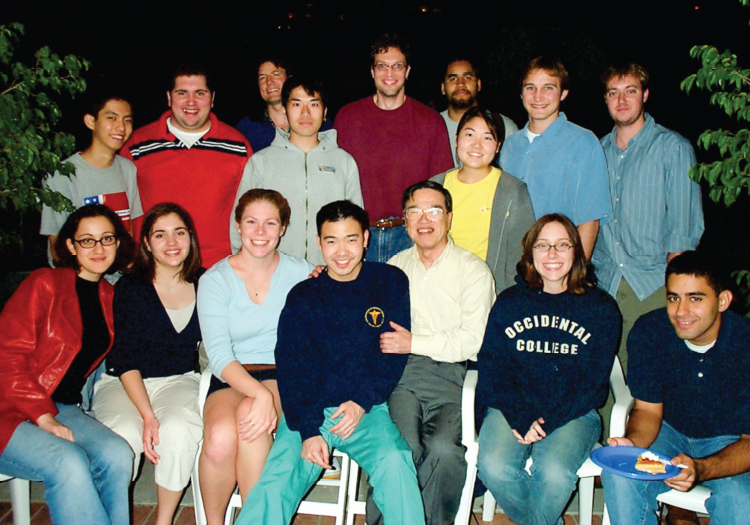 Attracted by Occidental’s emphasis on research as well as teaching, Hill arrived at the College as an assistant professor in 1994. He has published regularly and guided a multitude of grateful students from his lab into impactful careers. Of 104 Oxy students who have worked directly with Hill, he says, 54 have gone on to Ph.D. programs, 26 to medical school, four to M.D./Ph.D. programs, and six have become teachers.

“He’s known far and wide as a major figure in training undergraduate research students,” Gray observes. “He has a gift as a teacher, he’s like the Pied Piper. I don’t know exactly what his secret is, but he certainly has a way with students that’s special. He’s just a very interesting guy who makes chemistry very interesting.”

One clue to understanding that unique gift might be Hill’s penchant for blowing up Gumby dolls, which he’s been doing since 1994. “He discovered that if you put a little plastic Gumby figurine in liquid nitrogen and freeze it and then let it warm back up, it’ll explode. And when they explode, they make this screaming noise,” explains Bryan Hunter with great glee. He’s a Rowland Fellow at Harvard who graduated from Yale University in 2008 and earned his Ph.D. at Caltech working under Gray.

Hunter, who grew up in North Hollywood, also began working in Hill’s Oxy lab when he was in high school at Oakwood School. “Luckily he took a chance on me,” says Hunter, who taught organic chemistry at Oxy in 2010 and 2011, and inorganic chemistry in 2017. He’s been collaborating with Hill on published works for over a decade. “I learned basically everything that I needed to know for grad school in his lab. It’s pretty remarkable because I went to Yale as an undergrad, but every summer, instead of doing research at Yale, I came back to Oxy.”

That pattern continued when Hunter moved on to Caltech. “I don’t trust anybody experimentally as much as I trust Mike,” Hunter says. “A lot of the key experiments for my Ph.D. were actually done in the chemistry building at Oxy and not at Caltech. I can’t underscore enough how good my training with Mike was. When I went into graduate school, people were shocked that I knew how to do certain things. It was just because I’d worked with him at Oxy.”

And there’s the Gumby procedure. “A couple times I brought in classes that I was teaching at Oxy and I was like, ‘Oh, Mike, you gotta do the Gumby thing for them!’ And so he would always do the Gumby explosion, which was a huge hit.”

“He loves freezing Gumbys, that’s so true!” says Rebeca Fernández ’16. “He’s also the most gifted lecturer I’ve ever taken a class from. He somehow tells a story in a chemistry course, which is pretty incredible because all you’re doing is throwing molecules together and then studying what happens. But by explaining the most fundamental concepts that are based in a lot of math, he just shows you this entire world that you didn’t know existed.”

Fernández is currently in grad school at University of Wisconsin studying inorganic chemistry. “Most of the research that I’ve seen done here is on par with what Mike accomplishes in an undergrad institution, which is pretty incredible,” she says. 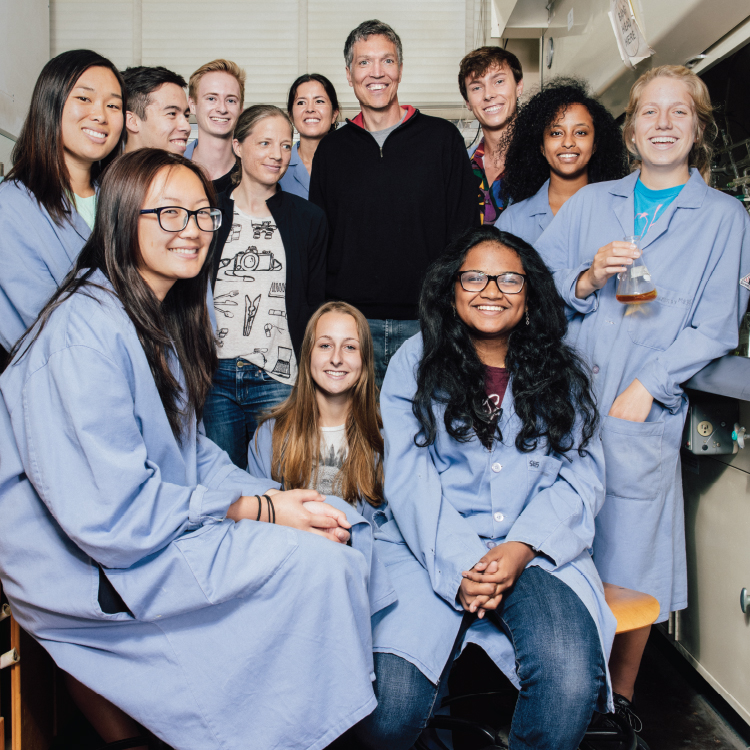 Like many of her peers, Fernández came to regard Hill as a personal mentor as well. “One of the most important things that he told me before going to graduate school is, ‘You can do it.’ Graduate school is very, very hard, and I go back to that moment so often,” she says.

“The greatest gift that he gave me was the concept of independent thought and the ability to generate unique ideas,” says Azam Ahmed ’99, assistant professor of neurosurgery and radiology at the University of Wisconsin School of Medicine and Public Health. “I was really fortunate to land upon Oxy and, more importantly, have him as a research mentor who encouraged that kind of thinking.”

Azam attributes his current position to Hill’s influence. “I think when people choose their profession, either they have this inherent desire to do that thing or are heavily influenced by their parents. But for a lot of people they identify with a certain mentor and say, ‘OK, I want to be like that guy, and I can see my life being like that.’ That’s how it was for me with Mike.”

Hill has held his current appointment as chair of the Chemistry Department since 2014. It’s his second term; he previously served from 2002 to 2005. In recent years, three tenure-track hires have fleshed out the roster of seven regular faculty: assistant professors Jeff Cannon ’07 and Raul Navarro, hired in 2014 and 2017, respectively, and associate professor Emmanuelle Despagnet-Ayoub, who started at Oxy last fall.

“Jeff’s about to get tenure—he’s great,” Hill says. “He’s got an army of undergrads. Raul is brilliant and very elegant. He’s going to be fantastic. Emmanuelle was a professor in France and a staff scientist at Caltech, and she’s off the charts.”

Hill abides by a principle handed down from Carl F. Braun Professor of Chemistry Emeritus Donald Deardorff, who retired in 2015: “When you’re looking for new colleagues, you know that you’re successful if by the time you retire, you’re the worst one here,” he says. “You always look for people who are better than you. And we’ve always held that line.”

Over the course of two hours spent talking to Hill, his students come in and out of his office—dropping off experimental data, chatting about a cornea repair device that cradles a human eyeball, or searching for a misplaced coffee. It’s a warm and comfortable atmosphere. Everyone calls him Mike.

“The one thing that I want to emphasize is how much fun I have had with my group over the years, and how proud I am of them,” he says. “My students have always been incredibly warm and welcoming to everyone coming into the group. They work extremely hard year-round, and have gone on to do great things.”

Who knows? Maybe one of them will someday perfect the science of the 5-minute nose job. (Just don’t hold your breath.)