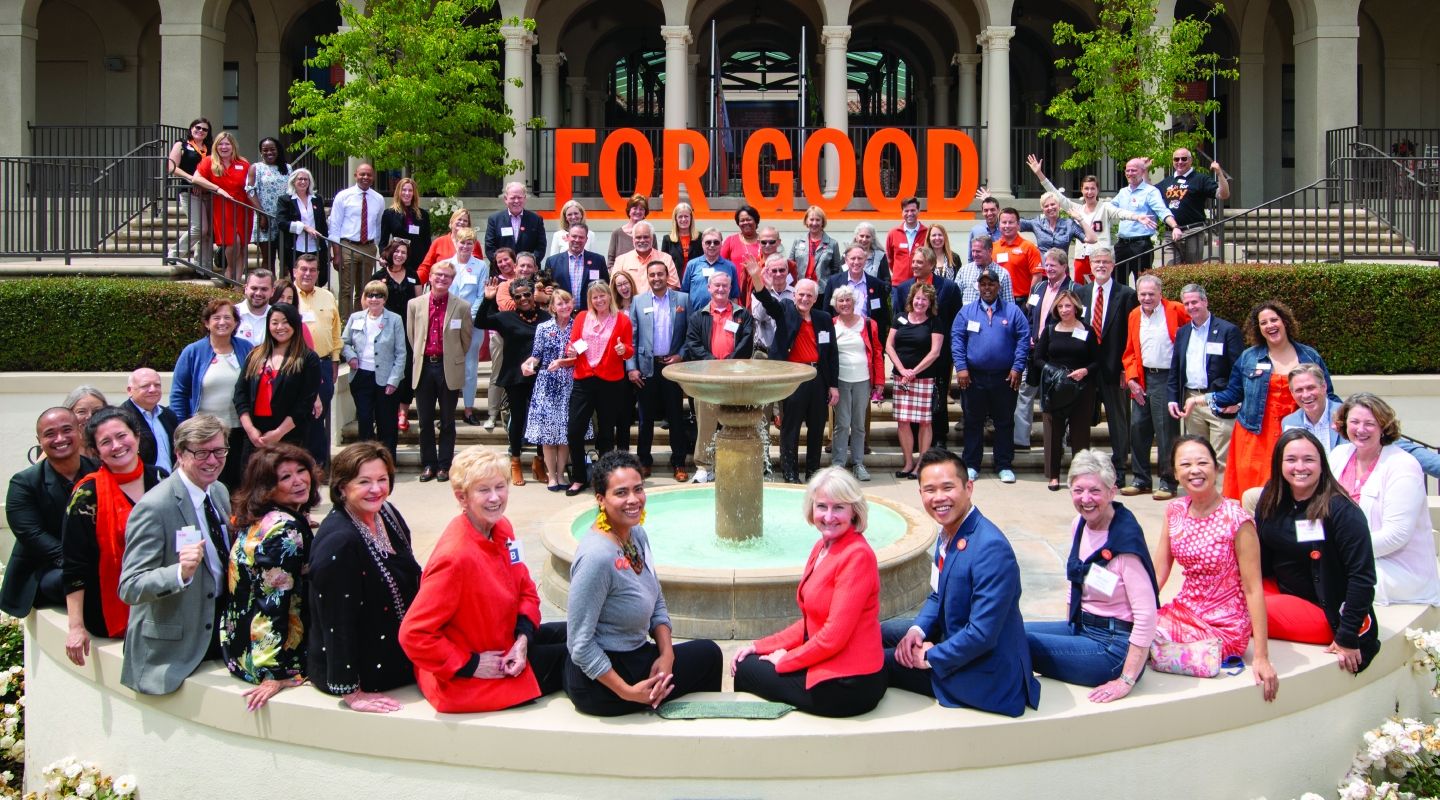 For the Good of Occidental 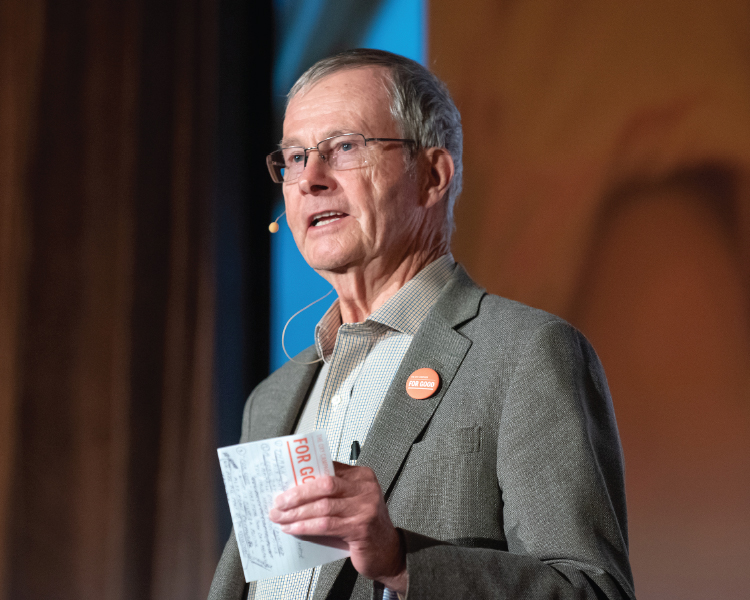 The Oxy Campaign For Good—which you’ll be hearing a lot about over the next few years—can be interpreted a number of ways. “ ‘For Good’ can mean what is right, what is appropriate, what should be,” said trustee Dave Anderson ’63, who provided the lead gift for the Anderson Center for Environmental Sciences currently under construction. “But ‘For Good’ also means permanent—for good. This campaign is a major step forward into making Oxy a sustainable institution for the future. And it’s critically important that we all come together and make that happen.”

Anderson’s remarks capped the daylong Campaign Leadership Summit at Occidental on May 18—a day that began with a session on storytelling led by communications expert Andy Goodman in which participants were asked to tell their own Oxy story in a two-minute narrative. An Oxy education “changes your life—it certainly changed mine,” said Anderson, who enrolled at Occidental two months after his mother died following a long battle with cancer. “She had been incredibly strong in her belief in wanting to continue to live. And she essentially lived until I graduated from high school. And so I arrived on the Oxy campus, very lost and very much not knowing where I was going or what I was going to encounter here. Would this be a positive experience? Would I even last?

“And I remember one of my first courses was an English literature writing course—one of those 101-required courses that Oxy had in those days. And we had our first writing requirement a month or two into the class.”

When Anderson got his paper back, “it had a C-minus. … What do you do with a C-minus?” He started talking to his professor, who became one of his mentors at the College, “and I later found out that he gave everyone a C-minus on that exam. That was his introduction to Oxy.” 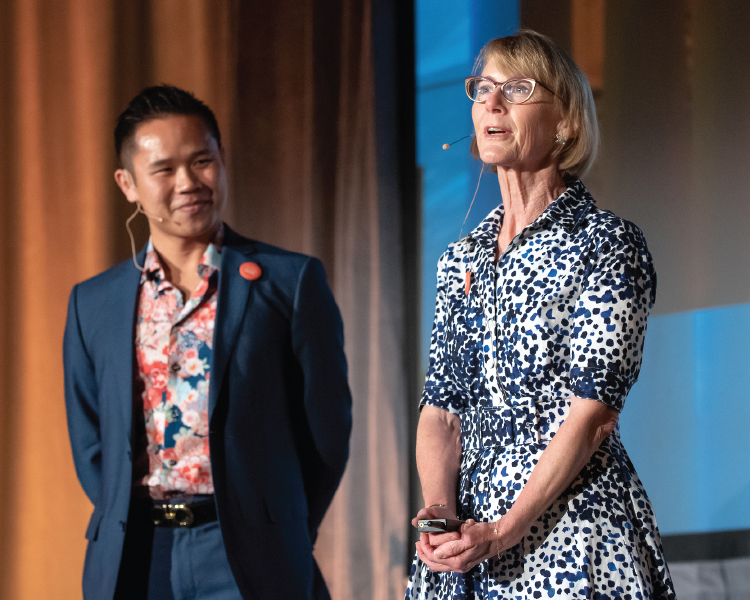 Other speakers at the launch of the public phase of the campaign included trustee Maureen Halperin, mother of Sara Ruth Halperin ’16. She recalled how her daughter, a critical theory and social justice major, landed multiple internships in the music industry—most notably a yearlong internship with Ian Montone ’89 at his management company, Monotone. “Occidental supported my daughter to translate her education into real-world work experience. The Hameetman Career Center is essential to students like Sara Ruth precisely because it helps provide those connections and resources.”

Halperin added that her family makes Occidental a philanthropic priority “so other students can access opportunities similar to those of my daughter and to many of you—opportunities that Oxy graduates can in turn carry forward as they go out into the world and flourish.”

She was joined on stage by Occidental Board of Governors President-elect Tuan Ngo ’07, who was born in Vietnam “to parents who had at most an elementary school education and they had parents who were farmers. Growing up in America,” he told the gathering, “I held tight to our collective dream that education will lift us from despair and put us on a path to a better life.

“Obtaining a prestigious liberal arts education for those without means is often an illusory dream, because the cost of providing a quality education put it out of reach for many families like mine,” added Ngo, who majored in diplomacy and world affairs. “Oxy believed in me and invested in my future.” 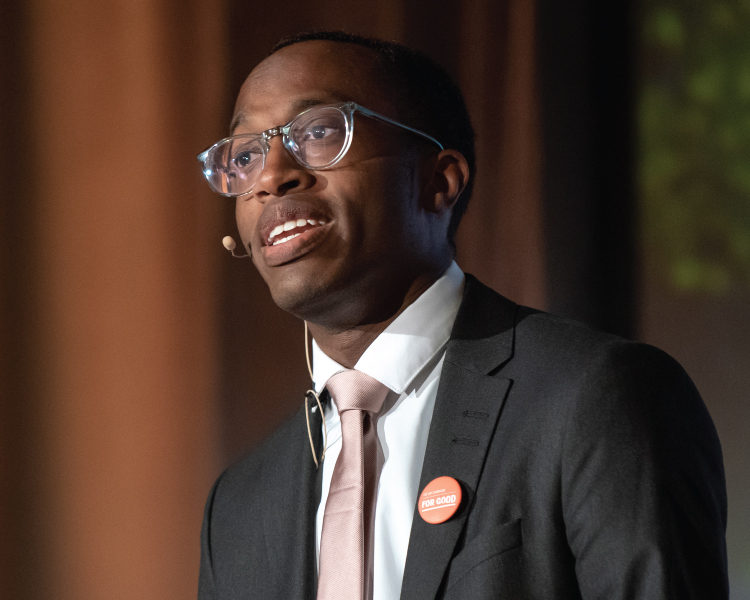 “Though Oxy has many idiosyncrasies, I think our most unique is the culture of care, our tendency to reach out,” said Jordan Walker ’21, an economics major from Jamaica, N.Y. “I know that someone on campus always has my back … from Jenny in the Marketplace telling me to eat, to Georgina in Facilities, who always gives the warmest smile every morning before class.”

To be an Oxy student “is to be capable of amazing things like undergraduate research, studying abroad, and investment management,” added Walker, who is currently president of the Blyth Fund as well as ASOC vice president of finance. “It drives Oxy’s uniqueness amongst other liberal arts schools and pushes me to take advantage of all that Oxy has to offer.”

In his remarks, President Jonathan Veitch called upward mobility “nothing less than the promise of the American Dream. It is the invitation our country holds out to its most talented young people, no matter what their circumstances —an invitation that says to them that you will have the opportunity to go as far as your talents will take you. Upward mobility is the glue of our democracy and the guarantor of our freedom.” He concluded: “I believe in the power and value of a liberal arts education to change lives. I believe in this community, in this institution, your alma mater. That’s why this campaign is so important. I think it’s worth investing in, don’t you? Thank you for your commitment to helping move Occidental forward—for good.”