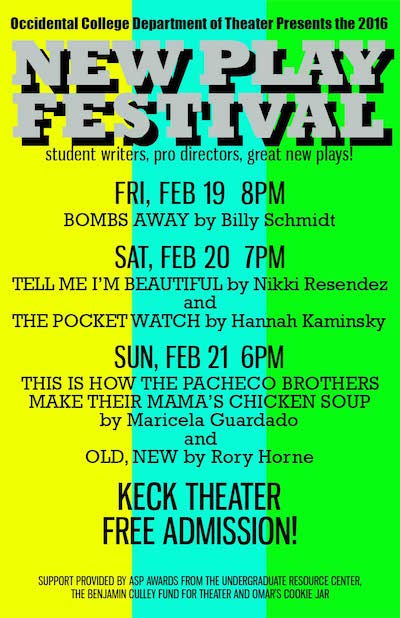 The festival begins with the selection of five plays from student submissions. The student actors are then chosen from a campus-wide audition, bringing together theater and non-theater majors alike. From there, a guest director and up to three professional actors are brought in to work alongside student actors. Over the course of next several months, the student actors, writers, producers, designers, and technicians have the opportunity to meet and collaborate with local theater professionals to bring the plays to life.

"Students [while participating in the New Play Festival] slowly but surely become more skilled, insightful, expressive and collaborative," says Meade. "We manage, if I may say so, to create a fertile atmosphere for our student writers and their student and professional fellow artists to really shine."

Many festival alumni have gone on to excel not only in the theater community, but also in the fields of television, online media, creative writing, and film. Writer and producer Angela Kang ’99 has worked on popular television shows, such as The Walking Dead, Grey’s Anatomy, and Terriers. Will Watkins ’02, co-founder of the online media company Maker Productions, recently finished starring in a two-year international tour of DreamWorks’ arena spectacular How to Train Your Dragon. Previous festival writer Claudia Restrepo ’10, in collaboration with several other theater alumni, rebooted her festival play Reconstruction for the 2012 Hollywood Fringe Festival. Actress and writer Nina Carlin '15 has written, produced, and performed in her own plays for the Hollywood Fringe Festival on multiple occasions.

Financial support for the festival is provided in part by Academic Student Project Awards from Occidental College, the Benjamin Culley Fund for Theater, and Omar's Cookie Jar.