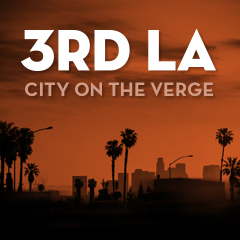 Now in its third year, the series led by Christopher Hawthorne, architecture critic for the Los Angeles Times and professor of practice at Occidental, explores a city that stands on the brink of a post-suburban era in which debates over housing, open space, density, development and mobility will increasingly dominate the civic conversation.

The series, staged in venues across the city as well as at Occidental, has provided a unique forum to address the pent-up demand for a thoughtful and timely discussion of where Los Angeles is today, where it’s going, and how we might get there. Students enrolled in Hawthorne’s urban and environmental policy class play a variety of roles in the series, from helping plan and structure the discussions to onstage roles introducing or interviewing panelists.

This year’s four events tackle some the region’s most consequential and hotly debated political questions head-on. Each begins at 7:30 p.m. and is free and open to the public with advance registration at oxy.edu/ThirdLA.

The series begins March 1 with The Politics of Housing: Measure S and the Future of Growth in Los Angeles at the Architecture and Design Museum in downtown L.A.’s Arts District. Featuring former Los Angeles planning director Gail Goldberg; Prof. Manuel Pastor, inaugural holder of the Turpanjian Chair in Civil Society and Social Change at USC; and CityWatch contributor Ken Alpern, among other speakers, the panelists will consider what gave rise to the controversial measure and what its approval or rejection by voters March 7 will mean for development and the production of new housing.

The centerpiece of this year’s series follows at Occidental on March 22: City on the Verge: Eric Garcetti and Christopher Hawthorne in Conversation. Garcetti, up for re-election to his second term on March 7, is a former adjunct assistant professor of diplomacy and world affairs at Occidental. Garcetti and Hawthorne will cover topics including the re-imagining of the Los Angeles River; the expansion of the region’s transit network under newly approved Measure M; debates over growth and real-estate development; and L.A.’s relationship with Washington, D.C. and the Trump administration.

The series returns to Occidental March 29 with Youth Movement: Mayors Aja Brown and Robert Garcia, featuring Brown, mayor of Compton since 2013, and Garcia, mayor of Long Beach since 2014. As two of the youngest (Brown is 34, Garcia 39) mayors in Southern California, they represent a new generation of political leadership in the region. They’ll discuss their own paths to election, the state of their cities and the opportunities and challenges of piloting cities in the shadow of giant Los Angeles.

The April 19 series finale also will be held at Occidental. 96 Acres: Designs on the Silver Lake Reservoir will consider one of the most contentious public-space issues in contemporary Los Angeles: the future of the Silver Lake Reservoir. Now that the reservoir will no longer be a source of public drinking water, what’s the best way to use its 96 acres? Panelists including Mia Lehrer, founder of Mia Lehrer + Associates landscape firm and Silver Lake resident and Alexander Robinson, assistant professor in USC’s Landscape Architecture Program and principal of the Office of Outdoor Research will provide a range of fresh perspectives.

In nearly a dozen events over its first two years, 3rd LA has examined topics including the future of the Los Angeles River, the controversial redesign of the Los Angeles County Museum of Art and the city’s homelessness crisis. It has featured high-profile guest speakers from the worlds of academia, architecture, planning and policy.