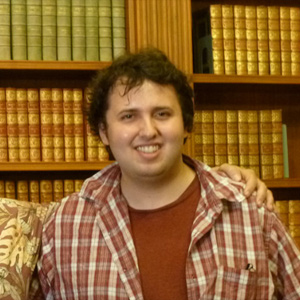 The media arts & culture and political science double major from Rogue River, Ore., an editor at Bunim/Murray Productions, was nominated in the category of Outstanding Picture Editing for an Unstructured Reality Program for his work on the A&E Network show Born This Way, which follows the lives of seven adults born with Down syndrome. Rambach was among a team of nine editors nominated for two episodes of the series.

While a student at Occidental, Rambach secured a competitive postproduction internship position at Bunim/Murray, which turned into postgraduate employment. He was promoted to assistant editor and then editor in the space of two years—"a timespan very rare for the entertainment industry but characteristic of the excellence and drive for which the MAC faculty and Ryan's peers remember him," said Brody Fox, associate professor and chair of the media arts and culture department, who added, "Tune in with the Oxy community on September 17 to watch the Emmys on CBS!"

Other Oxy Emmy winners include four-time nominee Peter Scolari ’77, best known for his roles in "Bosom Buddies" and "Newhart," who won the Emmy for Best Comedy Series Guest Actor last year. President Barack Obama ’83 won Best Spoken Word Grammys in 2006 and 2008 for the audiobook versions of Dreams from My Father and The Audacity of Hope.