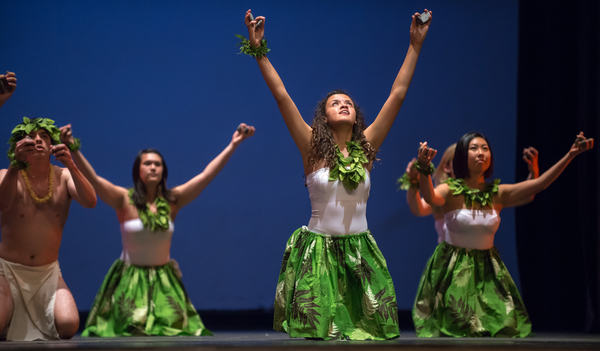 Dance Production, one of Occidental College’s oldest and most popular student-run clubs, returns to the Thorne Hall stage for its 68th annual show March 18-19.

This year’s performance features 24 choreographers working in styles ranging from flamenco and ballet to hula kahiko and hip-hop. The 2016 choreographers include a good number of Dance Pro veterans, including Leah Nomkin ’16, a Spanish and English double major from Phoenix, Arizona, and Melody Dahlgren ’16, a politics major from Santa Cruz, both of whom are serving as choreographers for the fourth straight year.

"After that first year starting not just as a dancer but as a choreographer as well, I was already so deep into Dance Pro, and I just wanted to get more involved," Dahlgren said. "[Dance Production] is the main part of my life here outside of academics."

In addition to being choreographers for all four years of their Oxy careers, Nomkin and Dahlgren have also been on the Dance Production executive board for three years, the maximum amount of time one can serve on the E-Board.

"They can’t get rid of us," Nomkin said with a laugh.

Since its start in 1948, Dance Production has given the opportunity to dance to anyone who is willing to learn. Many have little or no dancing experience. Over the course of five months, student choreographers hold weekly, 90-minute rehearsals, sometimes teaching up to 80 students at a time.

"I think Dance Pro’s inclusiveness really draws me in -- the fact that anyone can participate who wants to participate in it, and I’m all about that, "Nomkin said. "I think that’s what should be dance. Dance shouldn’t be an exclusive thing; it shouldn’t be limited to people that only have a certain skill level."

Many first-time choreographers are making their appearance this year, bringing fresh talent to the stage. Long-time Dance Pro participants Hilary Fitzsimmons ’16, a psychology major from New Canaan, Conn., and Patrick Walsh ’16, an AHVA major from Northborough, Mass., are first-time choreographers presenting a smooth hip-hop and a percussive hip-hop piece, respectively.

"Just have fun!" Nomkin said with a smile. "That’s what Dance Pro’s about: fun and community."