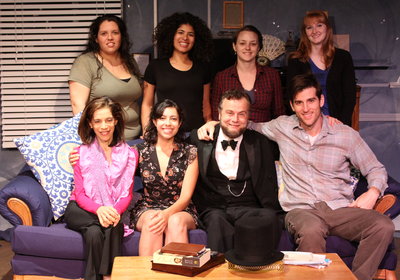 Four recent Oxy grads have produced, written, acted in and directed a play that is now being performed as part of the Hollywood Fringe Festival. In addition, Reconstruction was just selected as a "Critics Pick" by Backstage West.

Kaja Martin ’08 directed and co-produced; Claudia Gomez Restrepo ’10 wrote, co-produced, and performs the lead role; Courtney Dosenberry ’09 did the scenic design and co-produced; and Alyssa Escalante ’10 is head producer. The play combines the legend of Abraham Lincoln with the story of Sylvia, a young woman who comes to terms with her father’s death through the help of her best friend, the Civil War-era president.

"Who knew Lincoln was such a cool dude? In her quirky new comedy, playwright Claudia Restrepo uses a smart blend of heart and history to look at how we heal, and hide, from life’s tragedies," Backstage West critic Jennie Webb wrote. "Director Kaja Martin does a great job of guiding the terrific cast along the tightrope of the surreal; her shrewd staging steers clear of dangerous pitfalls."

Restrepo wrote the play in 2009 while a student at Occidental. It was then selected for the 2010 Occidental College New Play Festival, where it received a staged reading with professional actors.

The Fringe Festival is "an annual celebration of emerging artists in Los Angeles."