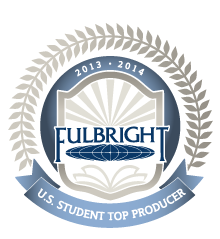 For the eighth consecutive year, Occidental College is one of the country's top producers of student Fulbright Awards, according to the Chronicle of Higher Education's annual Fulbright rankings.

Occidental ranks seventh overall among liberal arts colleges, according to the Chronicle rankings, ahead of such colleges as Amherst, Swarthmore, Wellesley, Macalester, and Claremont McKenna.

The record number of Fulbright winners was a highlight of one of Oxy’s most successful years in competing for international and national awards: