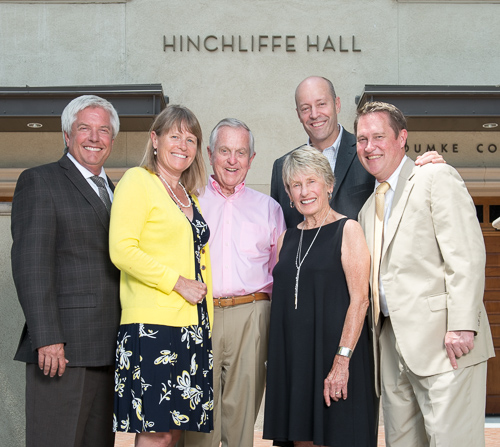 The newest wing of one of Occidental College’s main academic buildings has been named Hinchliffe Hall to honor half a century of service and support from the family of Steve ’55 and Ann (Hoffmann) ’57 Hinchliffe.

Steve Hinchliffe retired this month from the Occidental Board of Trustees after 50 years as a trustee, a record matched only by the Rev. William Stewart Young, one of the College’s founders who also served as a board member for 50 years.

The location of Hinchliffe Hall – a 22,600 square-foot addition to Swan Hall opened in 2012 – at the center of campus "symbolizes its central role at the College, and now the central role the Hinchliffe family has played at Oxy," said President Jonathan Veitch at a June 6 dedication ceremony. "We are all in your debt – deeply in your debt."

"As I look around I see a lot of Oxy alumni who are proud, as we are, that this is our alma mater," Ann Hinchliffe said, speaking on behalf of the family. "We got a good liberal arts education that made us well grounded for our careers … We’ve been fortunate to be able to give back to the College, and I’d like to encourage everyone to think of doing the same."

Trustee John Power ’58 joined Veitch in paying tribute to his longtime friend and colleague. "Steve has a rare combination of qualities one treasures in a trustee," said Power. "He is an articulate advocate with excellent judgment; a sharp inquisitive intelligence, collegiality, and huge relevant external experience; a deep knowledge of the College, its history, and its place in higher education; and an entrepreneurial spirit."

Hinchliffe joined the Alumni Board of Governors in 1965 and was appointed to the Board of Trustees in 1970, where he has served in a variety of roles, including board chair. The Hinchliffes have provided regular financial support for the College for five decades, and today are counted among Oxy’s most generous benefactors. At the family’s request much of that giving, which has focused on student scholarships, has been without fanfare.

The Hinchliffes’ ties to Oxy run deep: Steve’s brother Doug is Class of 1964; Doug’s wife Robin is Class of 1960; Steve’s son John is Class of 1988; and his grandson Ryan Link is a rising junior. Daughter Lisa Link has just joined the Board of Trustees.