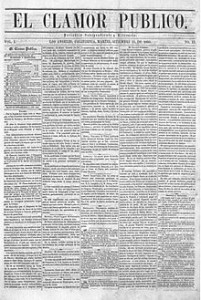 Journalists Jim Newton, Bill Boyarsky and Kevin Roderick – who collectively have more than 80 years of experience as reporters, editors, and columnists at the Los Angeles Times -- will join such distinguished scholars as David Hayes-Bautista (UCLA), Felix Gutierrez (USC) and Merry Ovnick (Cal State Northridge) at the day-long conference at Occidental College.

"Print journalism – in English, in Spanish, and in the hands of courageous African-American editors – has played a profound role in shaping Southern California," says Kenneth Marcus, professor of history at the University of La Verne and HSSC president. "Yet the rise of the Internet has raised fundamental questions about the future of daily journalism. These are issues we will address in what we know will be a lively and illuminating program."

The day’s presentations will include:

To register for the conference, held in Choi Auditorium in Occidental’s Johnson Hall, go to http://hssc2016conference.eventbrite.com. Cost for HSSC members is $40; non-members $50; graduate students with ID $10; and undergraduates with ID free. Lunch is available for an additional $15. Registration will begin at 8:30 a.m.; the program will begin at 9. A reception hosted by Occidental’s Institute for the Study of Los Angeles will follow at 3:45 p.m. For more information, contact the HSSC at hssc@thehssc.org or (323) 222-0546.