Kwame Do '16 Runs Into the Record Book | Occidental College

Kwame Do '16 Runs Into the Record Book 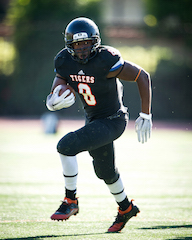 Kwame Do ran his way into the Southern California Intercollegiate Athletic Conference record book in Saturday.

But the Occidental football team didn't have enough juice in a 41-14 loss to Redlands in their season finale at home in Jack Kemp Stadium.

He finished with 130 yards on 29 carries, marking the 13th consecutive game that he's run for at least 100 yards, a streak that extends over two seasons. The senior economics major from San Marino upped his career total and the new record to 4,133 yards. He also reset his Oxy single season rushing record with 1,571 yards during 2015.

The Tigers finished the season in third place at 5-4 overall and 4-3 in SCIAC for the third year in a row.