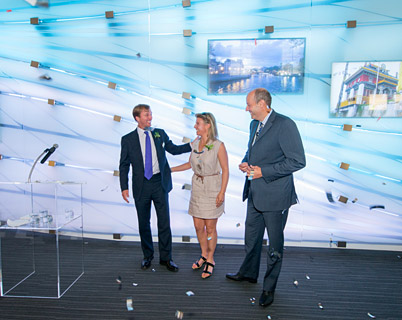 Occidental College dedicated its new McKinnon Center for Global Affairs April 26 with dozens of students demonstrating how global awareness informs their work – many of them using the innovative technology built into the fabric of the building.

The McKinnon Center – architect Hagy Belzberg’s radical re-imagining of the interior of one of the College’s original 100-year-old buildings – "is Occidental’s commitment to global citizenship made visible," said President Jonathan Veitch before hundreds of invited guests. The departments of politics, diplomacy and world affairs, and foreign languages and the International Programs Office are all housed in the new Center.

Hedge fund manager and former Occidental trustee Ian McKinnon ’89, who with wife Sonnet provided the lead gift for the project, emphasized how the need for a global perspective has increased dramatically since his days as a public policy major.

As the president of the Blyth Fund, Oxy’s student-run investment pool, "I think we had one international position in our portfolio," McKinnon said. "In the hedge fund I run now, we generally have had 40 to 50 percent global positions."

While the McKinnons made their gift to honor two of Ian’s professors who had a major impact on him – Derek Shearer and Roger Boesche – he also paid tribute to Veitch. "He is doing an amazing job of leading this institution," McKinnon said. "It was his leadership that inspired us."

McKinnon and Veitch spoke in front of the centerpiece of the $11.5-million, 40,000-square-foot project:  a two-story-high, LED-lit media wall of sculpted glass with 10 embedded interactive screens that displayed a constantly shifting array of student and faculty research and coursework.

"This is an experiment in what’s possible," Veitch said. "This is our answer to massive open online courses – MOOCs – and the threat that technology will supplant a more personalized education. "

The media wall and the corresponding web application that drives it, known as the Global Forum, is the public space for the display for digital reports from Oxy students studying overseas, for classroom projects that extend the discussion beyond the classroom, and "a public space where the excitement of intellectual endeavor – and liberal arts education in general – is made visible to all," Veitch said.

Immediately afterward, the audience moved to Choi Auditorium, where the Choi family was honored for providing the resources to transform what was originally the College chapel into one of the College’s premier venues.

"As the United States pivots toward Asia, Oxy is poised to play a vibrant role educating leaders who will inherit a hot, flat and crowded world," said Lucia Choi-Dalton ’89, the first person in her family to graduate from college. "My family is honored that generations of Oxy students will become more informed global citizens here in Choi Auditorium."

So impressed was the Choi family with Belzberg’s blending of the auditorium’s historical elements with contemporary design that it pledged another major gift to help meet the overall construction costs of the project, Veitch announced.

Former Vermont Gov. Howard Dean delivered the auditorium’s official inaugural lecture, "The First Global Generation and How They Are Changing Everything," in the auditorium as the 2014 Phi Beta Kappa Speaker, underwritten by the Ruenitz Trust Endowment.

After the Dean lecture, dozens of Oxy students from a wide range of disciplines offered demonstrations of the global aspects of their work, from students at the Kahane United Nations and Richter Fellows overseas research programs to biology majors who studied bromeliads in Costa Rica and urban and environmental planning students Skyping from Rio de Janeiro.