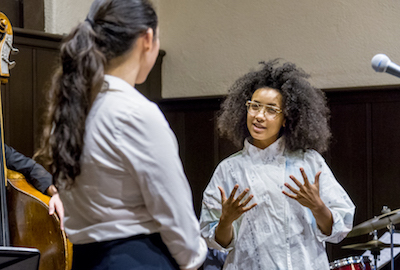 Grammy-winning musician and singer Esperanza Spalding visited Occidental College on February 2 as the 2018 Hume Fellow in the Performing Arts, holding a master class for students and performing a free public concert.

Famous for singing while accompanying herself on the upright and electric bass, she has won four Grammy Awards, including the award for Best New Artist in 2011, the first jazz artist in history to win in this category.

Occidental students Inez Leon ’21, an undeclared major from San Marino, and Cate Selna ’20, a music major from Oakland, were the lucky recipients of Spalding’s coaching at the hour-long master class preceding the concert, with Leon singing a song of her own composition and Selna performing Billie Holiday’s "God Bless the Child."

"We’re storytellers first," Spalding reminded the aspiring singers. "Everyone can sing now. It’s boring. Use the space to transmit to the audience what only you know."

Spalding stressed to the students that they must understand the meaning behind the lyrics they sing and make them relevant to their own experience. "What did these lyrics emerge from? Put it somewhere in your reality," she said. When Selna then sang Holiday’s song a second time, Spalding told her, "This time you were talking to us. Before, you were talking to yourself."

"I feel something different," Selna said.

"I know, we did too," Spalding assured her.

A private reception followed the master class, and then Spalding took the stage in Thorne Hall to perform for a packed audience.

"One of the many hats that Bill Hume wore while at Occidental in the 1950s and ’60s was as the guest lecturer on jazz for the Western civilization course that all students took," said David Kasunic, associate professor of music and music department chair. "I trust he would be thrilled that his generosity made this concert possible. Esperanza Spalding is the consummate musician, an extraordinary communicator and innovator."

Spalding performed for President Barack Obama ’83 at the White House twice, in 2009 and 2015. At 20 years old, she became one of Berklee College of Music's youngest instructors in the school’s history, and this year, now 32, she was appointed a professor of music at Harvard University. Last September, she composed and recorded a limited-release album called Exposure over the course of 77 hours, streaming the entire process live on Facebook. This demanding feat of musicianship was an artistic marathon that yielded a 10-song album while garnering 1.4 million views. Before Exposure ended, all 7,777 copies of the album (priced at $50) had sold out.

Over the past decade of her artistic journey, Spalding has continually married genres, pushed boundaries and created groundbreaking work. As a musician, composer, vocalist and lyricist, Spalding is expansive and progressively innovative. She has released dozens of collaborative as well as six solo albums.

The G. William Hume Fellowship in the Performing Arts was made possible by a generous gift from the G. William Hume Trust. Having earned a master’s degree in music composition from Occidental in 1952, Bill Hume ’50 was an Oxy faculty member who taught music, speech and history. He also served the College as dean of students and director of Thorne Hall.