My Journey Through Madness | Occidental College

My Journey Through Madness 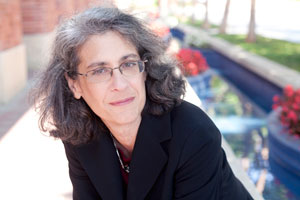 Mental health legal expert and best-selling author Elyn R. Saks will speak on "My Journey Through Madness: The Role of Treatment, Family and Friends, and Work in One Woman’s Recovery" at 4:30 p.m. on Tuesday, April 28 in Swan Hall’s Dumke Commons on the Occidental College campus.

Saks is associate dean and Orrin B. Evans Professor of Law, Psychology, and Psychiatry and the Behavioral Sciences at USC’s Gould Law School. In 2007 Saks came forward with her own story of schizophrenia, controlled by drugs and therapy but ever-present, in her best-selling memoir, The Center Cannot Hold: My Journey Through Madness.

A 2009 recipient of a MacArthur Foundation fellowship, she used the funds from her "genius grant" to create the Saks Institute for Mental Health Law to foster interdisciplinary and collaborative research among scholars and policymakers around issues of mental illness and mental health.

Herself a member of Phi Beta Kappa, Saks is a graduate of Vanderbilt University who earned her master of letters from Oxford University and her law degree from Yale University. She specializes in mental health law, criminal law, and children and the law. Her recent research has focused on ethical dimensions of psychiatric research and forced treatment of the mentally ill.