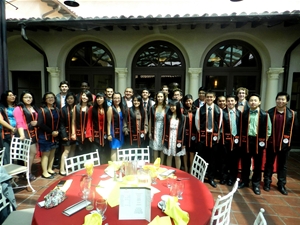 Occidental College's Upward Bound program has been awarded a five-year, $2.74 million grant by the U.S. Department of Education. The federal program helps motivated low-income high school students and students who would be the first in their families to attend college reach their academic potential and complete a postsecondary degree.

In June, all 26 of Occidental's Upward Bound seniors will graduate from high school. This fall, they will attend UCLA, UC Santa Barbara, Cal State Northridge, Glendale Community College, and Occidental, among other colleges and universities.

Oxy's program began in the mid-1960s, and is one of the oldest Upward Bound programs in the country. It serves about 114 local students a year. Since the program's inception, 98 percent of participants have graduated from high school and 73 percent have stayed in college for at least two years. In the last two years, at least 82 percent of Oxy's Upward Bound students have stayed in college a second year.

"The numbers show that Upward Bound works," said Susan Madrid-Simon, director of Occidental's Upward Bound program. "We are working hard to do our part in meeting President Obama's goal of having the highest proportion of college graduates in the world by 2020."

All of Oxy's Upward Bound participants would be the first in their families to attend college, and almost 90 percent are both first-generation and low-income. Their socioeconomic status reflects the student populations of their Los Angeles-area high schools: Franklin, Lincoln, Wilson and Belmont.
Oxy Upward Bound is a year-round program that provides academic instruction on Saturdays during the school year. In the summer, participants live for five weeks on the Occidental campus and take rigorous courses in mathematics, English, science, social science, and foreign language. The courses are taught by certified teachers-some of them former Upward Bound participants themselves.

The Upward Bound program began as part of President Lyndon B. Johnson's "war on poverty," and is one of several related programs created by the Educational Opportunity Act of 1964.