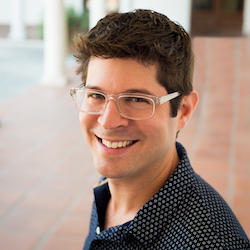 "It has always been a dream to receive a Grammy nomination," Schoenberg said. "And now that it has happened, I feel incredibly honored and humbled. This could not have been possible without the support of Music Director Michael Stern and the Kansas City Symphony. It took 2½  years for the album to be released, and I'm extremely proud of what we accomplished."

Recently named one of the Top 10 most performed living classical composers by orchestras in the United States, Schoenberg’s music has been called "invigorating" (Los Angeles Times) and full of "mystery and sensuality" (New York Times). His works have received performances and premieres at the Library of Congress, Kennedy Center, New York Philharmonic, the Cleveland Orchestra, Dallas Symphony Orchestra and Hollywood Bowl.

"Adam's colleagues and students are thrilled at these most deserving nominations," said David Kasunic, associate professor of music and department chair. "They go far to advance and publicize our shared aspiration to make our department among the best in the country for the undergraduate study of music. What makes Adam such a valued colleague is not just his composing talent, but his tireless dedication to his students."

Schoenberg has received commissions from several major American orchestras, including the Atlanta Symphony Orchestra (Up! and La Luna Azul), the Kansas City Symphony (American Symphony and Picture Studies), and the Los Angeles Philharmonic and Aspen Music Festival and School (Bounce).

Recent and upcoming collaborations include the Phoenix Symphony, Los Angeles Chamber Orchestra, Fort Worth Symphony Orchestra, Boise Philharmonic, Iris Orchestra, Charleston Symphony, Amarillo Symphony, Knoxville Symphony, Arkansas Symphony and the Nu Deco Ensemble. Recordings include Schoenberg’s orchestral works featuring the Kansas City Symphony, an arrangement of When You Wish Upon a Star for Anne Akiko Meyers and the London Symphony Orchestra, and a compendium including his keyboard works by pianist Nadia Shpachenko. Future recordings include his chamber music featuring the Blakemore Trio, and his Symphony No. 2 "Migration" with the University of Texas Wind Ensemble.

Schoenberg has been composer-in-residence with the Fort Worth Symphony (2015-17), Lexington Philharmonic (2013-14), Kansas City Symphony (2012-13), Blair School of Music at Vanderbilt University (2012) and the Aspen Music Festival & School’s M.O.R.E Music Program (2010-13). He won several awards, including ASCAP’s Morton Gould Young Composer Award for his orchestra work Finding Rothko, the Palmer-Dixon Prize from the Juilliard School and the Brian M. Israel Prize from the Society for New Music.

Schoenberg also has scored two feature-length films and several shorts. Highlights include Graceland, co-written with his father, Steven Schoenberg, which premiered at the 2012 Tribeca Film Festival and received its nationwide theatrical release in spring 2013.

A graduate of Oberlin Conservatory of Music, Schoenberg earned his master’s and doctor of musical arts degrees from The Juilliard School. At Occidental, he runs the composition and film-scoring programs.