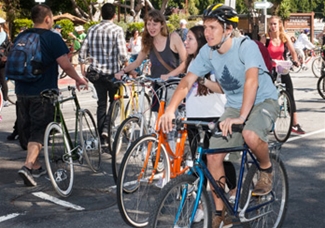 Dozens of Occidental College students, faculty, administrators and staff bicycled, walked, and Metro'ed to CicLAvia on April 15, an Oxy-sponsored event that closed 10 miles of Los Angeles city streets to motorists.

The Oxy cyclists wheeled to the downtown event on streets with and without bike lanes and along the Los Angeles River, which was full of wildlife after a recent rain. The Oxy participants joined more than 100,000 other Angelenos on a car-free route that ran through Boyle Heights, Little Tokyo and East Hollywood.

CicLAvia was sponsored in part by Occidental--the only college or university to do so. Oxy also helped bring the event to Los Angeles.

"We sponsored a bike summit in 2009 and a street summit in 2010 where advocates from around the city came together, and where plans to create L.A.'s very own CicLAvia were hatched," said Jorge Gonzalez, dean of the College and vice president of academic affairs. He spoke at a press conference with Los Angeles Mayor Antonio Villaraigosa that kicked off the event.

At the event, the mayor announced that he gave the green light for a $16-million bike-share program that will put 4,000 rental bicycles at 400 kiosks throughout the city. Green minds think alike: The College established its own bike-share program two years ago for Oxy students, faculty and staff.

In fact, Occidental has long pushed for greener transportation. In 2003, the College helped organize Arroyofest, an event that closed down the historic Arroyo Seco Freeway to cars and opened them to 3,000 bicyclists and walkers. Oxy also supports local revitalization projects such as Eagle Rock's "Take Back the Boulevard."

Sunday's CicLAvia (a play on ciclovia, Spanish for "bike path") was the fourth such bicycle- and pedestrian-friendly event in the city since 2010. The concept began three decades ago in Bogota, Colombia, which closes some of its streets every Sunday for cyclists and pedestrians.