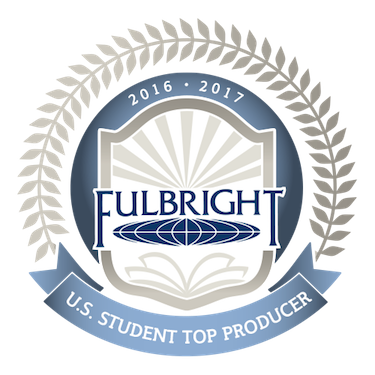 For the eleventh consecutive year, Occidental College is one of the country's top producers of student Fulbright Awards, according to the Chronicle of Higher Education's annual Fulbright rankings.

Occidental ranked tenth overall among liberal arts colleges, tied with Carleton, ahead of such colleges as Wellesley, Grinnell, Wesleyan, Davidson, and Williams, according to the Chronicle rankings.

"Oxy has a real institutional commitment to support our fellowship applicants and a broad network of support on campus that includes faculty, the Writing Center, and the International Programs Office as well as my office," says Kim Babon, director of national and international fellowships.

"I start working one-on-one with candidates early in the process to identify which opportunities best fit their goals and skill sets," Babon says. "That leaves them ample time to draw on our network of support. And they all benefit from the great preparation their Oxy education gives them."

The Fulbright program, which covers travel, education and living expenses, was established in 1946 under legislation introduced by Sen. J. William Fulbright of Arkansas. The program operates in more than 155 countries worldwide.