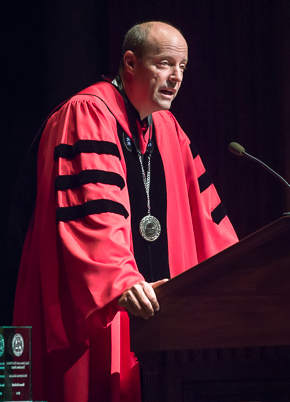 A total of 547 members of the Class of 2018 trooped into Thorne Hall to the thump of taiko drums August 27 for Occidental’s 128th Convocation ceremony, a tradition that formally marks the start of the academic year and welcomes the new class.

This year’s speaker was College President Jonathan Veitch, who tackled a thorny subject: required coursework. Veitch traced the demise of Western Civ/the "Core" at colleges nationwide (including Oxy) over the last three decades to the dueling philosophies of Robert Hutchins (the "great books" program) and John Dewey (first ask what problems or questions we are trying to solve, then identify the relevant books).

Occidental’s current approach, Veitch revealed, most closely matches Dewey’s ideology. It takes "citizenship seriously," and uses the city of Los Angeles as "our laboratory." "On our doorstep, the world’s problems and opportunities are being played out on a daily basis," he said. "You will be asked to engage those problems by shuttling back and forth from the classroom to the field and back again, armed with an understanding of the social, political, cultural and historical issues that frame the issues you are looking at.

"You may find them confirmed in that literature or you may find that your experience in the field challenges the received wisdom in your reading," he continued. "Either way, it promises to be a very rich experience and one that will serve you well, whatever pathway or profession you choose to pursue." 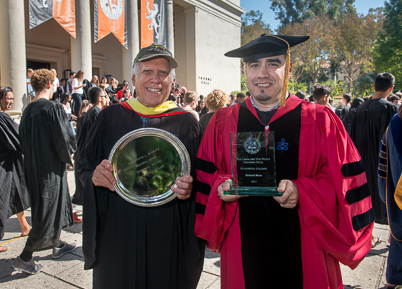 Established in 1972 in memory of former College trustee Graham Sterling, the Sterling Award is presented each year to a professor with a distinguished record of teaching, service and professional achievement. The White Teaching Prize is awarded to faculty members nominated by students for engaging teaching methods and effective intellectual or scholarly mentorship. The prize is made possible by a generous gift from trustee emeritus Tod White ’59 and his wife Linda White.

Gottlieb, who has taught at Oxy for 17 years, is the author and co-author of 12 books, including Reinventing Los Angeles: Nature and Community in the Global City (MIT Press, 2007).  He has written for numerous other publications, including newspapers, magazines, academic journals and online blogs, and has been directly engaged in policy, program development and community action projects in such areas as food systems, transportation and land use, the urban environment, resource policy and work and industry. He is executive director of the Los Angeles Food Policy Council and previously served as chair of the Los Angeles Food Policy Task Force.

In nomination letters, Goffredi’s students spoke of her mentorship, "presence," "intelligence," "high standards" and "command." "She made every effort to contribute her thoughts and expertise while never daring to quash an opportunity for me to experience and learn on my own," said one student, who did fieldwork with Goffredi in Costa Rica.

Mora’s students called him "engaging," "supportive," "stimulating" and "challenging." "He made large classes feel intimate and pushed students intellectually and personally," said one. "His teaching technique taught me to read, analyze and discuss information critically, skills that I used constantly during my master’s program," said another.