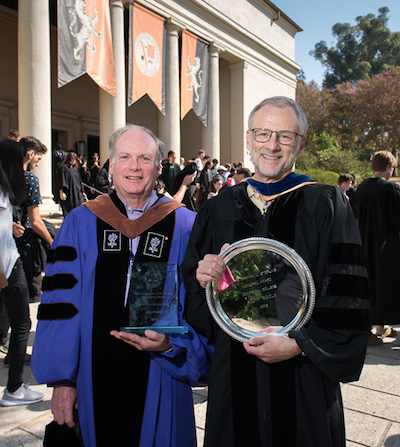 To the rhythmic thumps of taiko drummers, 508 members of the Class of 2020 trooped into Thorne Hall on August 30 for Occidental’s 129th Convocation ceremony, a tradition that formally marks the start of the academic year and welcomes the new class.

This year’s featured speakers were faculty members Amy Lyford, professor of art and art history; Sasha Sherman, assistant professor of cognitive science; and Richard Mora, associate professor of sociology. All addressed how this year’s theme, "Re-envisioning Metropolis: Los Angeles and the Urban Arts," could be viewed through the lens of their particular disciplines.

To Lyford, art is a form of social communication and an expression of ideas that "represents the world as it could be." For cognitive scientist Sherman, art raises questions about how we perceive light, color, space and form, as well as "the relationship between our inner worlds and our external realities." For sociologist Mora, artistic expressions are "sociocultural artifacts that provide insights into communities and societies."

Established in 1972 in memory of former College trustee Graham Sterling, the Sterling Award is presented each year to a professor with a distinguished record of teaching, service and professional achievement.

Bogue has taught at Oxy for over 30 years.  His research uses the paleomagnetism of rocks to investigate reversals of the Earth's magnetic field and the geologic history of far-traveled terrains in western North America.

"He has had a profound impact on his department, his division and the College as a whole," Thompson said, noting Bogue’s field research, which often involves his students; his numerous peer-reviewed articles; and his assistance in garnering grants for the College, including a recent $600,000 National Science Foundation STEM grant to fund financially needy math and science majors.

The White Teaching Prize is awarded to faculty members nominated by students for engaging teaching methods and effective intellectual or scholarly mentorship. The prize is made possible by a generous gift from trustee emeritus Tod White ’59 and his wife Linda White.

"Professor Gonzalez challenged me to think critically about how our systems of power undermine justice for marginalized members of our community," said one student. "No one deserves this award more than my mentor," said another.

Frank joined the Occidental faculty in 1986. A fellow of the American Academy in Rome, his academic expertise is in Italian Renaissance art. He has served in a variety of academic and administrative positions at Occidental, most recently as vice president for academic affairs and dean of the College. He has also been the chair of the art history and visual arts department. In addition, he has served on committees and elected bodies, including the faculty council and the advisory council. He returned to teaching in 2011.

Frank regularly teaches a course on Michelangelo that culminates in a three-week trip to Italy. Said one student: "Listening to Professor Frank lecture while standing in the Medici Chapel in Florence was one of the most profound experiences I’ve ever had."

"Michelangelo believed that there was an ideal figure inside of every block of Carrara marble he stood in front of," Frank said upon receiving the White award. "All he had to do was chip away until it emerged. That is undergraduate teaching…I cannot tell you all how deeply satisfying my Occidental teaching career has been."

"At its core, an Occidental College education is a profound, life-altering experience," President Jonathan Veitch told the first-years gathered in the audience. "Convocation is a recognition of the seriousness of our mutual enterprise, and of your role as scholars who have earned the right to be here."