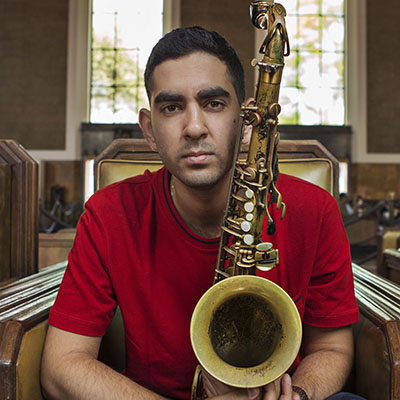 Daniel Rotem is a saxophonist, composer, arranger, bandleader, and educator.

Growing up in Israel by the Mediterranean Sea, Daniel fell in love with the freedom and potential for expression he found in Jazz after starting to play saxophone as a teenager. His musical beginnings in Israel's Thelma Yellin High School for the Arts and the Rimon School of Music instilled in Daniel a deep reverence and love for the tradition and history of jazz, and a yearning to travel far and wide to receive the best musical education he could, on and off the bandstand. He was fortunate to experience both: He is a graduate of Berklee College of Music and the Thelonious Monk Institute of Jazz Performance (now the Herbie Hancock Institute), and also had the privilege to perform and record with artists such as Herbie Hancock, Wayne Shorter, Dee Dee Bridgewater, Billy Childs, Terri Lyne Carrington, Stevie Wonder, Jeff Parker, Darek Oles, Lionel Loueke, Miguel Atwood-Ferguson, Josh Nelson, Anat Cohen, Sara Gazarek, and many more.

As a member of the Monk Institute Ensemble, Daniel went on a U.S. State Department Tour to Morocco and got to lead and narrate a jazz history masterclass and performance at the White House hosted by Mrs. Michelle Obama, as part of International Jazz Day in 2016. Daniel has performed around the world at acclaimed festivals including the Monterey Jazz Festival, the Playboy Jazz Festival, the Red Sea Jazz Festival, the Montalcino Jazz Festival, and at famed venues such as the Lincoln Center, the Kennedy Center, the Hollywood Bowl, the Microsoft Theater in LA, and many more.

He released four albums of his compositions and arrangements: his debut 'Be Nice' was released independently in February 2017; the anticipated tour-de-force second double album ‘Serenading the Future’ was released on September 28, 2018 to praising reviews, and in December 2018 an album he recorded with a quartet co-led with alto saxophonist Josh Johnson entitled ‘Sweet Stuff’ was released by Fresh Sound Records. In December 2021, Daniel released solo saxophone record reflecting on the year of isolation as a result of Covid-19, and "as an expression of yearning for the musical reunions to come." Daniel can be heard on releases and scores by Alain Mallet, Christian Euman, Kris Bowers, Kuba Stankiewitcz, as well as with Chilean artist Mon Laferte on her 2019 Latin GRAMMY Award winning album 'Norma'.

Daniel has taught at the Stanford Jazz Summer Camp and Jazz Institute, and has been a teaching artist at the Los Angeles County High School for the Arts (LACHSA) since 2016. In August 2020 he was commissioned to compose a piece for a chamber ensemble by the Los Angeles Jazz Society as part of the “New Note” project, and has completed  his first film score for the film ‘Mentally Al’. In March 2021 he was selected as a Finalist in the International Songwriting Competition for his song "The Fittest and the Survival of the Unfit", which will be released on his next studio album.