A senior from Portland, OR, Jazmin is a Spanish Studies major with minors in public health and kinesiology. 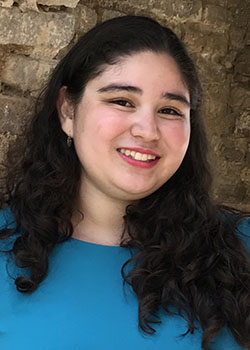 As a first-generation college student, what are some of the challenges you faced that some of your peers perhaps did not?

I didn’t know what to expect coming into college since I didn’t know anyone who could share their college experience with me and prepare me for what college life would be like. My lack of knowledge about how college works made my transition even more difficult. I was unaware of the available resources and opportunities, and I didn’t know how to ask for help. I had to navigate the college system on my own, and even as a senior I’m still trying to figure it out.

In my first year, I didn’t feel confident attending my professors’ office hours because I was unsure how to approach them, and I felt uncomfortable and even intimidated going into college offices like Financial Aid. Not only was it difficult for me, but it was also difficult for my family. They didn’t understand why I wasn’t staying at home and was instead leaving to attend an out-of-state college. No one in my family could relate to what I was experiencing there. When I would return home during breaks and my family would ask me about college, I found it hard to explain to them what I was doing and going through.

As a first-gen student there’s a sense of isolation and worry because you feel that everyone else knows things that you don’t and that you should know—it feels like everyone is ahead and you’re behind. Like me, many first-gen students are also BIPOC and/or from low-income households, which adds more challenges to being successful in college. First-gen students lack connections, career experience, and "insider" knowledge. They have to learn how to adapt to their new environment while navigating it on their own and build their networks and career from scratch.

Why were you inspired to get involved with the First-Gen Coalition at Oxy, and what needs do you hope it will serve?

As a first and second year student, I had support from other first gen and BIPOC upperclassmen students on campus. They shared with me their experiences and the knowledge they had acquired, informed me of resources, and gave me advice, all which helped me tremendously in my college path. My peers, both those that have graduated and those younger than me, inspired me to be part of the First Gen Coalition. I want to honor and recognize the efforts of the first gen students who helped me by following in their steps and acting as a mentor, doing for others what they did for me. I also aspire to be a role model to underclassmen and assist them in being successful students.

In my time at Oxy I’ve witnessed the immense need for support for first gen students. First gen students at Oxy are hard working and perseverant, and have always supported and advocated for each other. However, in the past there has been little to no institutional support at Oxy for first gen students so they had to seek out information on their own. In addition to providing academic resources, networking and career opportunities, and workshops, I hope that the First Gen Coalition can establish a support system for first gen students, give them greater visibility on campus, and lift the weight off of them to teach themselves and others about college.

How has the programming gone so far this fall?

We recently had a First Gen Mixer and a CSP writing workshop for first year students. The First Gen Coalition established the First Gen Connection group, which meets every first and third Thursday of the month. Anna Rivera, a psychologist at Emmons and member of the First Gen Coalition, also facilitates drop-in hours for informal counseling for POC, LGBTQ+, first gen, and international students. We are in the planning stage of developing a “buddy system” between upperclassmen and underclassmen. There are other workshops being planned, with topics including financial literacy and imposter syndrome. We welcome student feedback and try to plan our workshops around what students want to know about.

What has been the best part about your work to help grow the First-Gen Coalition?

Fulfilling my predecessors' visions and seeing that many people from multiple departments around the college are committed to helping first gen students, because for years first gen students have fought to institutionalize support for our community. Also, receiving positive feedback from current first gen students and witnessing how excited they are that an organization to help and support them has been established.