A filmmaker and AR/VR creator, Aleem Hossain was selected for the initial Oculus Launchpad program, a virtual reality incubator run by Facebook/Oculus. 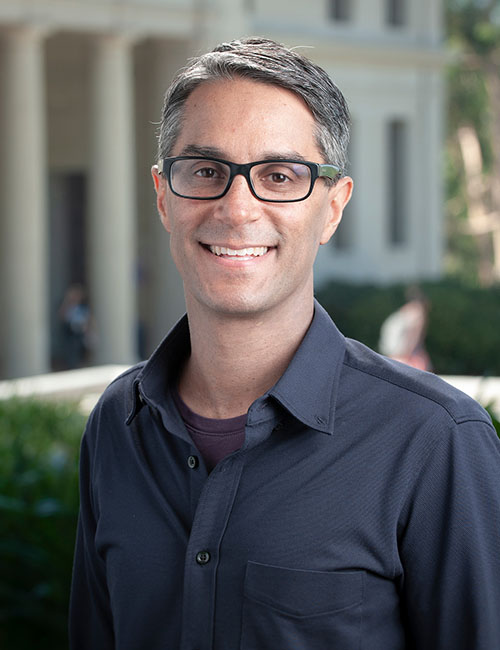 After We Leave, a science fiction feature film Hossain wrote and directed, had its world premiere at Sci Fi London in May 2019 and was awarded Best Feature Film at the festival! Watch an interview with Hossain

Hossain, assistant professor in media arts and culture, has a B.A. from the University of Chicago and an MFA from UCLA. He recently premiered his first feature film, After We Leave, a gritty sci-fi drama, and finished an anti-bullying VR project for Google that is being used in middle schools around the world.

When did you take an interest in film?
Hossain: It happened in stages. As a kid, my parents took me to see E.T. and they tell me that I walked out of the theater and said I wanted to be a film director. The joke among my high school and college friends is that I was the last person to know that I was going to be a filmmaker… they’d noticed for years that every time we went and saw a movie they’d have to sit for hours at a late night diner while I talked a mile a minute about every detail. When I was an undergrad at University of Chicago, the film club acquired a big clunky video camera and I checked it out and started using it without any real guidance. I made my first film…and could feel viscerally how not good it was…but I was hooked.

What attracted you to Occidental?
Hossain: The title of the professorship spoke volumes: Assistant Professor of Media Production & Digital Storytelling. That last part – “digital storytelling” – suggested to me a place where people were not fetishizing the latest tech but rather exploring how each new development can impact the future of storytelling. I also have a real love for the idea of liberal arts education.

What do you enjoy most about teaching?
Hossain: I’ve been teaching for 13 years and I still wake up excited to see the latest progress my students have made with their scripts or films or VR projects. I feel ridiculously lucky that I get to work with emerging creators who are finding their voice, thinking critically about the state of the art, taking risks, and expanding the horizons of time-based media.

Your teaching and research are focused on expanding “how we tell stories and who gets to tell them.” How has digital storytelling broken down barriers to potential filmmakers/storytellers?
Hossain: Film/TV is the most powerful form of communication on the planet. It speaks to everyone, activating our primal emotions, creating norms and values… but the group of people making Film/TV are far from reflective of everyone. There are two big remaining challenges and I’m trying to address them in the classroom. First, we need to break down the barriers in the mainstream established industries – the only places where people can both make media and make a living. Second, we need to break down the barriers of distribution. Youtube and the big streaming services theoretically allow almost anyone to reach an audience of billons but the reality is that most of the work on those platforms goes unnoticed… it’s the projects that are backed by advertising dollars or corporate interest that most often get the prominent placement. The good news is, awareness of these issues has never been greater. In Media Arts and Culture, we’re working to create a generation of creators and thinkers who will help solve these challenges.

What can virtual reality do that traditional filmmaking cannot?
Hossain: I promise this is not me dodging the question… but I think the answer is: We don’t know yet. If we’d gone back to the turn of the last century and asked the pioneers of cinema what it could do that theater or literature could not, I’m not sure how accurate their answers would be. One of the most exciting things about working in VR right now, especially in the context of a liberal arts college like Oxy, is that we are grappling with deep foundational questions.

Outside of work, what do you like to spend your time doing?
Hossain: My wife and I have two kids, a 4-year-old and a 7-year-old. So much of our time outside of work is having fun with them (or struggling to get them to school and bed on time). In the few remaining hours we’re always eager to eat something awesome… I’ve been in L.A. for almost 20 years and my love for this city is fueled by its movie and food culture.