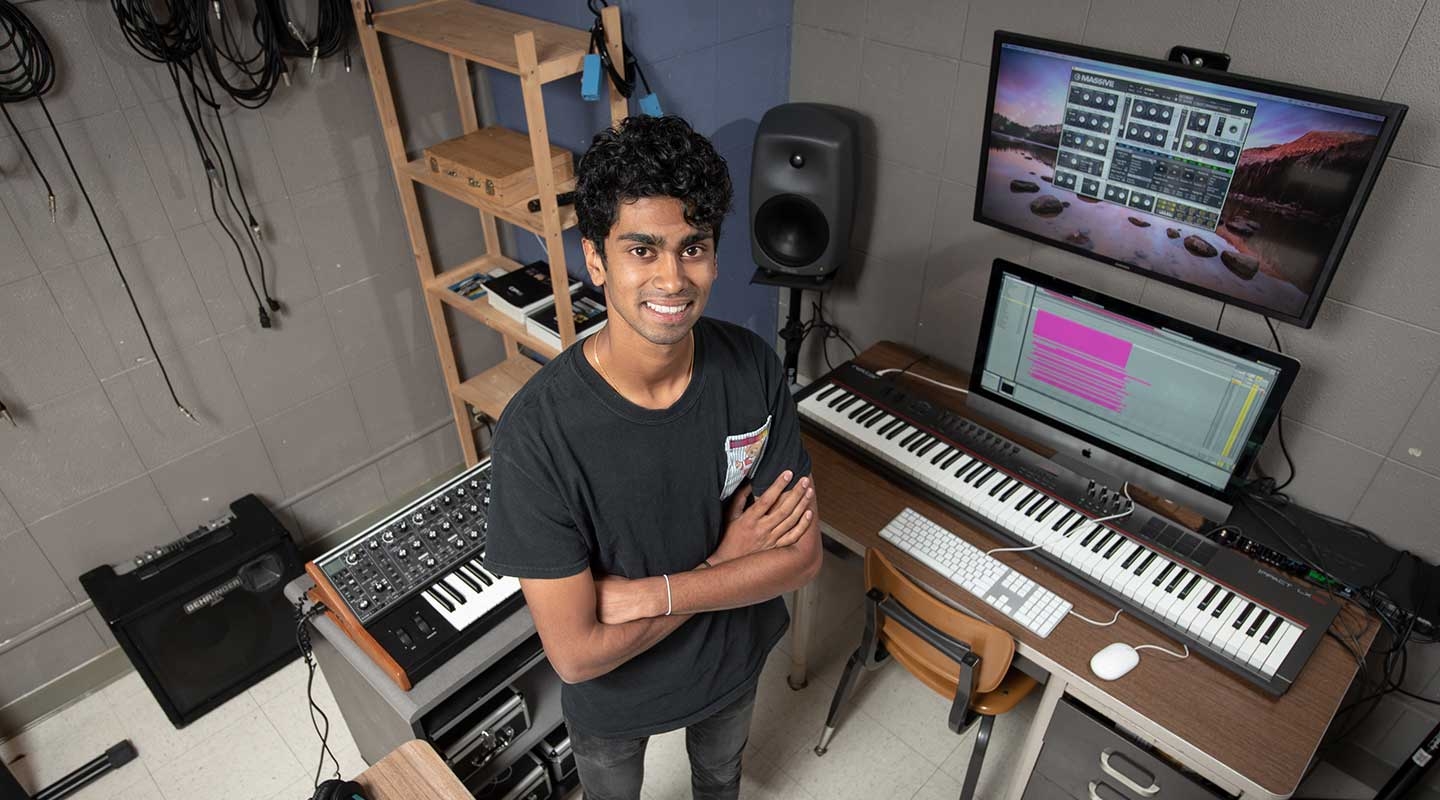 From Oklahoma City to the urban lights of Los Angeles, music production major Anoop D’Souza is creating a foundation for a burgeoning music career through a liberal arts education.

As a working music producer, he knows what it takes to break into the industry. His experience as an artist and a student is helping Occidental’s music department shape its new production track, while providing him with a space to learn, create and collaborate with peers and faculty.

I was really fortunate to travel a lot as a kid growing up, and I knew that I wanted to attend school outside of Oklahoma. In high school, I was being recruited around for tennis, and I chose Occidental because I felt it was the most well-rounded. The students here are academically at a high level, but they are also very relaxed, and everyone is having fun. I planned to study neurology and thought I wanted to go into the field of brain surgery. I was taking classes to go down that path, but my life has kind of changed a lot since then.

Before coming to school, I had lost someone close to me. All of my friends had already left for college, and one day I accidentally opened GarageBand on my laptop, and that was how I distracted myself: by making music in the three weeks before coming to Oxy. I hadn't played instruments since I was a kid. I started playing piano when I was 6, then guitar when I was 8 and drums when I was 10. Playing drums and guitar tapered off; my family had always strongly encouraged me to play the instruments, but I wouldn't practice. Now I'm incredibly thankful for having learned to play. My family wanted me to be a well-rounded person.

To fulfill an arts credit, I decided to take a class in film scoring. Since I had started producing music, I thought it would be a cool class. From there, Professor [Adam] Schoenberg approached me about being part of the music department, and together with Professor [David] Kasunic, they introduced me to the idea of creating a music production major. Kasunic explained that they wanted to start a new music production track and wanted me to be a part of its inception. I was very skeptical at first—it's possible to do music production without taking formal classes. But it definitely gave me something at this school that I want to be a part of. I feel a responsibility to help build this program for future students. I've built a relationship with Schoenberg and Kasunic that I like a lot, because it's not just them always giving me advice. They actually ask for my input all the time in terms of the direction they're thinking of taking the program, and discussing which artists should be invited to lecture—it's part of the beauty of being in a smaller school setting.

With a music production track, the liberal arts education is good in terms of giving you a foundation. In a class with Professor [G. Simeon] Pillich, you're listening to a bunch of jazz and African music, which has actually introduced me to artists whom I sample in my own music production. With music history and theory classes, you learn how to problem solve and analyze, skills that are important in terms of making your own music. We're learning about set classes, and examining how a composer got from A to B using math. At first, these lessons didn't seem directly applicable, or even fun for that matter. The concepts are actually quite hard but very useful. It puts you into a different frame of thinking that can be applied in any field. The music department has also created three new hands-on classes: Introduction to DAW, which is a digital audio workstation; Mixing and Mastering; and Live Recording and Techniques. It's literally all workshops every day, which is incredible for someone who wants to do music production.

The resources—not just at this campus, but the connections you're able to make in Los Angeles—make this the hub in terms of music. I'm working on my first EP and I'm also working simultaneously to produce for other major-label artists. I'm at the studio working with other artists and producers most evenings, which is tough because I'm trying to balance that and school. [Oxy is] literally 15 minutes away from Studio City and downtown, and that's something special you don't really get anywhere else. The biggest thing I've gotten out of Oxy is opportunities. I only wish the opportunities were more apparent to the student population, but whenever students do find out about these things, they usually jump on them. If you express interest to anyone at this school, whether it be to peers or staff members, people will help you do the things you want to do. All you need to do is ask.