Encouraged by faculty mentorship and an internship with the U.S. Department of State, Belle decided to pursue a master’s degree in international relations in Germany. Oxy’s career center helped her at each step of the way. 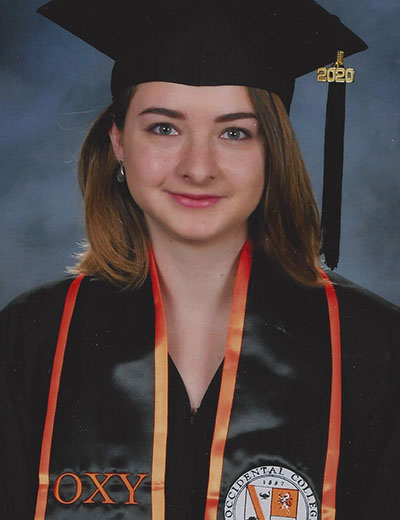 In what ways did a liberal arts education help shape your aspirations?

I had no idea what I wanted for my future career when I came to Oxy. Even today I’m still not one hundred percent sure, but undertaking a liberal arts education allowed me to explore different avenues and narrow down the subjects in which I was interested. Historically, I’ve delved more into the humanities than STEM subjects, but I loved taking Geology 105 for my lab science requirement. My graduate studies have benefitted from how I learned to step outside of my comfort zone at Oxy.

What inspired you to pursue your current field?

My professors inspired me more than anything else. I’m glad that they were so available to meet outside of class since there aren’t thousands of other students at Oxy competing for their time. The conversations I had with my professors ranged from the climate crisis to the current political landscapes across the U.S. Enrolling in a master’s program for international relations was a natural progression, and I applied to a program in Germany because I wanted to widen my international scope. Plus, I had studied abroad in college and really loved it.

Describe the process you went through to land your college internship.

Through the Hameetman Career Center, I had heard about internships through the U.S. Department of State and decided to apply. I was able to intern in the Public Affairs department of the U.S. Embassy to The Hague in the Netherlands. The process took almost a year, partly because of remote interviews and the nine-hour time difference, and partly because it was a government internship. I applied, was sent a few follow-up surveys, and then had two interviews at around 4 a.m. Honestly, I believe my resume is what made my application successful, and I had worked on it for hours.

I learned so much about applying for jobs, having a successful interview and formulating a resume.

Did you utilize services and support provided by the Hameetman Career Center?

Yes! I had quite an “in” with the HCC while in school because I worked there as a student assistant before being promoted to a peer adviser. I learned so much about applying for jobs, having a successful interview and formulating a resume. I also took part in Oxy’s annual career fair, where I was first able to greet and network with potential employers as a student-worker, and then introduce myself again as an undergrad looking for a job.

Do you have any advice for current students?

Before the pandemic, there was already a notable shift in the job search process, with networking events happening online rather than in-person. Now, it is the default. My advice is to meet with a career adviser to make sure your resume is polished and your cover letter is effective so that they’ll catch the attention of someone on the other side of a screen. And also, enjoy your time at Oxy!