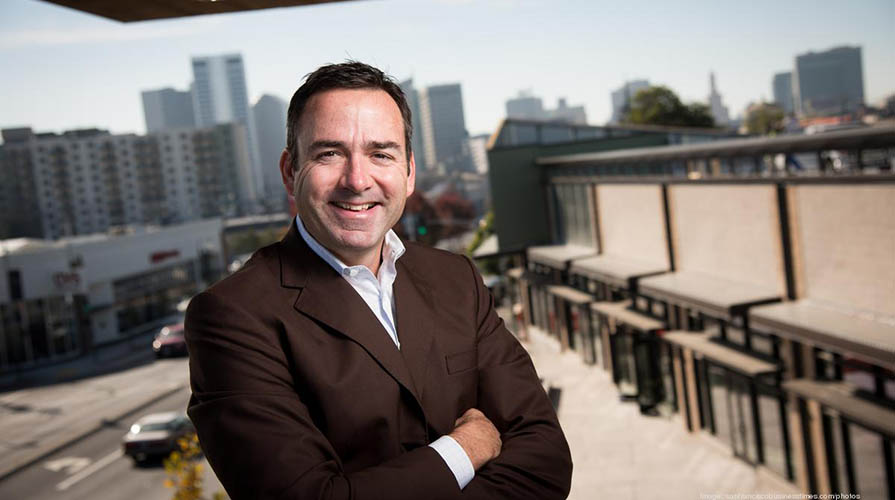 Ken Lowney is president of Oakland-based Lowney Architecture. His approach is rooted in his belief that architecture is more than simply buildings, and—if thoughtfully and responsibly done—it can positively contribute to society and advance a community.

How did you decide on a philosophy major?

I tried classes in different majors like diplomacy & world affairs and history until I took my first philosophy class. It was an introductory class, and I loved it. It was taught by Marcia Homiak, who is passionate about teaching. She filled the room with excitement, curiosity and intellectual stimulation. She made me interested in philosophy as an active topic that is accessible to everyone. There were a lot of excellent [philosophy] professors at Oxy: I also remember Saul Traiger and William Neblett. Being a philosophy major at Oxy made me participate in a process: it felt as if I were learning the history of philosophy, but also that I was doing philosophy.

Which aspect of philosophy attracts you the most?

We have intuitions about how the world is, and philosophy tries to clarify these intuitions and make them explicit: the way the society works, the cause of revolutions, what we need to be a person, or what is time and space. I always find it exciting to [think philosophically about] these aspects of my existence and experience.

How did you move into your career after majoring in philosophy?

When I was studying philosophy at Oxy, the most frequent question I got was, “What are you going to do with that? It’s a waste of time.” To deflect them, I would tell them that I was going to study law and become a lawyer. But I was never serious about being a lawyer. When I was in my senior year, I stepped back and thought, if I could do anything, what would I do? My answer was architecture. As I started to look into it more, I saw a lot of connections between architecture and philosophy. As a matter of fact, the discourse of architecture in the 1990s and 2000s was, and still is, heavily influenced by philosophy. So now, when I am presenting an [architecture] project, it’s a kind of philosophical preparation: I am making an argument of how things are and how they should be. For me, I am successful because of my philosophical background.

How is philosophy related to your architecture projects?

In a sense, I practice social and political philosophy in my architecture projects. We are not just building buildings by themselves: we are building them in our community. And how people in our community interact and create is partially defined by the buildings in the cities. The interest in how society functions changes, how it could be changed, and how we might want it or not want it to change starts with philosophical inquiries. Architecture is very similar in how it engages with society. When I am presenting a project, I won’t quote Rousseau or Marx, but certainly in the back of my head I’m thinking about the impact of buildings and architectures and the people living around the buildings. It’s all part of a big philosophical conversation about what makes cities and our experiences in cities.

What would you say to senior philosophy majors?

If you are graduating from Oxy with a philosophy major, you should be proud of yourself: it requires hard work to accomplish. Philosophy is all about thinking: making an argument and making it work. Apparently, if you want to practice law, you could do that. But more importantly, you can do anything. You can go into marketing or medicine. Whatever your interest, from cinematography to politics, philosophy is a fantastic foundation. The discipline of philosophy gives you many skills that studying other subjects do not offer. The world is changing so much that if you study business, marketing, or communication, what you study could be superseded or outdated by the time you get out of school.

So it’s better to stick to training your mind: the ability to think and write, and the ability to think critically and independently. These are all qualities that every single high-level job requires. Because of that, don’t feel limited if you study philosophy. You should feel just the opposite: it’s the greatest opportunity you have. Some secondary degree might be required to further your education in a more specific way, but you would undoubtedly be great in your future business because you are good at handling situations by analyzing what is happening. Philosophy is an enjoyable thing, and to have it in your life is also a gift.