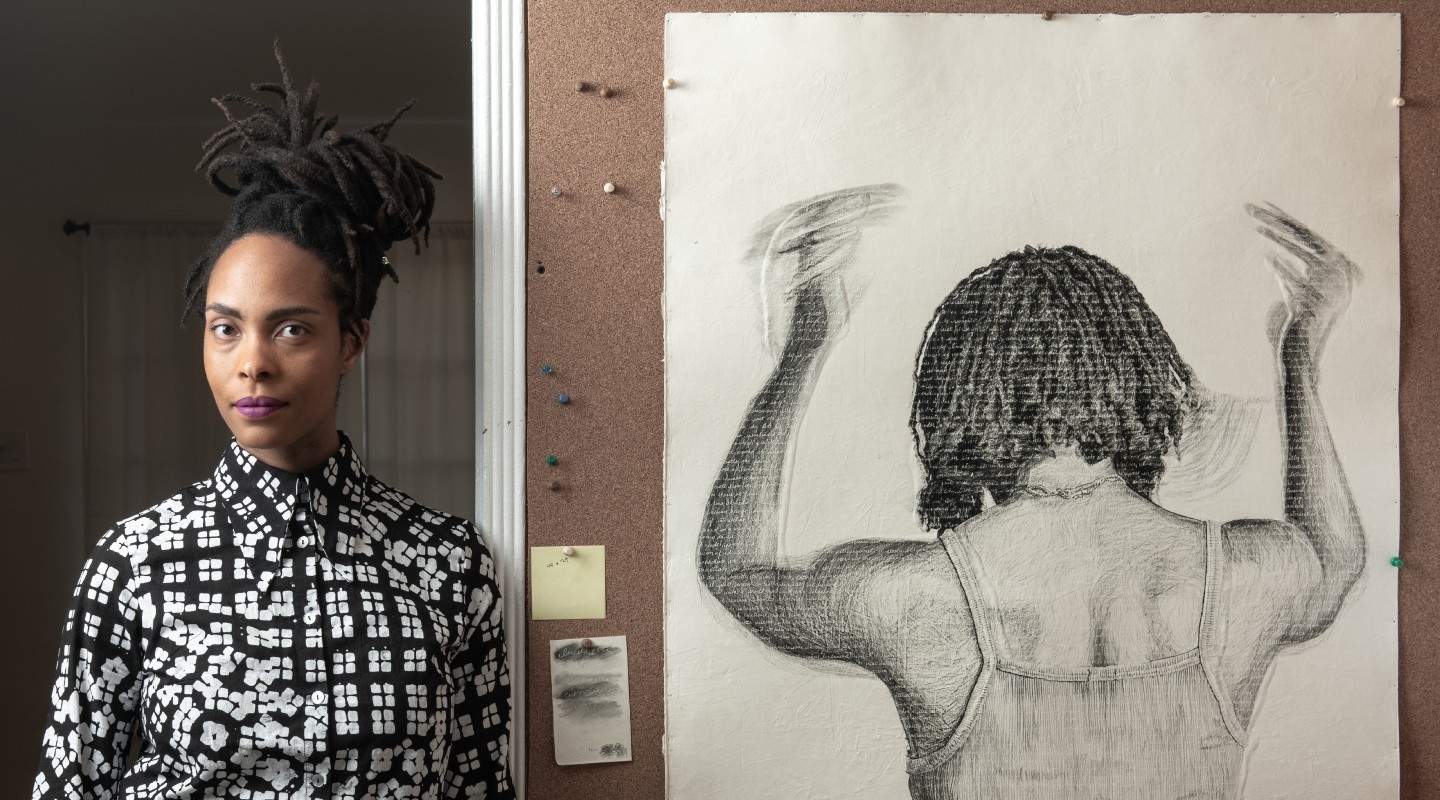 Kenturah Davis explores the relationship between words and humanity through her intricate portraiture—and L.A. Metro riders will be seeing a lot more of her work.

“I can’t remember a time when I didn’t want to be an artist,” says Kenturah Davis ’02. But her journey to this point—and the evolution of her intricate, evocative work—has been a long and circuitous path.

Kenturah’ portraiture involves what she calls text drawings. “They’re works on paper made by handwriting texts in repetition,” she explains. “Others are made by using rubber stamp letters and stamping out a phrase in repetition to render the figure. 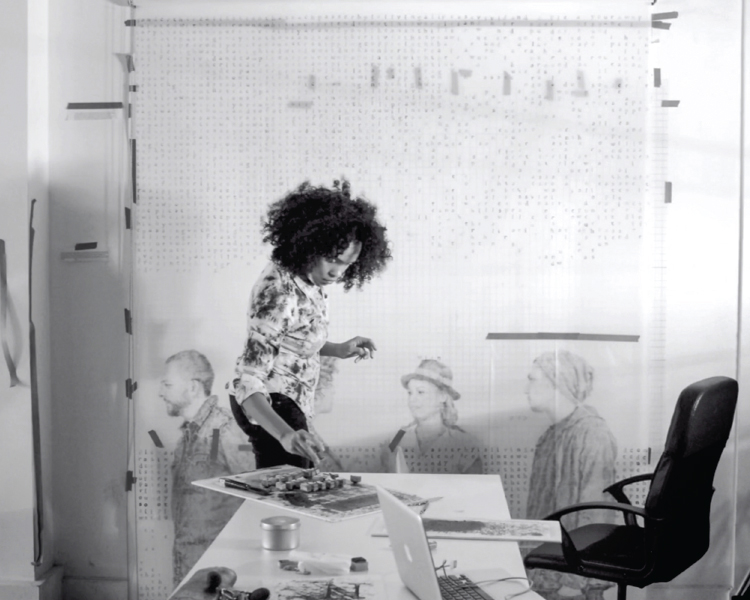 The drawings she created for Metro are an extension from a series titled Sonder, which she exhibited at the Papillion Institute of Art in Los Angeles in 2013. The name comes from a project called the Dictionary of Obscure Sorrows, in which writer John Koenig “was inventing new words and these really poetic definitions for them,” Kenturah explains. “Sonder basically describes the experience of noticing strangers and being curious about what their lives are like.”

Kenturah ended up using the letters of that word to render the images. “Everything kind of clicked in a way,” she says, “because that is the kind of experience you can have on a train or in public transportation.” 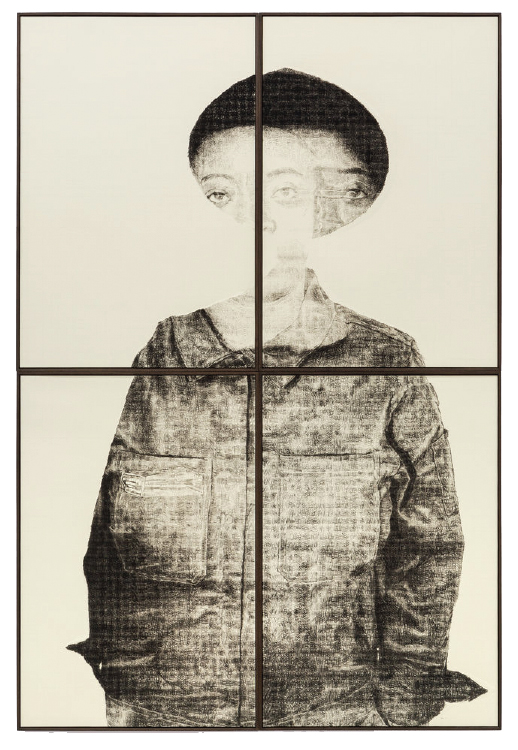 Occidental’s liberal arts program had the broadening impact Kenturah was hoping for, helping her think about ideas beyond just painting and drawing. She ended up minoring in anthropology, and her mind was opened up to other fields and how disciplines can overlap. “I started to think about language and linguistics and how they operate in our lives,” she says. “It had a huge influence later in my work.”

After graduation, Kenturah maneuvered the tricky worlds of making art and survival. She worked in West Hollywood as a receptionist at Gemini GEL (Graphic Editions Limited), an artists’ workshop and publisher. Kenturah stayed there for nine years, eventually rising to director of sales, putting in 40 hours a week while working into the wee hours at her Highland Park art studio.

A clothing designer friend invited her to move to Accra, the capital of Ghana, to manage production—a six-month gig that turned into a year and a half. “It immediately felt like another home,” recalls Kenturah. “It’s so vibrant. You’re going through the streets passing by goats and cows, but it’s also very metropolitan. I quickly fell in love with it.”

After returning from Accra, Kenturah enrolled at the Yale School of Art. Toward the end of Kenturah’ productive two-year stint in New Haven, L.A. art dealer Matthew Brown contacted her. He’d seen her last local show in 2014 at a gallery in South Los Angeles and was planning to open his own space. Brown wanted her to create work that would serve as his inaugural exhibition.

Kenturah’ show, Blur in the Interest of Precision, debuted in January 2019. 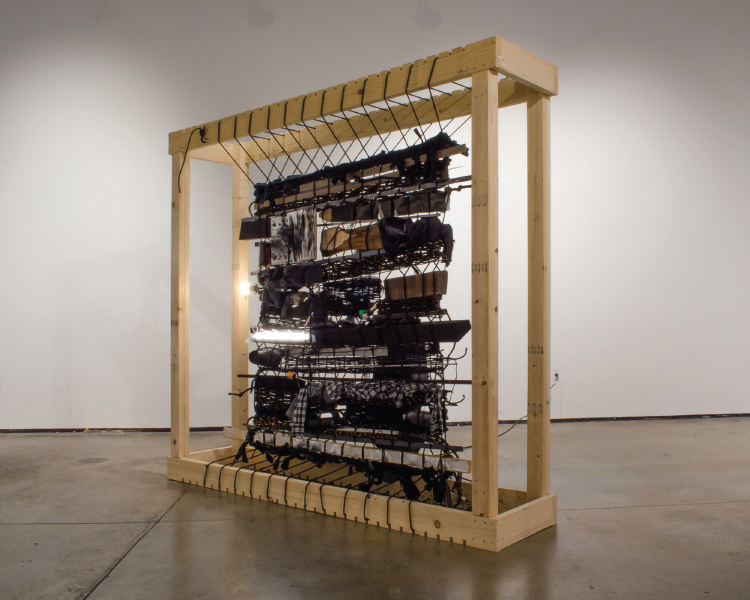 “The teachers I learned from the most were people who realized that—while they had a lot to offer their students—they didn’t know everything, and their students could have something to offer to them,” Kenturah continues. “It was like the classrooms were a space to experiment together. That’s the kind of atmosphere I tried to create in the two printmaking classes that I’ve taught.”

She’d like to continue to teach printmaking at Oxy, but as the demand for her art increases, it makes for a full dance card. Her first solo museum show opened Feb. 6 at the Savannah College of Art and Design’s Walter O. Evans Center for African American Studies.

“Right now I’m trying to figure out what that balance is like,” Kenturah says. “I don’t know how Linda [Lyke] and all the other fantastic faculty that I’ve had teach full-time and make art. I love it so much, but it’s tough sometimes keeping up with the deadlines these days.

“But that’s a good problem to have,” she adds.