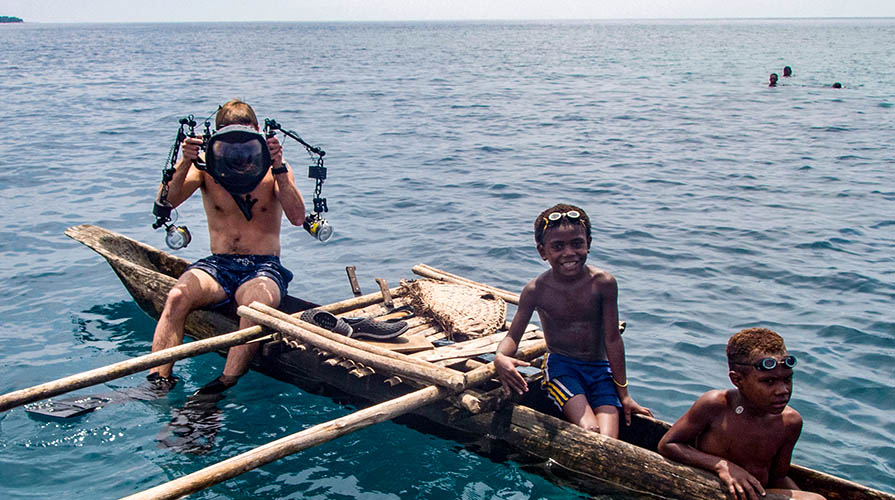 Morgan Bennett-Smith is currently a master’s student at the Red Sea Research Center, and his studies of coral reef ecology and how reef organisms adapt have taken him (and his camera) all over the world.

Share the highlights of what you’ve been doing since graduation.

Since graduation, I’ve worked for the National Oceanic and Atmospheric Administration’s (NOAA) National Marine Fisheries Service in Alaska. More recently, I’ve been at King Abdullah University of Science and Technology as a master’s student in the Red Sea Research Center. I work on a few different projects, but my main focus is on clownfish population structure, connectivity and ecology in the Red Sea. I also produce media for the Red Sea Research Center, with a focus on underwater photography. Media can be a very powerful tool for research and conservation, and recently I’ve begun to expand my work through different projects locally and abroad. I spend a lot of time in the field, surveying coral reefs and taking samples, but we also collaborate in other regions like Papua New Guinea, where I was recently on a two-week research cruise.

Did you have a favorite class at Oxy? What did you like best about the marine biology program?

Tough call. One of my favorite classes was Professor [Gretchen] North’s Plant Form and Function course. Professor North makes you appreciate plants like few else can! I liked how accessible our marine biology program was; as a freshman, it was easy to start a conversation with professors in the department and become involved in research outside of the classroom. This was an important gateway to collaborations and projects down the road, and it led to a series of important milestones in my undergraduate career. I also really enjoyed driving the lab’s boat every month. I’m not sure why I was trusted with driving that thing, especially when it came to parking it in King Harbor next to two expensive yachts, but it was great to be involved in a meaningful way with an ongoing research project—with some real responsibility—as an undergrad. I understand that our lab’s new boat is much nicer...perhaps they would not let me drive that one.

How did Occidental transform your life/prepare you for your career?

Occidental was really critical in developing my early interests in marine science. I learned to dive while at Oxy, and I became a research diver there, and since then I’ve logged hundreds of scientific dives in different seas across the world. Oxy afforded me an opportunity to grow independently in marine science, but with a support network to fall back on if I needed it. My greatest achievements as an undergraduate in marine science happened far away from Occidental—in the Caribbean, at the Woods Hole Oceanographic Institute and in the Red Sea as a senior—but they were possible because Oxy provided a strong foundation from which I was able to branch out. As a Richter Fellow my junior year, I was able to participate in research with one of the top research institutions in the world, an experience that opened new doors. As a member of the Men’s Soccer team, I also learned a lot about balancing sports, research, coursework and external research projects—Oxy really helped me improve my juggling skills. And, academically, the College allows you to grow as much as a student as you want to.

What are you most proud of having done since you graduated?

I’m very proud to have made it back alive from the Bering Sea. I worked as a biologist on commercial fishing boats a few months after graduating from Oxy, and it was brutal. Blowing snow, huge freezing waves, the whole package. I was in the same fleet, operating out of the same ports, as the Deadliest Catch fishing boats, and it was insane. I was an experience I am glad to have had, but I much prefer the flat, 81º waters of the Red Sea, where I am now.

If you were to give current Oxy students professional advice, what would you say?

Career advice: apply, apply, apply. Even if you think you have no choice at getting that internship, that part-time job or that grant, apply anyway. I was rejected from things I thought I should have gotten in my sleep, and accepted into things I thought I had no chance at. Give yourself a chance. Plus, like it or not, the more applications you write, the better they get. Get comfortable with being rejected sometimes. You don’t have to like it, but don’t let it slow you down.