Meet extragalactic astrophysicist Sabrina Stierwalt of physics, who observes galaxies beyond our own to understand how they form and evolve—and ultimately understand our own cosmic origins. 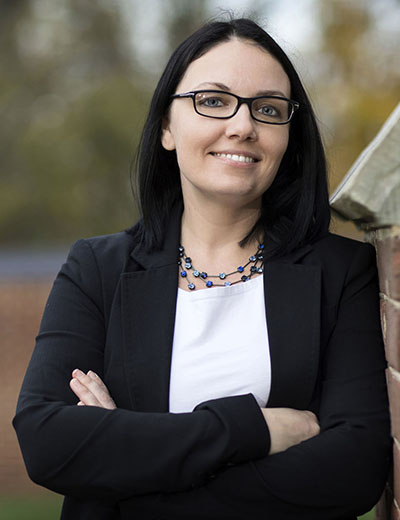 Stierwalt comes to Oxy from Caltech, where she has been a staff scientist since 2017. Her research uses multi wavelength surveys to study the cosmological assembly history of galaxies. She uses nearby, interacting galaxies to understand how stars formed throughout the universe’s history. She teaches courses in Astrophysics, Modern Physics, Astronomy (for non-physics majors) and a writing seminar for first years on cosmology called “The Birth of the Universe.”

Tell us about the research you’re working on right now.

I was just awarded a large grant from the National Science Foundation to study the star formation and growth of black holes that happen when two galaxies collide. In particular, I look at the physics of mergers of small galaxies—we reside in a rather large galaxy, the Milky Way, and we think that our galaxy grew from the repeated merging together of smaller galaxies. The grant will allow me to take students on observing trips to telescopes in places like Arizona, Hawaii and Chile.

In astrophysics, we can't manipulate our objects of study. We can’t pluck a distant galaxy out of the sky and poke at it from different angles in the lab. Instead we often have to make do with the information that we’ve got. I often incorporate that kind of creative thinking in the classroom—how can we work with a limited set of information in order to answer the questions we want to ask. I also always like to point out the areas of astrophysics that are still wide open as far as discoveries waiting to be made.

Talk about a moment in class when students have taught you something.

My students have taught me that personal connections are so important. We are all complex humans outside of this one course so why does all that other stuff have to be forgotten when we enter a physics classroom? For example, in learning about a famous relationship in astronomy named after its discoverer, I mentioned how that person happens to be a competitor of mine in one of my current research projects and I shared some of our more animated discussions. This led to a great impromptu discussion, driven by the students, about how science is both collaborative and competitive and what this particular debate meant for me as the more junior scientist in my field. And did everyone remember that relationship when it appeared on their test? You bet they did!

How does Oxy’s Los Angeles location influence or inform your teaching and research?

Los Angeles, despite its lack of stars due to light pollution, is actually one of the best places in the world to be an astronomer. There is such a high concentration of leading astronomy institutions like Caltech, NASA’s Jet Propulsion Laboratory and UCLA, and we are a short drive from multiple observatories including Mount Wilson and Palomar. All of this activity makes it easy for me to stay connected to the leading research and then in turn incorporate that into the classroom.

I host a weekly science podcast called Everyday Einstein through Macmillan Publishing. Each episode is short (only about 6 minutes) and breaks down the science behind current events or long-standing questions. Each episode tackles a question like, how did water get on Earth? Do those ancestry DNA kits really work? What does the scientific evidence have to say about the latest health craze? I get about 30-50,000 downloads per episode and I’m always looking for ideas—so send me your burning science questions! I also spend time with my two young kids. They keep me pretty busy.