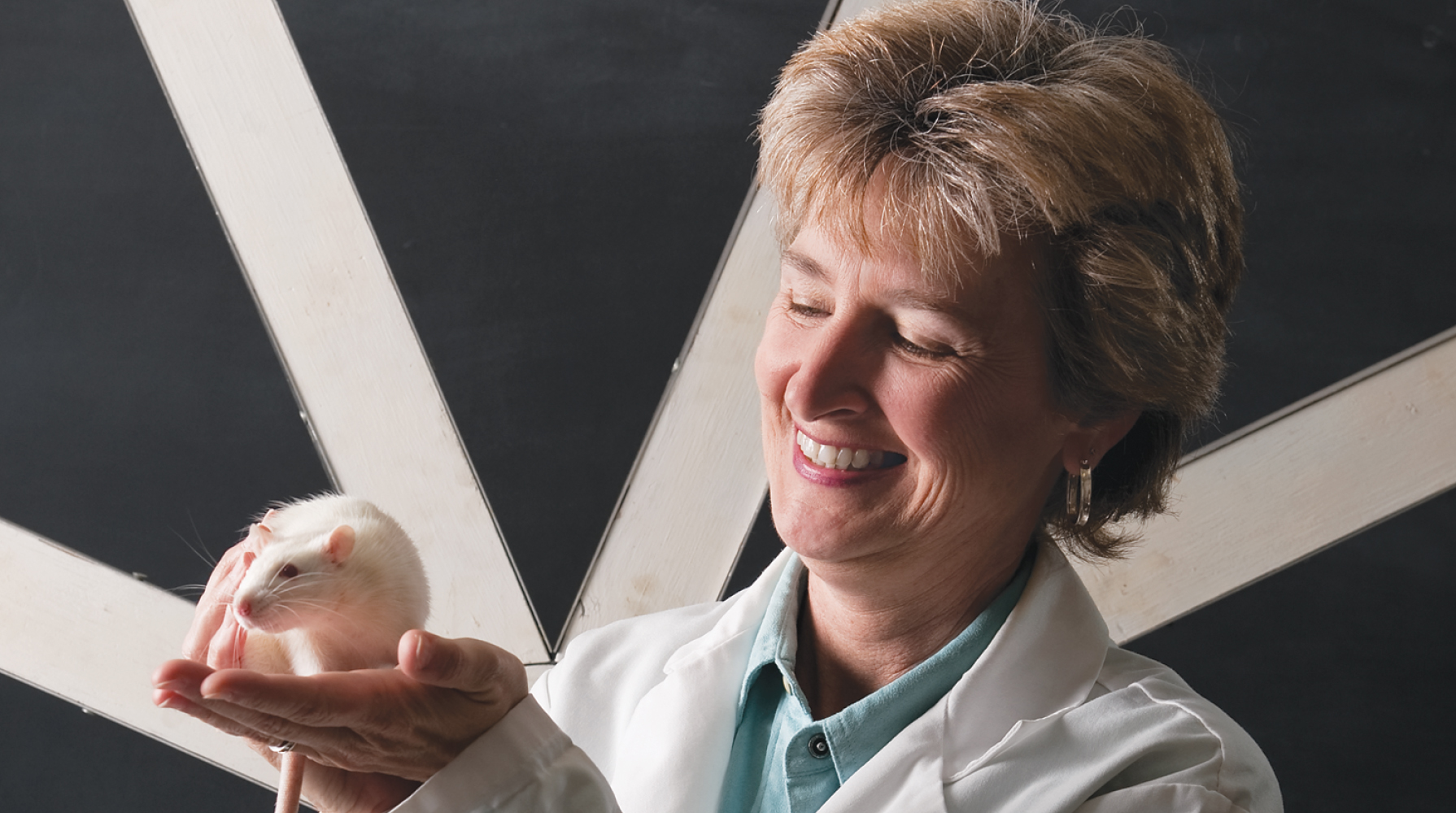 From Summer 2009: Professor of Psychology Nancy Dess measures emotionality and taste through her research with rats. How did one fincky rodent send her studies in a new direction?

Editor's note: Psychology Professor Nancy Dess will retire this spring after 36 years at Oxy. Dess and her work were profiled in the Summer 2009 Occidental magazine.

Nancy Dess’s rats do not have names—they are laboratory animals, not pets—but that makes it a little difficult to write a story about the one rodent in particular who changed the course of her research into taste and emotions at Occidental. So, with apologies to Dess—a professor and chair of the psychology department and the 2008 winner of the Graham L. Sterling Memorial Award for teaching, service, and distinguished professional achievement—let’s call this exceptional rat “Milo.”

But before we get to Milo’s story, a little background is in order. Like humans, rats have a fear of novelty—a condition known as neophobia. Stress and anxiety can increase neophobia, and saccharin (the high-potency sweetener in Sweet’n Low) is considered more novel to the palate than other sweeteners. “It’s a funny taste,” says Dess, who began to research taste emotionality and the organization of behavior late in her graduate studies and early in my postdoctoral careers. “It has a funky, metallic, or bitter aftertaste.”

As part of an experiment, Dess arranged to have a group of rats be predisposed to a saccharin solution before receiving a physical stressor in the form of a mild electric shock, thus taking away the novelty of the taste.

But a funny thing happened on the way to the stressor. “We gave a bunch of rats the saccharin to drink,” Dess recalls, “and sure enough, we came in the next day, and they’d all drunk a nice healthy amount—except for this one rat who had drunk none of it.” That would be the rodent hereafter known as Milo.

After checking on Milo’s health (“He was fine—I looked in, and he looked back at me”) and tapping the spout of the stainless steel metal water bottle for air bubbles, she returned the following day to find the same results. She switched the bottles with the plain water and saccharin-sweetened bottle; Milo switched sides as well. “This was a rat,” she says, “who did not like saccharin.”

Most rats, if they are given any sweetened solution, will drink it more avidly than if you just give them water. And the mystery of Milo “brought us to the fork in the road,” Dess continues. “The most common and ex­perimental response to this would be to throw him out; he’s a weirdo.” But because Milo seemed really interesting—and because she says Oxy has a history of encouraging faculty “to be active scholars and to do interesting work”—the decision was made to follow him.

They started selective breeding, taking Milo and a second rat “who was not nearly as remarkable”—and thus will remain nameless—“but drank less than an average amount of saccharin,” and mating the two of them with females that measured a bit low on the saccharin-consuming side of things. Conversely, they took their highest saccharin-consuming rats and bred them together.

That was 33 generations ago. “What we now have are Occidental high- and low-saccharin-consuming rats,” Dess says of the white albino rodents with the beady pink eyes. “You really can’t tell these rats apart by looking at them. You have to look at their behavior to see the evidence of this selective breeding process.”

“One of the things I love so much about science is the mix of the orderly systematic planful part of it with the getting thrown for a loop serendipitous something that you never imagined happens,” she says.

In the worldview of Nancy Dess, “Sugar is not an arbitrary commodity. The human shape of the world, the economic systems, the political systems, the trade routes related to those, the cultural glue and tensions that are related to commodity transfer—that might all look very different if we didn’t like sugar so much,” she said at the conclusion of her Sterling Award Lecture at Oxy on April 20. 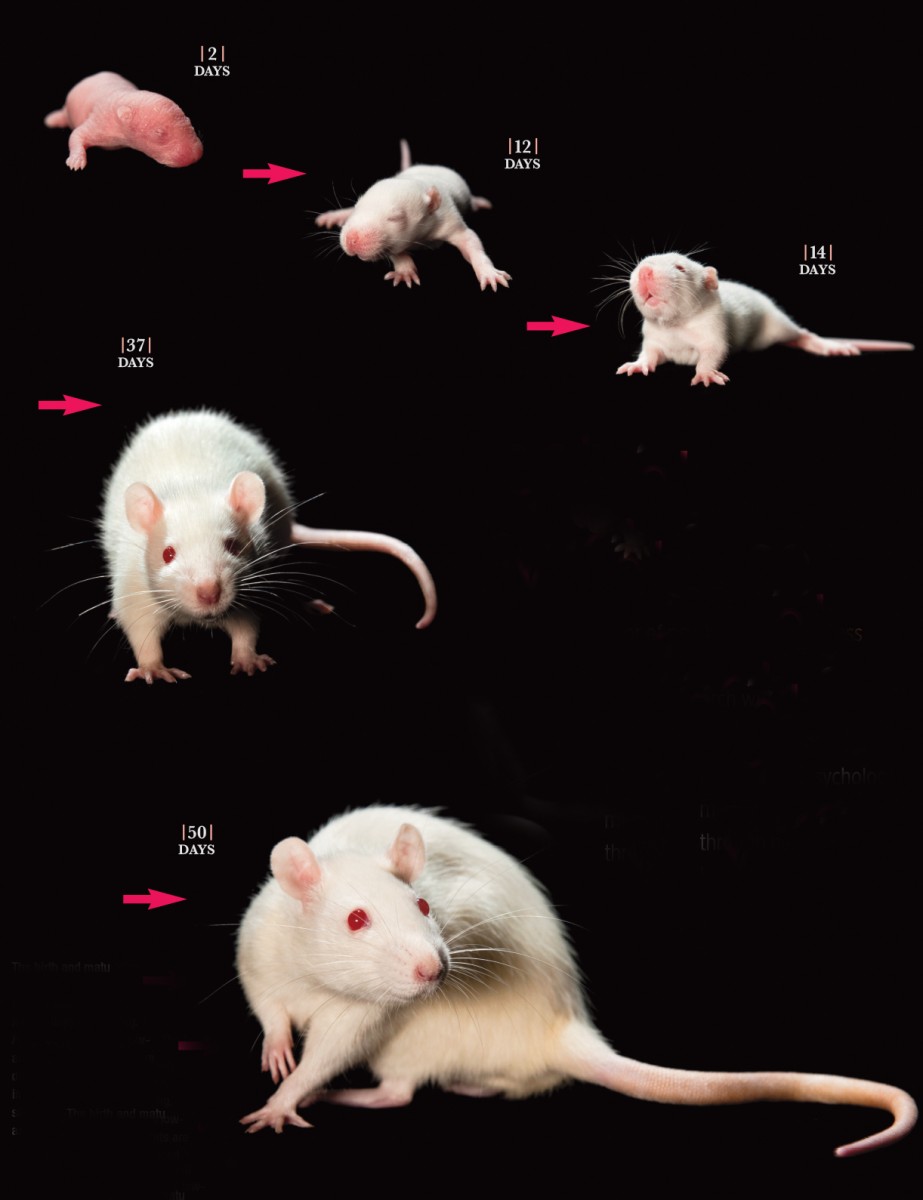 “My guess is a lot of people in charge at critical points in history have been more like high-saccharin rats,” she added. “It’s not just that they like sugar. They’re more impulsive; they’re less vulnerable to stress; they’re less anxious. Those are really good traits for putting brakes on unpleasant social things.”

Dess first developed an interest in psychology after taking an introductory course as an undergraduate at UCLA. From the beginning, what interested her most were the day-to-day questions of how things work—what she calls “the mystery in the ordinary.”

Despite the fact that her older brother had majored in psychology at UCLA (he’s now a clinical psychologist in San Diego), “I was never that interested in a clinical or counseling career,” notes Dess, who got her feet wet doing lab research as junior.

“A graduate student came to my physiological psychology class of 350 and said that he was looking for a couple of volunteers to help him with his dissertation research,” she recalls. “So I volunteered, and it was a rat lab that was looking at basic biological mechanisms related to Parkinson’s. I loved working with the rats, but I was not that interested in the more mechanistic neuroscience side of things. I was more interested in their behavior and what they were doing.”

When it came time to choose a graduate program, Dess opted for one that emphasized behavioral analysis. That led her to the University of Minnesota, where she studied under “an amazing mentor,” Bruce Over­mier, who is not only active in U.S. psychology

circles but also has been president of the International Union for Psychological Sciences. “I can see now that his influence showed me how can you focus on your research and think about it in a bigger context,” she says.

With Overmier’s encouragement, Dess became active in the American Psychological Association. She is currently the president of APA’s Division 6, the behavioral science and comparative psychology division, and has been a senior scientist at the association as well as chairing the APA’s Committee on Animal Research and Ethics. “That reflects Bruce’s influence, which says the world is not just your playground—you have some disciplinary stewardship looking after the health and vitality and the integrity of the enterprise that you are a part of,” Dess says.

Over the years, studies have shown that high-saccharin rats consume more of anything good that you give them. On the flip side, low-saccharin rats are more sensitive to the adulteration of something sweet with something bitter.

And what Dess and her colleagues have been doing over the last 15 years is pursuing three lines of inquiry: Are these individual differences in saccharin level related in anyway to the animal’s emotionality, including stress? (In a word, yes.) Second, do these high- and low-saccharin rats go about life provisioning themselves differently, and responding differently to metabolic threats? (“We, of course, would expect that they would.”) And lastly, does their willingness to consume saccharin in large amounts without restraint suggest a penchant for drug abuse?

Among their findings: When you sharply limit its food supply to one hour a day, a rat experiences depression-induced hyperacti­vity—which, in the case of the low-saccharin rat, averages about to about 11,000 running-wheel revolutions (or about seven miles) over a 24-hour period. “That’s a long way for a little animal to go,” Dess says.

Having published five papers just on taste, six on subjects other than taste, and six more on the psychopharmacology involved, Dess averages roughly a paper a year on her rat research alone. (She has authored more than three dozen peer-review articles, nine of which have Oxy students as co-authors.)

“One of the bum raps that science sometimes gets is that it’s really all confirmatory,” she says. While noting that the “hit rate” of Oxy’s research is pretty good, “We’ve had some big wrong predictions that we were pretty certain of that turned into really interesting things. … I also have benefited greatly in terms of balancing the risk with the certainty from being part of collaborations with people at other institutions.”

She points to the work that Marilyn Carroll, a professor of psychiatry at the University of Minnesota, was doing with regards to impulsivity and the behavioral characteristics related to drug use. “She was all set up to do drug administration,” Dess says, “so all we had to do is send her some rats.”

Marking the rodents’ tails—blue for high-saccharin, and red for low-saccharin—Dess shipped live rats to Minnesota about seven years ago. Carroll subsequently bred them, and now the university has the only other colony of low- and high-saccharin rats in existence. “Her graduate students and postdocs have been publishing really interesting studies,” says Dess.

Typically, there are around 200 rats living in laboratory housing at Oxy, in a former storage facility and recreational room converted some years ago by professor of psychology emeritus Dennis VanderWeele. After a study is completed, the rats who participated are given saccharin-intake tests, and the highest drinkers of the highs and lowest drinkers of the lows are selected for breeding. “Breeding is a treadmill,” Dess says. “We’ve always got more in the pipeline.”

Thirty-three generations removed from Milo, is there an end to the high- and low-saccharin rat studies in sight? “I try to never say never, but I try to never say always,” Dess says. “There are still things we want to know. Right now we have one tantalizing and frustrating puzzle that we’re working on”—an experiment studying sugar addiction in rats that springs out of a series of studies conducted by Veronica Yakenveno ’09, a psychology major from Odessa, Ukraine—“and we have another dreamlike series of experiments that we’re following up where every experiment comes out cleanly and straight-forwardly”—a study on flavor-preference conditioning that may explain what makes people with a taste for alcohol drink more.

What is it about rats that makes them ideal for laboratory research? “I think there are multiple reasons, and practicality is a big one,” Dess says. “They are small, they are rapidly reproducing, they are hearty, and they have large litters. But there are other animals with some of those attributes that never quite caught on, like gerbils and hamsters.” One key distinction, she adds, is that rats are a domesticated species—hamsters and gerbils aren’t.

“It’s a pretty small percentage of people who are working with nonhuman animals at all,” Dess says. “The preferred species in psychology is human.”