High on a Peruvian mountain more than 4,000 miles from Oxy, Adrienne (Spivak) ’08 and husband Garrett Hostetler ’08 bring modern ideas to the practice of plant-based medicine

Each morning, Adrienne (Spivak) Hostetler ’08 and Garrett Hostetler ’08 eat breakfast with their community of 20 people, high on a mountain in rural Peru, and then everyone begins their service hours. Whether it’s cooking the meals, doing research in the laboratory, or going through plants and making medicine, each person has an assigned task for the day. Everyone has lunch together before resuming their work. In the evenings, they have reuniones, or meetings, which frequently run until midnight or later, sharing lessons from challenges faced that day. 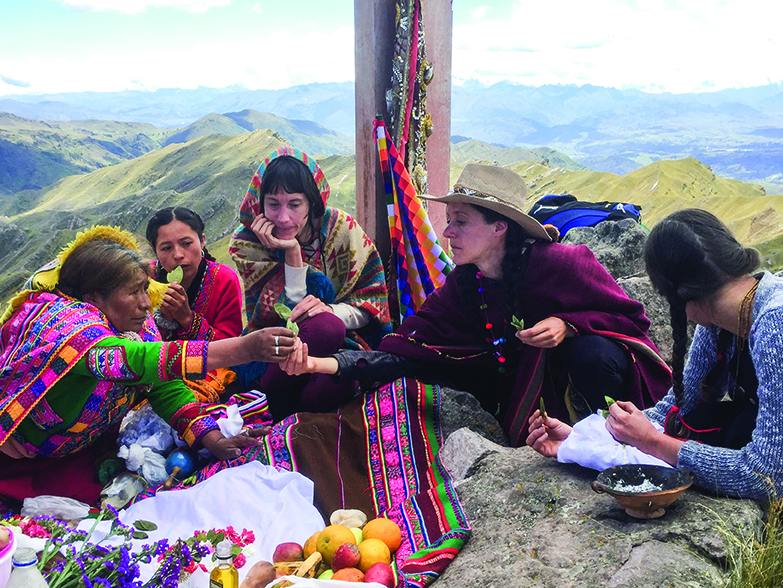 The community’s shared devotion to the interconnectedness of life prompted Adrienne and Garrett to establish the Asociación Rueda Sagrada, or Sacred Wheel Association. It’s a nonprofit organization based near Cusco, Peru, that promotes a natural way of life, emphasizing community, reciprocity, and collaboration.

In addition to studying plant-based medicine founded in ancient traditions to treat the whole body, the Hostetlers’ work focuses on providing educational programs to teach the practices and culture of the Andean people to both local people as well as visitors from around the world. “We take their philosophical vision of life and apply it in a practical way,” says Adrienne, who grew up in Denver and majored in art history and visual arts at Oxy. “Healthy living, natural medicine, agriculture, food, science, and arts are all aspects of a complete sense of life. We live in harmony with nature.”

Every great love story begins somewhere, and Adrienne and Garrett met by chance through a mutual friend about a month before graduation. Adrienne was weaving a Navajo wedding basket for an art class when she was introduced to Garrett, a biochemistry major from Gardnerville, Nev. Both played sports for all four years at Oxy—Adrienne as a soccer forward and Garrett as a football offensive lineman—“so we had many of the same friends, and somehow we did not meet until that day,” Garrett recalls. He kept Adrienne company as she went about her weaving, and the two talked well into the night. 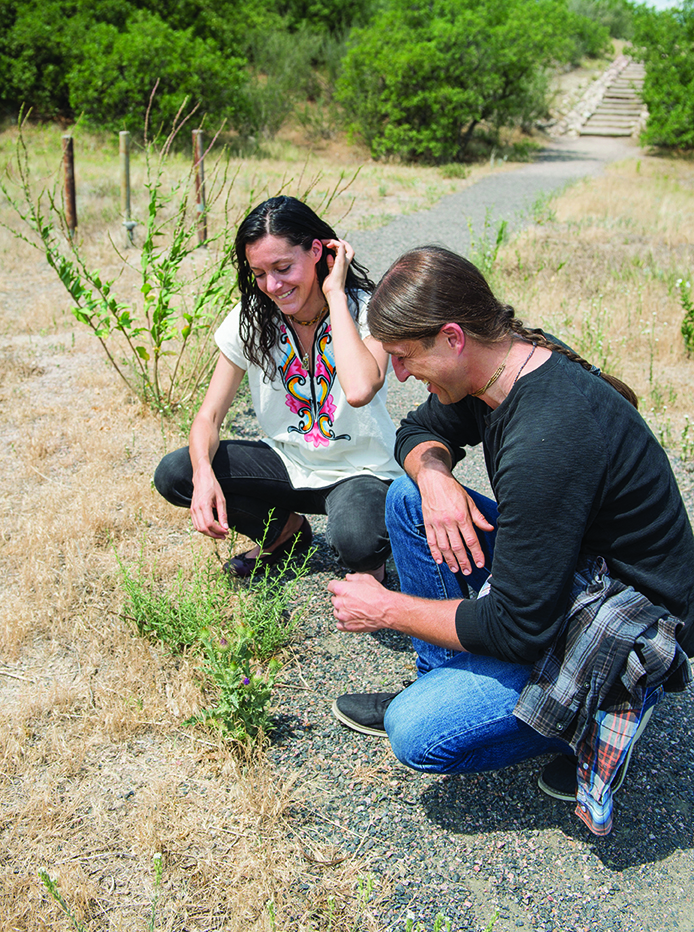 After they graduated, Garrett took a job as a biochemistry investigator and lab associate at a pharmaceutical company. Adrienne, meanwhile, worked a few unsatisfying jobs before she decided to hit the reset button. Feeling a calling to a more connected life, she sold all her possessions, bought a backpack and a one-way plane ticket, and left for South America in November 2009.

After her departure, Adrienne and Garrett weren’t sure they’d ever see each other again, but they wrote each other frequently, and Garrett got on a plane to visit her about six months later. “I had never been out of the country, so we decided to meet in Peru to see Machu Picchu and see where we were in our relationship,” he recalls. Less than a year later, Garrett—who had just been accepted into a Ph.D. program in the northwest—threw away his plans and moved to Peru, where the couple was married in 2013.

Integrated medicine is the focus of the research laboratory at Rueda Sagrada. Garrett says much of the work is cataloging and documenting the medicinal plants of the region as well as researching the locals’ understanding of the traditional healing power of plants and the dynamics of plants and the human body. They work to create different combinations of plants to treat various areas of the body in a holistic way.

“We integrate the ancestral vision while working with natural medicine makers, native healers, Ph.D. pharmacists, doctors, lots of modern science. It’s a collaborative laboratory, the first of its kind in the Andes,” Garrett says. “We work with the plant in wholeness, keeping the integrity of the plant. We can’t just take out a physical element. We integrate empirical data in discussions with pharmacists and medical doctors.”

To keep themselves tuned into their natural surroundings, the Hostetlers participate in traditional ceremonies. One of the most basic beliefs of the people of the Andes is their service and devotion to Mother Earth, named Pachamama. Considering that all humanity is one big family, Adrienne says, everyone must live in community to care for Pachamama together.

The traditional Andean community, known as ayllu in the Quechua language, is a self-sustaining unit typically made up of extended family groups. In the Hostetlers’ community, no one needs an outside job, and the organization doesn’t require donations to survive. They generate all the funding they need through their classes and workshops held in Taray and Cusco and by selling natural medicine and alimentation.

The ayllu is built upon the understanding that everyone is interconnected, a concept known as ayni, and that living in community requires working together and helping one another. “When someone needs to build a house, they all work together,” Adrienne says. “We don’t separate what’s good for me and what’s good for you. It’s a completely different economic system. Not capitalism or communism—it’s communal living. We exchange goods and services. If you put a monetary value on jobs, it creates a huge imbalance of life.” 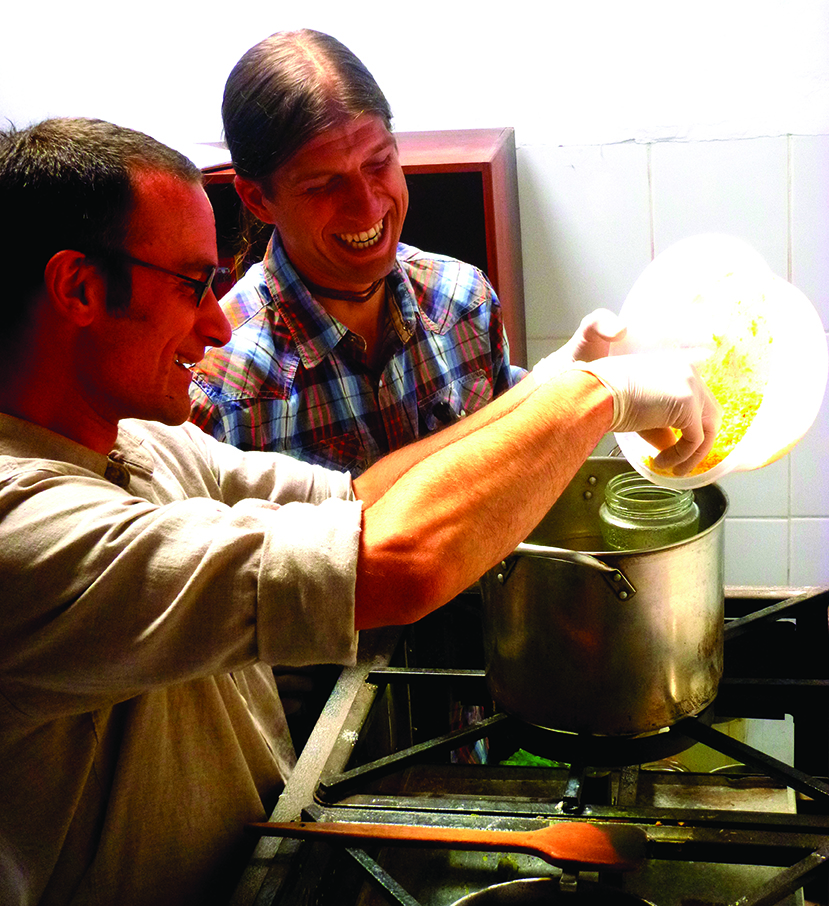 “Whoever is making the medicine and working with patients, they aren’t superior to the person who is growing the plants,” Garrett adds. “Every position adds value to the community.”

To maintain a self-sustaining society, the community must live simply. While “simple living”—adobe homes, spotty internet, dry toilets—was not too difficult of an adjustment for Adrienne, it was the “living in community” that was the hardest change for her when she moved to the small town of Taray in the Peruvian Andes.

“It was completely foreign to the way I grew up,” she admits. “I had to relearn everything. How do you live and work and be with the same people day in and day out? How do you deal with conflicts that come up? That was one of the biggest adjustments.”

In addition to their daily chores, the Hostetlers also have educational programs for people who come from all over the world to learn how to establish similar community projects in their own country. The couple does outreach, too—they were in North America and Europe over the summer sharing their traditional vision of life.

The next big project on the horizon is to open a holistic diagnostic and therapeutic clinic in the Sacred Valley. The goal for the clinic, Garrett says, is to provide personalized care to treat physical, emotional, and psychological health as well as diagnostics based on diet and traditional medicine. They’re already laying the groundwork and hope to have a pilot started by 2020, but bureaucracy in Peru moves slowly.

As they pursue that avenue, they continue to focus on sharing their way of life with the world—and connecting with the next generation of the Quechuan people. Garrett says community leaders are concerned about their children’s aspiration to the Western lifestyle and their lack of desire to pass down ancestral knowledge. As for the Hostetlers, they delight in learning Quechuan traditions, and they try to model the appreciation and application of those customs.

“Kids see it as going back in time,” says Garrett, who stresses that his work with traditional medicine integrates and complements modern science, rather than dismissing it. “It’s not going back to the past; it’s how this ancestral vision can apply to the modern day.”