The Path to Enrollment | Occidental College 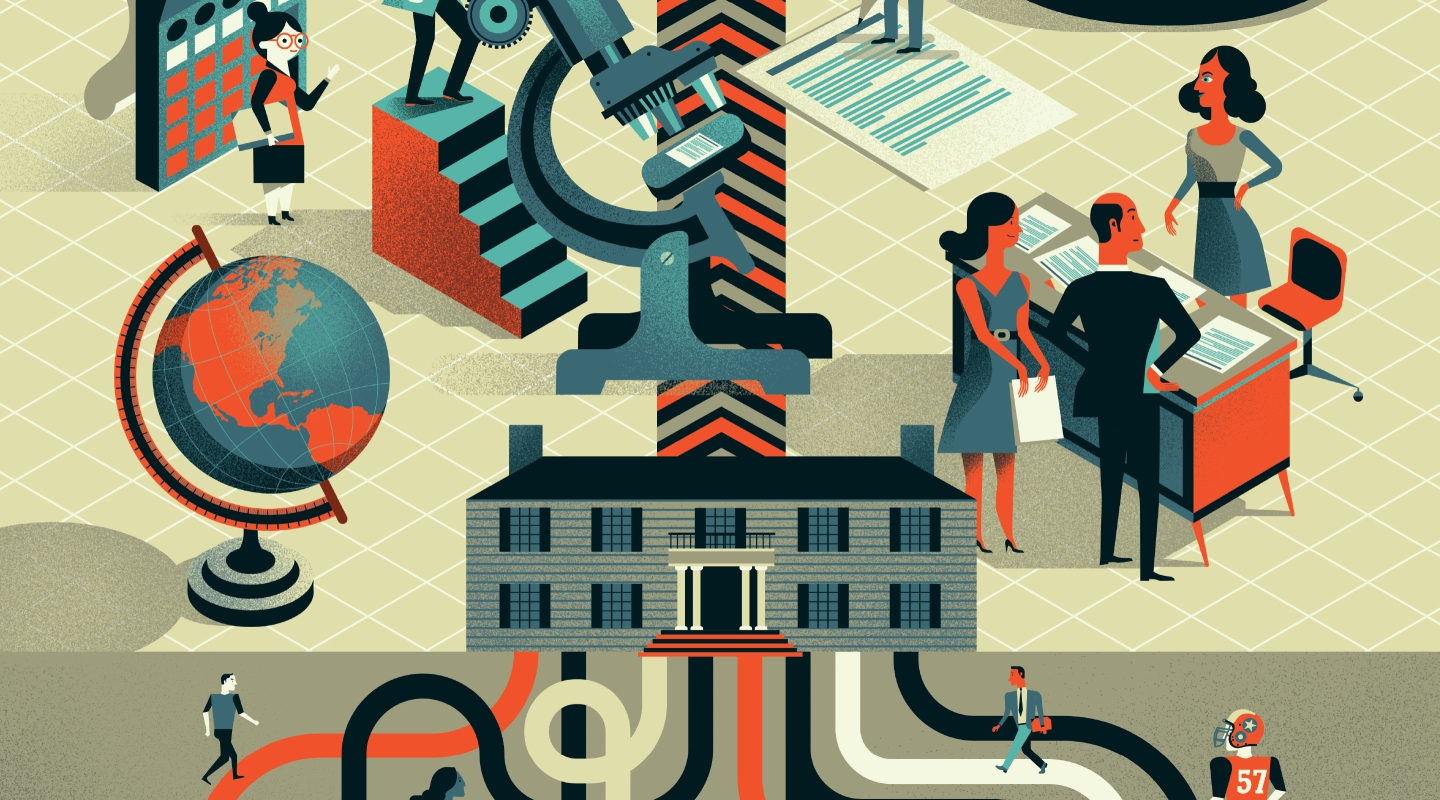 The Path to Enrollment

On the morning of March 12, news broke that federal prosecutors in Boston were accusing dozens of wealthy parents of participating in what the Los Angeles Times called “an audacious scheme to get their children into elite universities through fraud, bribes, and lies”—a story that immediately raised larger questions about the integrity of the college admission process.

Later that day, as her cellphone buzzed with messages about the investigation, Maricela Martinez, Oxy’s senior associate dean of admission, was interviewing finalists for the College’s prestigious Centennial Scholarship. One candidate started to cry, Martinez recalls, as she described how hard she had worked and how much her parents had sacrificed to give her the opportunity to attend college. “To her, the scandal was a reminder of the advantages others had and the obstacles she faced—and would continue to face—to be the first in her family to graduate from college,” Martinez says.

At the nexus of the investigation, dubbed Operation Varsity Blues, is disgraced college consultant William “Rick” Singer, who has admitted to rigging SAT and ACT scores, falsely representing his wealthy clients’ children as athletes, and bribing college officials to get them into top universities. Singer has yet to be sentenced after pleading guilty to a host of charges in March.

On November 6, The Wall Street Journal published a story about a small liberal arts college in Los Angeles that rebuffed Singer’s overtures in 2012—a school that “charted a different path” than those that seem to have yielded to the temptation to use backdoor strategies to attract affluent students.

That college, you may have heard, is Oxy.

“There are hundreds of admission offices and peers of ours across the country that do their work with a high degree of integrity, and Oxy is no exception,” says Vince Cuseo, Occidental’s vice president of enrollment and dean of admission since 2010 and a 20-year veteran of the admission office.

“I have never been asked to increase the applicant pool by x percent or selectivity by y percent, or told that I need to admit this wealthy family’s child,” Cuseo says, sitting in his office in Collins House, where thousands of prospective students and their families get their first impression of Occidental each year. “I like to think it reflects the culture of Oxy. I think we have been able to be successful over time while maintaining certain values and a level of integrity that is consistent with the College as a whole.” 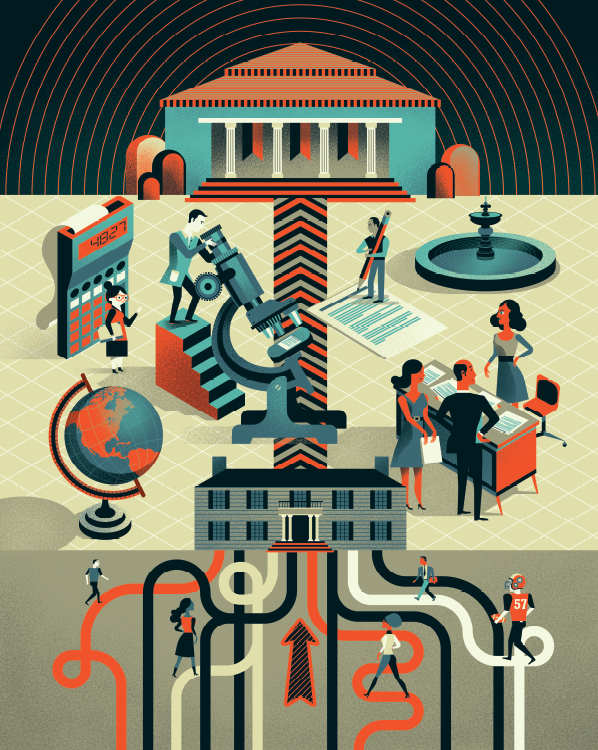 Since 1997, applications to Oxy have increased more than 300 percent. The 7,501 applications the College received for the Class of 2023 represent an all-time high, the result of a confluence of factors including Oxy’s strong academic reputation, its Los Angeles location, the international visibility bestowed by President Barack Obama ’83, and the rise of the web-based Common Application, which has boosted the number of students who apply to multiple schools.

At 37 percent, Oxy’s selectivity rate has never been lower—or student qualifications higher. “There’s a significant amount of self-selection that goes on in any college admission process, and we have benefited from the prevailing Oxy culture that consistently has attracted a high-achieving, intellectually curious, and diverse set of students,” Cuseo says.

In assembling each year’s class, he and his staff seek to balance three critical elements: academic quality; diversity, from racial and socioeconomic to geography, gender, and academic interests; and institutional budget concerns. “Our commitment to diversity

requires significant investment by the College,” Cuseo says. “We have to maintain a delicate balance in a tuition-dependent institution like Occidental and assemble each class in a way that addresses access and excellence and meets revenue targets for that year.” (Increasing the endowment to support financial aid is the top priority of the $225 million Oxy Campaign For Good.)

It’s a process that begins each September, when Cuseo and the other 11 admission officers hit the road to start recruiting next year’s class. “People usually think of someone standing behind a table at a college fair, but that’s usually not the case,” says Charlie Leizear, Oxy’s director of first-year admission. “The vast majority of our time is spent during the school day visiting from four to six high schools, meeting with students and counselors, and doing individual interviews in the evenings.”

Relationships with counselors loom large, as they are a key source of information for high school students deciding where to apply. “Singer advertised himself as an independent college consultant, but there are hundreds of others that are doing good work and not preying on student fears,” Leizear notes.

Admission officers also meet regularly with regional and national community-based organizations (CBOs) that work with underrepresented, first-generation, and low-income students to improve their chances of getting into college, says Martinez. Throughout the year CBOs bring groups of students to Oxy to tour the campus and meet with current Occidental students. “A significant number of our first-generation students have worked with a CBO,” she says.

In addition to meeting students at their high schools and in their hometowns, admission officers welcome over 15,000 guests to Occidental each year. “The campus visit is a critical piece of showcasing any college, but it is immediately clear to our guests that one of Oxy’s greatest draws is our dynamic and warm community,” says Chris Ferguson, associate vice president of enrollment. “Our enthusiastic cohort of student ambassadors gives tours, hosts students overnight, shares research and study abroad experiences, and even welcomes prospective students to join them for lunch.”

A short question on the application asks prospective students to reflect on what attracted them to apply to Occidental. “The No. 1 response is easily the warm reception that applicants felt from students and faculty when they visited campus,” Leizear says. “Applicants frequently share that Occidental stood out from other institutions because our tour guides in particular gave such authentic and candid insights into the Oxy student experience.”

Like many colleges and universities, Oxy licenses contact information of high school sophomores and juniors who have taken the PSAT or SAT from the College Board (a practice that was also the focus of a Wall Street Journal article in November). The purpose is not to artificially boost the number of applications but to help the College target certain geographic areas in another effort to identify underrepresented students.

“We’re not an institution that prides itself on how many people we can turn away,” Leizear says. “We don’t believe a single-digit admit rate is a good thing.” To more effectively reach rural and international students, Oxy also has been offering regular online information sessions.

On top of the College’s outreach efforts, the first time Oxy hears from a large portion of prospects is when they submit their application. “Hundreds of applications show up within 48 hours of the application deadline from students we’ve never met before,” says Leizear, who offers a handful of reasons why: “Occidental is highly ranked, people know the name in part because of the Obama connection, and we’re in Los Angeles.”

After the January application deadline, all those applications have to be read and evaluated in little more than two months. That’s a tall order at Oxy, because “about 85 percent of applications are read twice, and some more than that—the ones that fall more in the middle of the pool,” Leizear says. Applicants who fall into that category are usually discussed in a regular meeting of senior admission staff members.

To give applications the attention they deserve, Oxy—like many of its peers—hires seasonal readers, who give some applications their first reading. “We are identifying potential as much as we are assessing accomplishments, so we train everyone who reads applications on the nuances and biases present in assessing letters of recommendations, essays, and standardized test scores,” Leizear says. Building on that training, each admission officer is assigned a specific region of the United States or the world, which enables them to become experts in assessing the rigor of high schools, coursework, and transcripts from those regions.

To get his clients’ children into college, Singer took advantage of the special treatment athletes and wealthy donors can get in the admission process—what he referred to as “side doors.” (The Journal article details a 2012 attempt by Singer to get Occidental to reconsider “an application from an academically challenged daughter of a wealthy family.” Cuseo flatly replied, “No.”)

At Oxy, everyone has to come through the front door, admission staff and coaches say. While the vast majority of student-athletes who compete for Oxy are recruited in some fashion, “We don’t have slots reserved for athletes,” said Colm McFeely, head women’s soccer coach and assistant director of athletics, who has worked at Oxy since 1992. “They are students first, and athletes second.” It’s possible to do both well, he adds, pointing to goalie Sydney Tomlinson ’19, an All-American selection and biochemistry major who graduated Phi Beta Kappa.

As for the children of donors or potential donors, “Family wealth is not a factor when we make admission decisions,” President Jonathan Veitch says. The College is sometimes aware of the giving potential of some applicants’ families, and those families may be engaged after their student enrolls at Oxy. “But it has long been Occidental’s practice to disregard giving potential when considering students for admission,” Veitch says. “Without a clear bright line, the ethics of the admission process would be hopelessly compromised.”

With college admissions under scrutiny, preferential treatment for the children of alumni, or legacies, also has come under fire. Fueling the criticism is a National Bureau of Economic Research study that found that 42 percent of white students admitted to Harvard between 2014 and 2019 were athletes, legacies, or children of potential donors. In contrast, over the last six years at Oxy 18 percent of admitted white applicants were recruited student-athletes or legacies.

The most common legacy students at Oxy are the siblings of current students and recent alumni, rather than children of alumni. “We do flag legacies, but in the end it has a very modest influence on the ultimate decision in those cases where all else is equal,” Cuseo says.

“When you have a holistic admission process that is not formulaic, as we do, you will always have people who are critical of the way you render your decisions,” he adds. “Still, we have tried to be scrupulously consistent and transparent in the way we have rendered our decisions over the last 20 years.” The fevered anxiety about college admission that Singer preyed upon, he says, “seems removed from the day-to-day of our admission process.”