Their Time to Ride | Occidental College 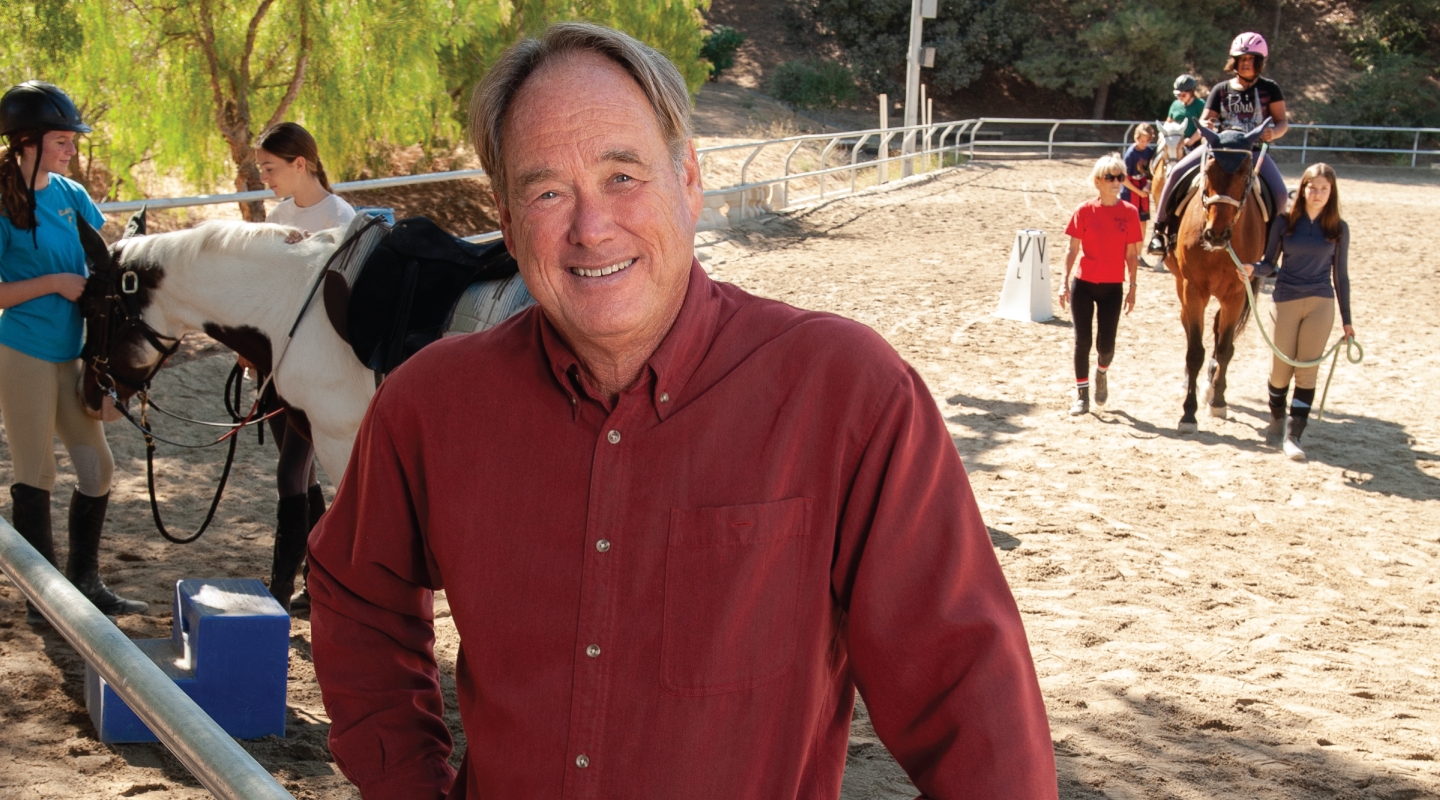 Their Time to Ride

Thirty-five years ago, Bryan McQueeney ’80 was on a date with riding instructor Gloria Hamblin when he was introduced to the world of hippotherapy—the use of horseback riding as a therapeutic treatment. “I went out on a beautiful clear Saturday morning to this ranch out in the hills in the San Fernando Valley and I just saw this universe of people helping others,” he remembers. “And it spoke to me, because I’m here all these years later.” 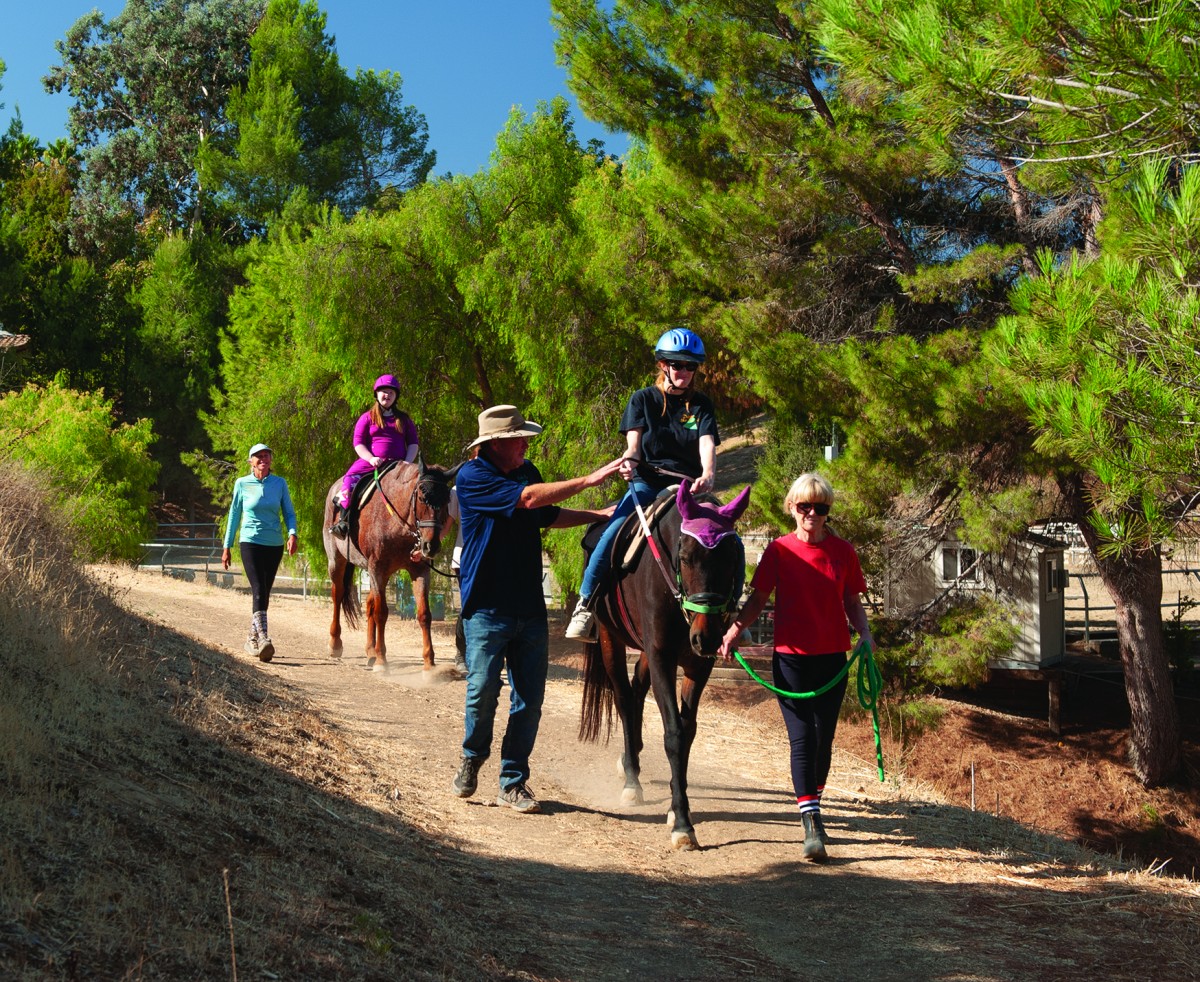 In 1985, McQueeney married Hamblin, who holds a bachelor’s degree in recreational therapy from Cal State Northridge and has worked with the physically and developmentally disabled throughout her career. And in 1994, the couple co-founded Ride On Therapeutic Horsemanship, which teaches riding skills to children and adults with mental and physical disabilities and uses the movement of the horse to improve a host of medical conditions through occupational and physical therapy.

With a staff of nine certified instructors, six therapists, and 30 horses, Ride On works with approximately 240 riders a week and has given more than 120,000 lessons over its 25-year history. “They have the same dreams and aspirations that you or I have,” says McQueeney, who worked as a technical writer prior to becoming Ride On’s full-time CEO in 2000. “If you get on a horse, you feel power, control, like you’re on top of the world. These are all metaphors our riders might feel, too. They just don’t have the ability to go out and do it on their own.”

While riding may evoke images of galloping to many, quiet steps can make all the difference with Ride On’s clientele. Working with young kids who may have problems walking, McQueeney says, “You may not be able to put them on a treadmill to walk but you put them on a horse and the horse walks for them. A horse can take 1,000 steps and each step can strengthen their core and neck. Obviously steps have to be taken to make sure it’s safe, appropriate, therapeutic, and effective but that’s part of what we do.”

The path to sustaining a nonprofit with a $1 million annual operating budget is not an easy one, even for a seasoned executive like McQueeney. “Finding clients is not the problem,” he says. “The issue is getting the staff, facility, horses, volunteers, and funding to support it.”

“You have to have a plan to keep going and somehow figure out what will work,” says Hamblin, who serves as Ride On’s program director. “Bryan’s the guy who does that—planning ahead. He’s amazing.” 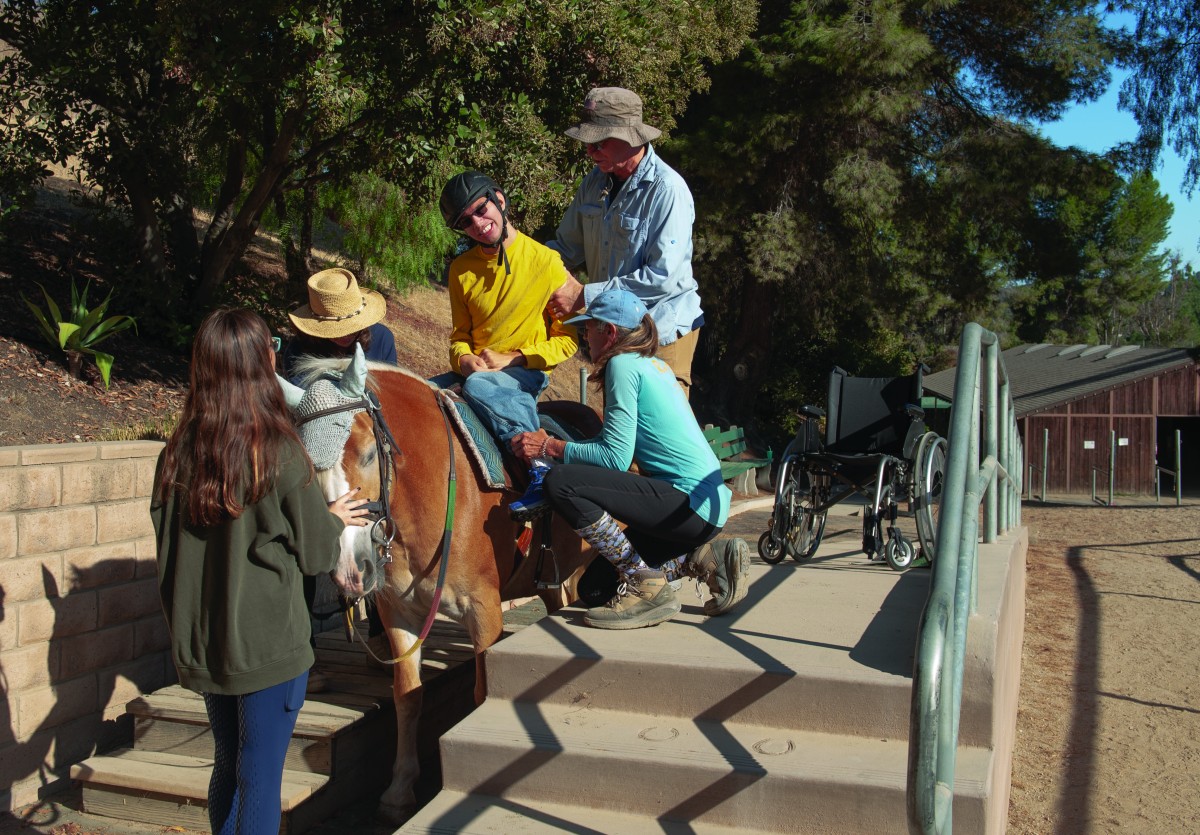 Therapeutic riding dates back more than half a century, prompting the formation in 1969 of the North American Riding for the Handicapped Association (today known as the Professional Association of Therapeutic Horsemanship International). Ride On is among the largest of 873 PATH-certified member centers worldwide, which collectively work with about 69,000 children and adults each year.

The organization was born out of necessity in 1994, when the nonprofit teaching adaptive riding program where Hamblin was working as head instructor closed down. “Gloria had all her clients and no way to serve them, so we decided to open Ride On,” McQueeney says. “The first lessons were at a borrowed arena with horses ridden in from five area ranches by volunteers.”

Soon after, Ride On found a permanent home on a three-acre ranch in Chatsworth. “I had just finished designing and building our house and, after the Northridge earthquake, had to spend some more time fixing things,” McQueeney says. (Seven years later, the Conejo Recreation and Park District offered a 40-year lease on the Walnut Grove Equestrian Center in Newbury Park at a cost of $40 per year.)

In addition to offering nearly 40 varieties of programs, Ride On was among a handful of centers in the country selected by Columbia University to participate in a study for the Man O’ War Project, which examines the efficacy of equine-assisted therapy in treating veterans with PTSD, according to McQueeney. 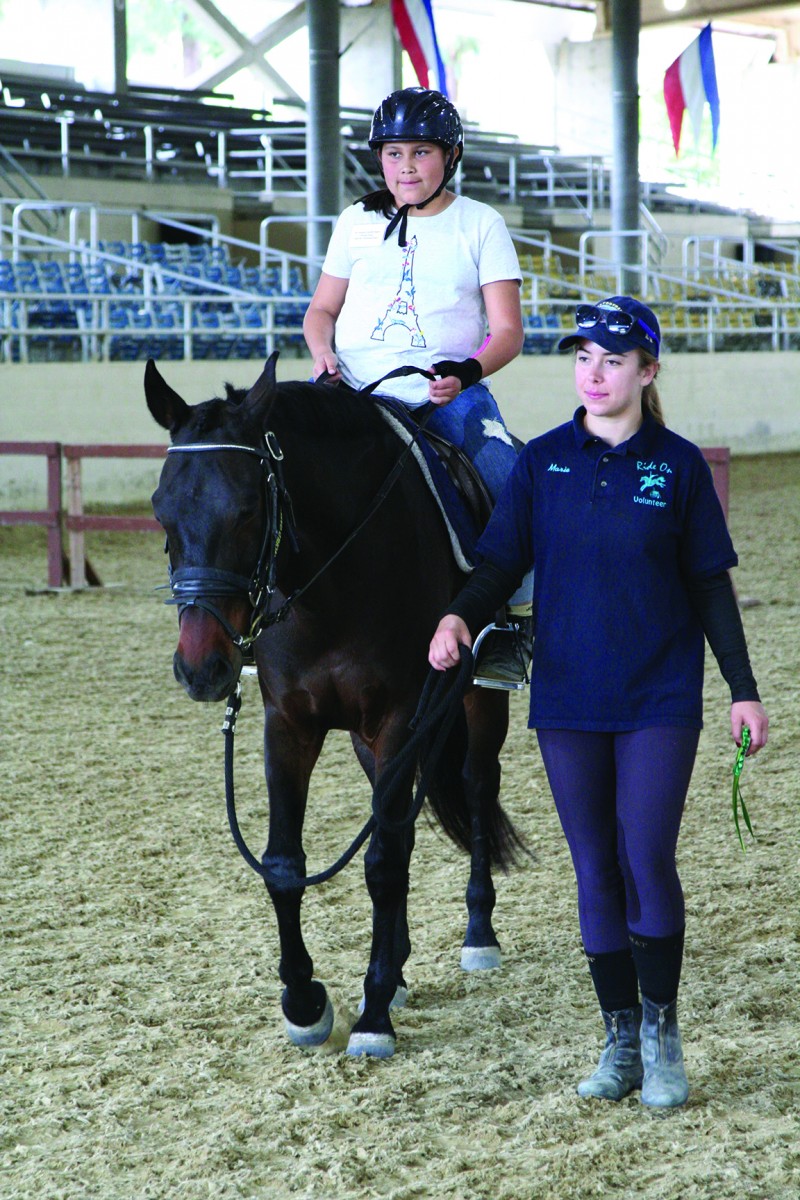 Each May, Ride On also puts on the CALNET Show for more than 130 riders with disabilities, with competitions ranging from trail to dressage. The event takes place at the Los Angeles Equestrian Center, as did the 2015 Special Olympics World Games Equine Competition. With McQueeney as competition manager, Ride On was charged with finding 85 horses suitable for 123 athletes, ages 11 to 60, hailing from 35 countries, speaking 16 languages, and competing in four disciplines.

“None of our athletes had a horse so we had to find the horses that were safe and appropriate for international competition,” McQueeney recalls. They wound up with a team of roughly 100 people to manage the competition and the event was a rousing success. “You work so hard so these athletes can get their due,” he says. “That they can enjoy something that is rare for any of us—to be celebrated.”

In 1998, McQueeney’s daughter, Megan—who participated in the 2015 World Games as a PATH-certified advanced instructor alongside Hamblin—became temporarily paralyzed following a bone infection in her hip. “She went from healthy to paralyzed overnight,” McQueeney recalls. As she relearned how to walk—a process that took three months—Megan utilized the Chatsworth stable as a rider, eventually recovering completely.

“I gained a deep appreciation for parents who have to juggle life when a child becomes seriously ill,” McQueeney says of the experience. “Many of our families manage illness over a lifetime; we were lucky that Megan recovered completely. When we started Ride On we had no conception that we would one day need it and benefit from it.”

As a political science major at Occidental, McQueeney found a mentor in Roger Boesche, who joined the faculty as an assistant professor during his sophomore year. “Roger was the first professor who saw something in me, and it was his faith in my ability that inspired me to do better,” he says. “I loved being challenged and challenging others.”

In addition to his major, he was also close to having enough credits for an economics minor. “Economics gave you a prescriptive understanding of how you should behave and see the real world,” he says. That understanding has helped him navigate many a monetary storm, from the financial crisis of the previous decade to the inevitable loss of a portion of benefactors who develop other interests.

Ride On has a four-legged financial approach: donations, special events, grants and fee for service. And each accounts for roughly one quarter of the funding, he says, which helps to reduce the risk from a downturn in any one of them. 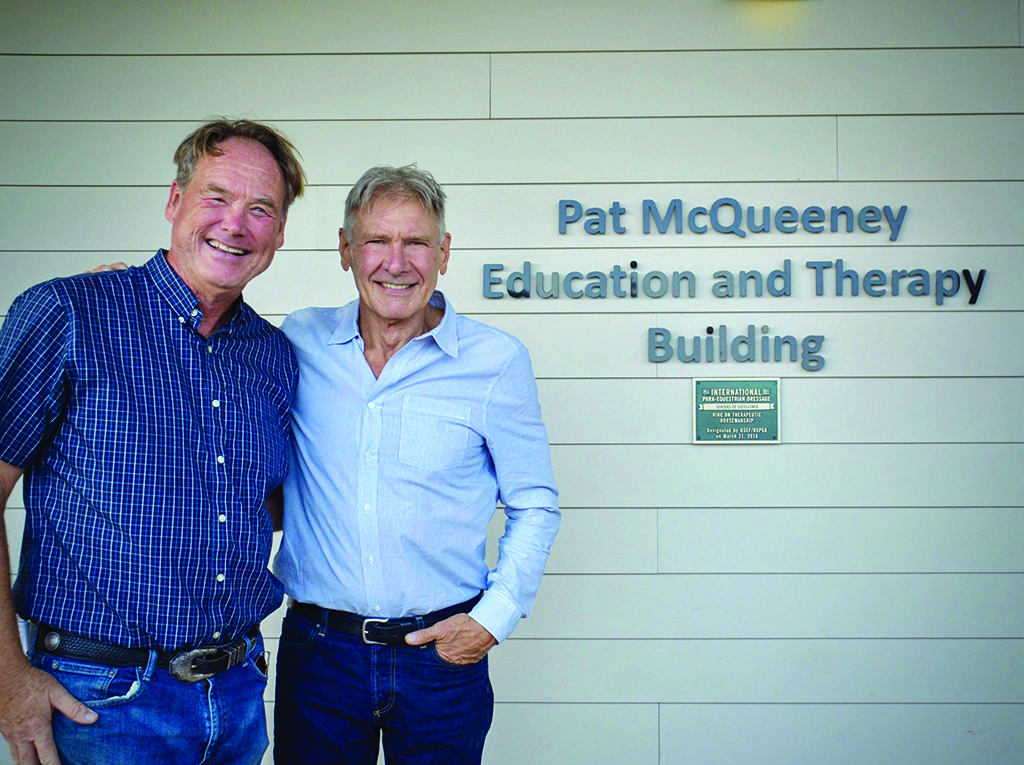 Ride On marked its 25th anniversary with its annual fundraiser at its Chatsworth ranch. The event raised nearly $180,000 and drew around 300 people, including longtime supporter Harrison Ford. (McQueeney’s mother, agent and manager Pat McQueeney, met Ford in 1970 and represented him until her death in 2005.) Hollywood notables such as Ellen DeGeneres and Kaley Cuoco have been generously with their time at past events.

McQueeney credits much of the success of Ride On to his wife, as he didn’t have much experience with horses growing up. “Gloria’s mother was a rehab nurse and that’s how she got interested in rehab,” he says. “She always had what I call the ‘horse gene,’” he adds with a laugh. “There’s a certain class of human beings who love horses and would be happy to be around them all day.”

After nearly 20 years in the saddle as CEO, McQueeney isn’t riding off into the sunset just yet, but he understands the importance of knowing when to hand over the reins. “The founders’ classic scenario for nonprofits is that they tend to be very controlling and afraid to let go,” he says. “Our theory always was in opposition to that. The more you include an independent board or an empowered board, the broader your base of support and the further you can go as an organization.”

When he needs to get away, McQueeney often turns to his horse, Luke—half draft, half palomino—whom he loves to take for a ride on a sunny Southern California day. But today he’ll stay inside so others can have their day in the sun.

Eric Butterman is a freelance writer based in McKinney, Texas. Photo by Kevin Burke.