The Joys of Summer | Occidental College 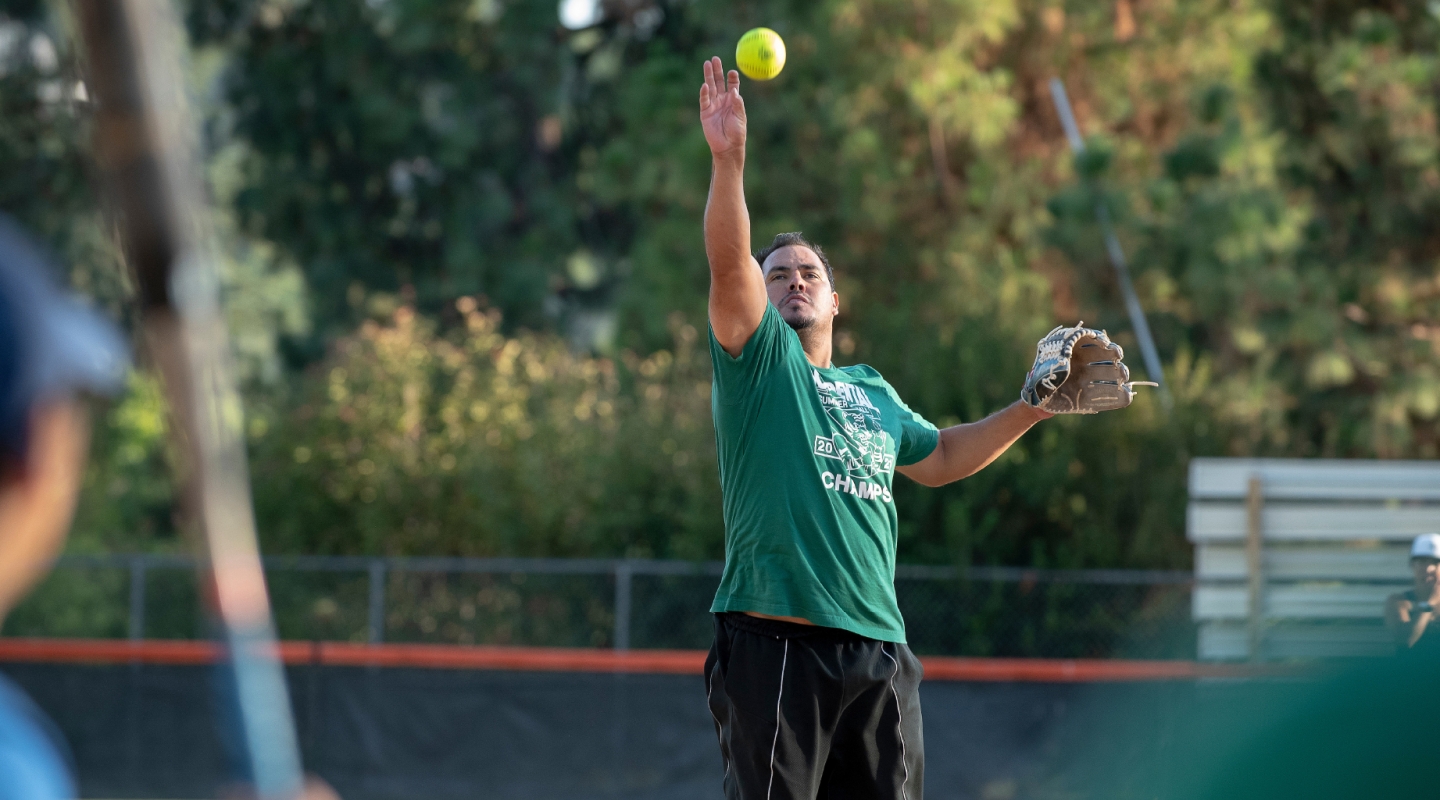 The Joys of Summer

For 26 seasons, Oxy’s Summer Staff Softball League has served up friendly competition (and the occasional cold beverage) for employees and alumni

To the casual softball fan, this contest had it all. There was a keg of beer and a wine-and-beverage selection catered by Dining Services. There was the promise of an epic showdown between two storied franchises: an upstart, patchwork crew (Beer Battered) whose defensive prowess carried them to the title game with upset-minded swagger; and a veteran squad (Los Amigos) who blasted through the season without a loss. 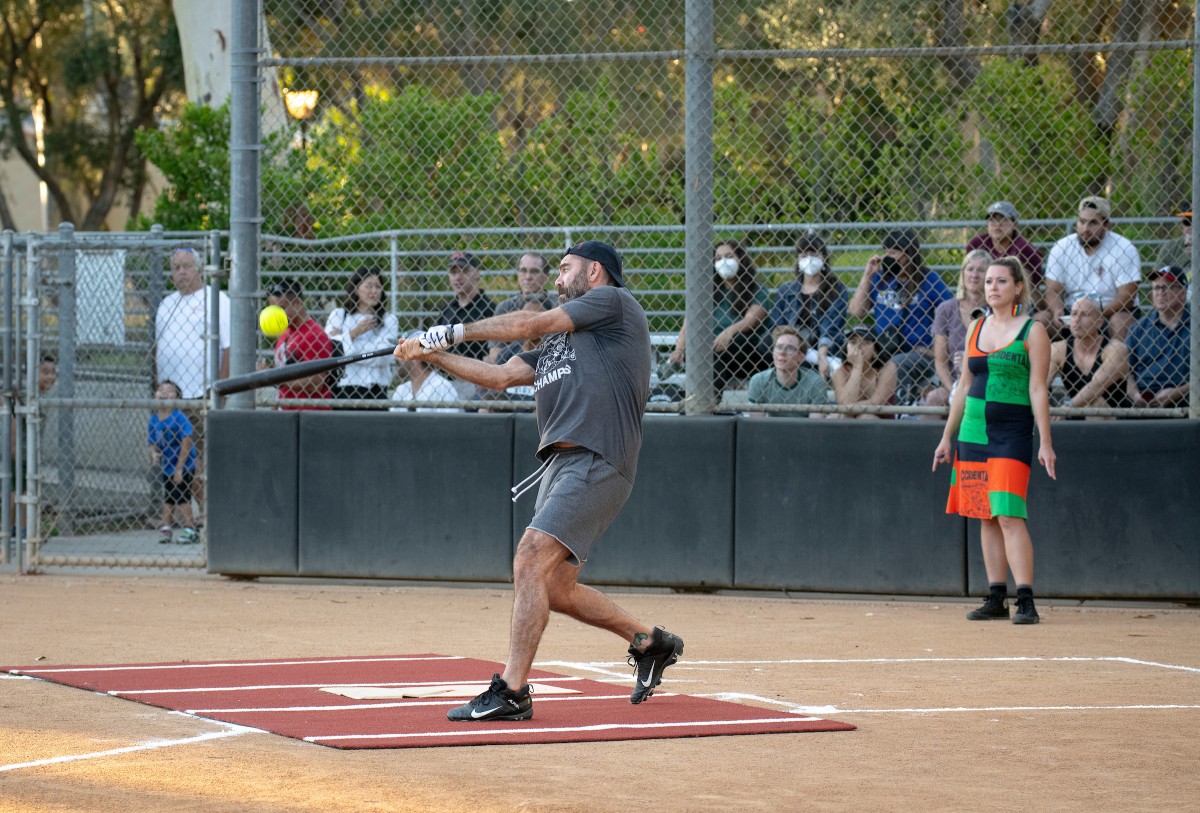 The only thing missing from the Summer Staff Softball League (SSSL) championship was a first aid kit. But when a player for Los Amigos had a tiny cut that briefly stopped the action on August 18, Beer Battered came to their arch-rivals’ rescue with a spare Band-Aid—and the game went on.

That simple adhesive gesture reflects the spirit of SSSL, which typically brings six teams into competition. There’s no trophy at stake, only bragging rights—along with a brightly colored T-shirt emblazoned with the word “Champs.”

Registrar Jim Herr ’86, who served many years as league commissioner, traces the roots of SSSL back to an employee in the Office of Institutional Advancement, who had assembled a team of Tigers to play in a softball league in Pasadena. Seizing upon the interest that the team generated across campus, he got the seed money from College administrators (to cover the cost of an occasional broken windshield as well)—and Oxy Summer Staff Softball took to Bell Field in 1996. 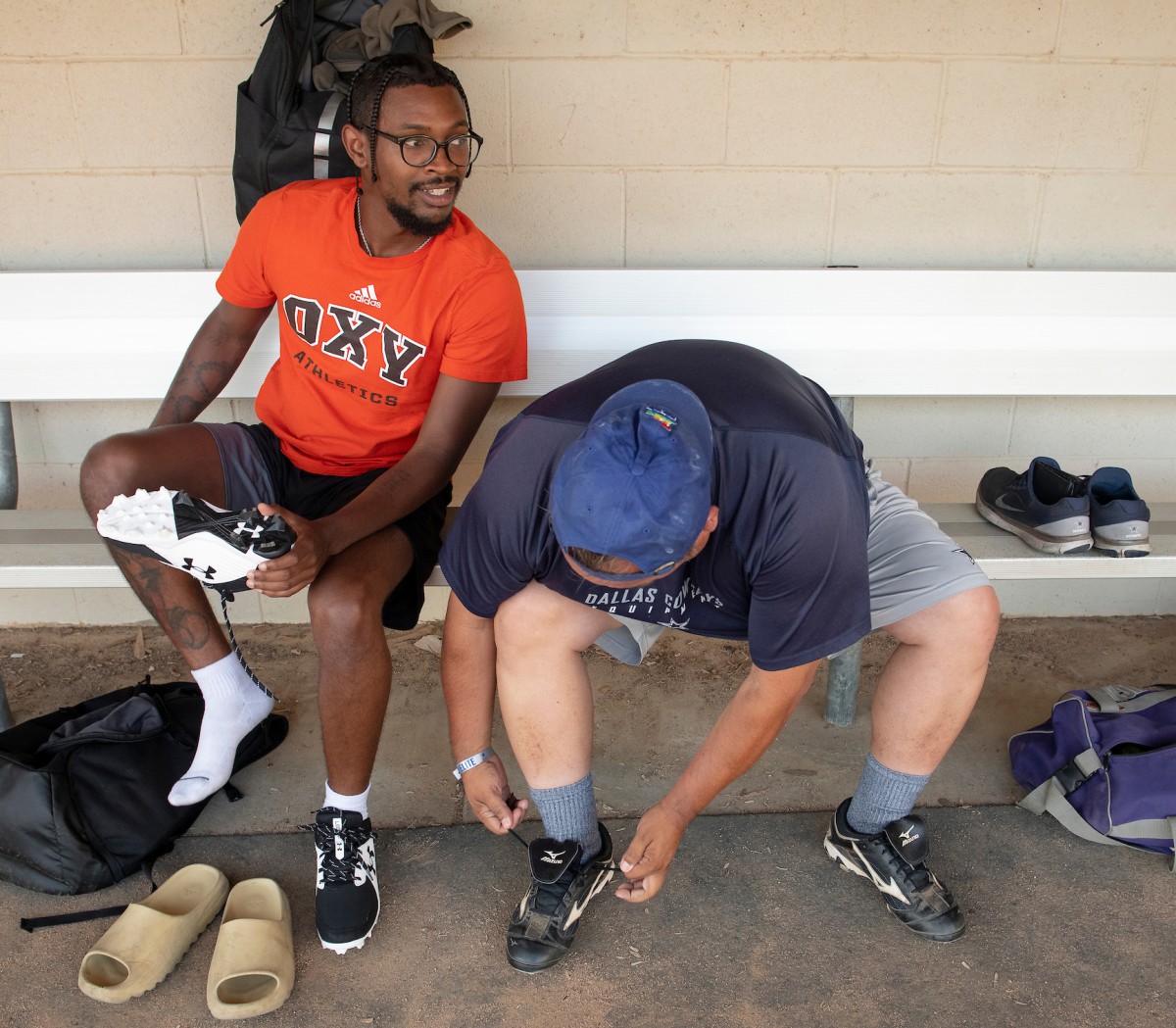 “Most of our teammates knew each other from working together and interacting from that perspective, but the league gave people an opportunity to interact with other employees across campus whom they wouldn’t ordinarily come into contact with,” Herr says. “At various times, teams would bring food and drink and maybe even cook out after the game—and sometimes they’d invite the other team to join them.”

Legendary umpire Joe Conte, an Eagle Rock High School alumnus, helped set the tenor for the league. “Joe understood what we were doing there,” Herr says. (Conte died of cancer in 2012.) “While any kind of game is going to be competitive, we didn’t want the competition to dominate, because when you have strong feelings about calls made on the field, things can get a little heated—and we certainly didn’t want that.” 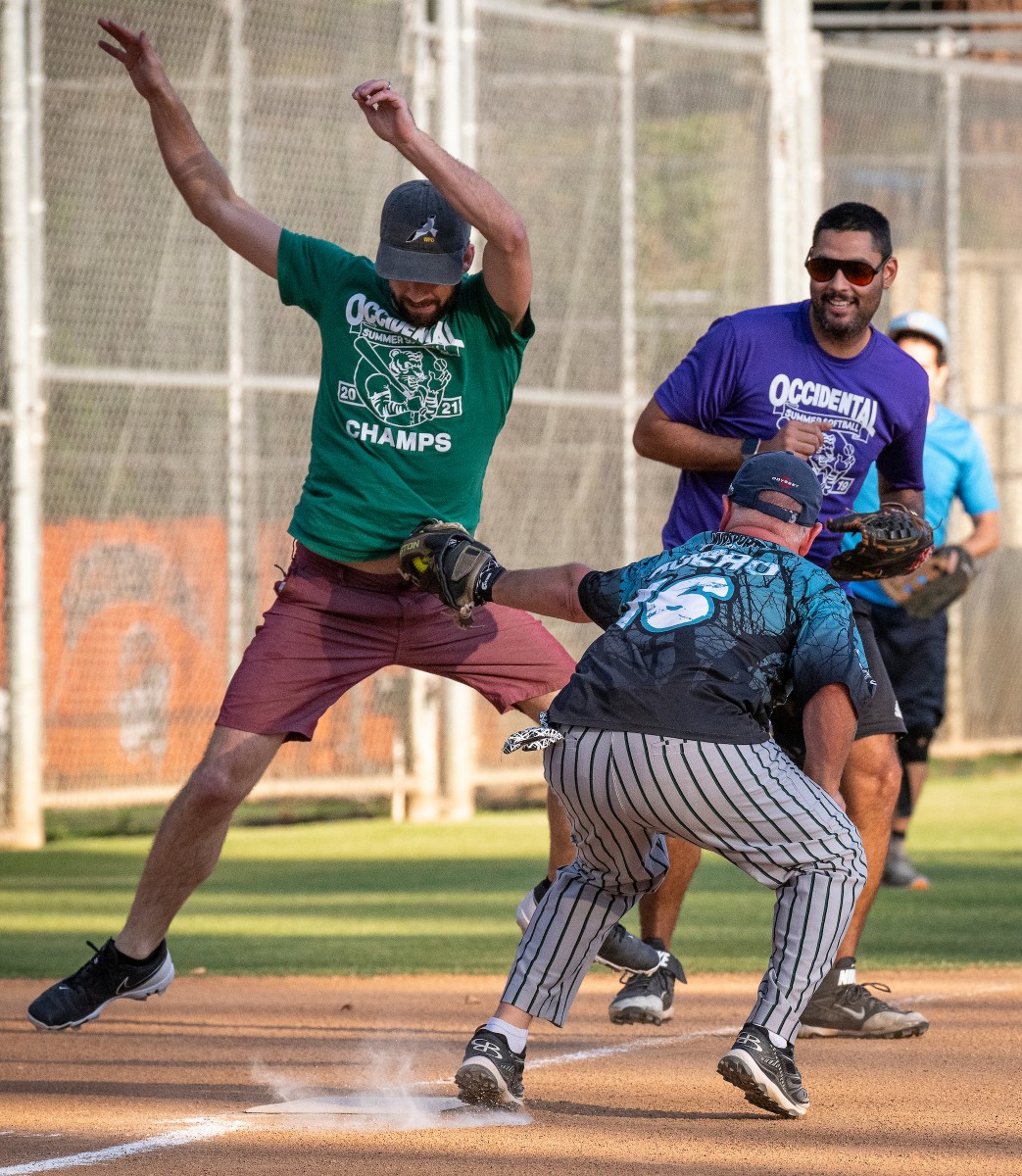 “The competition is there, but it’s at just the right level,” says Michael Garcia ’79, who has played for Los Amigos since the dawn of the league. “We’ve seen our kids grow up playing here,” adds founding teammate Angel Navarro ’87. “It keeps me connected to Oxy.”

In the big game, Beer Battered batted around in the top of the first, stringing together a succession of singles and doubles that added up to a 5-0 lead. Their lead was 6-0 in the third before Los Amigos’ bats came to life. A three-run homer in the bottom of the third put the defending champs on the scoreboard—around the time that the crowd finished off the keg. (“Goals met,” umpire and co-commissioner Courtney Stricklin Burgan ’03 joked between innings.) In the bottom of the fourth, a two-run double and a fielding error evened the score; a couple of hitters later, Los Amigos went ahead, 9-6.

Trailing by five going into the seventh and final inning, Beer Battered made it close—but Los Amigos held on, capping a perfect season with an 13-11 comeback win for their third consecutive title and 12th overall. (For those out there keeping score, Beer Battered [formerly Bat Boys/Athletics] has four titles; Campus Dining and Underdogs, three apiece; Enforcers, two; and Leftovers and Magnetic Fielders, one each.) 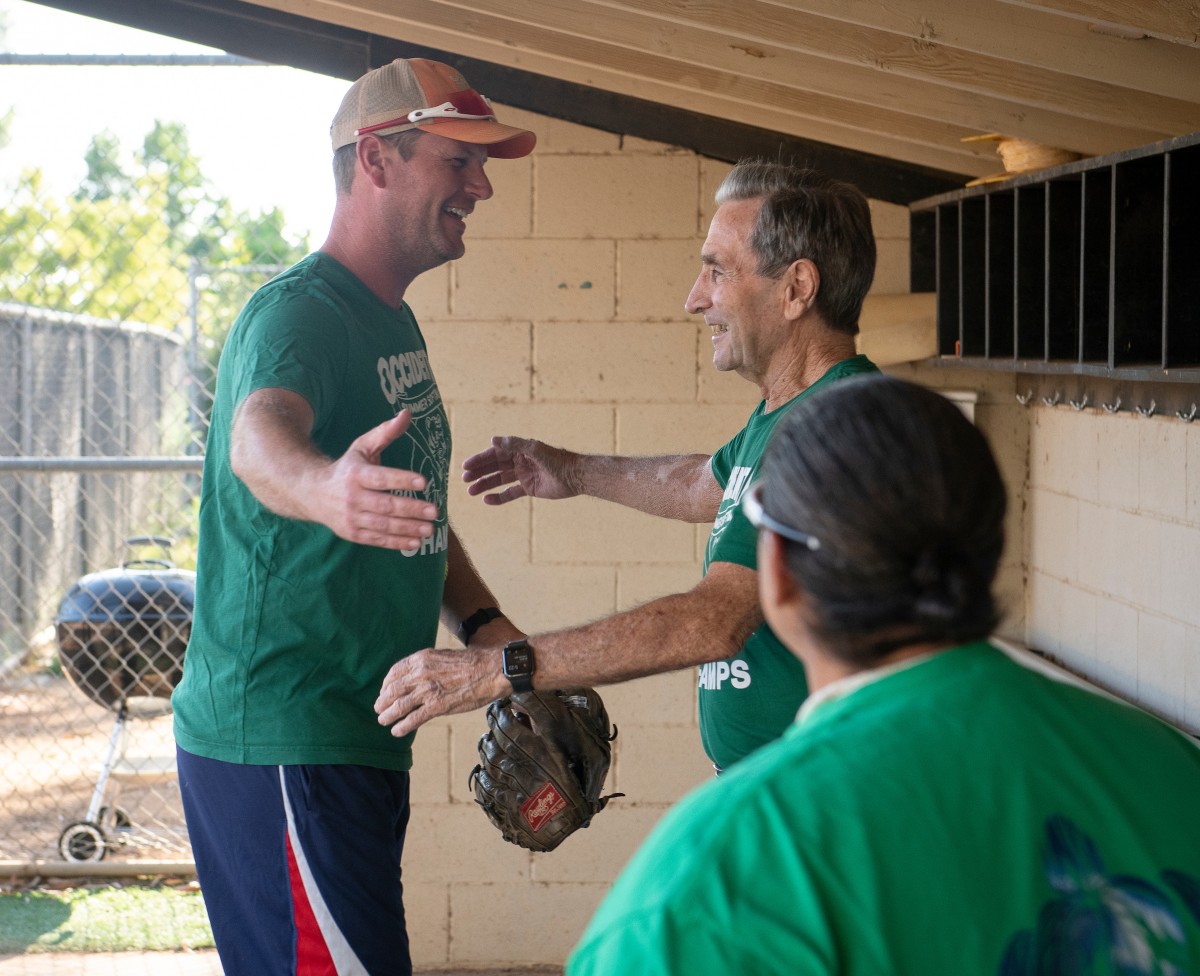 “The league has been a real asset to this campus,” says Los Amigos member and Professor of Sociology Emeritus Mike McAleenan, who hung up his spikes at age 85 after 73 years of organized ball. “Alma has kept the team together amazingly well,” he adds of manager Alma Olmos Garcia ’81, an All-SCIAC basketball player for Oxy.

Los Amigos pitcher Freddy Hernandez, who joined the team about a decade ago after watching wife Kelli ’08 from the bleachers, summed up the SSSL philosophy before taking the mound: “Whoever wins, wins … I’m out here with these amazing people.”

All Oxy employees, alumni, and their immediate family members are welcome to play in the league. For more information, contact Courtney Stricklin Burgan ’03.)