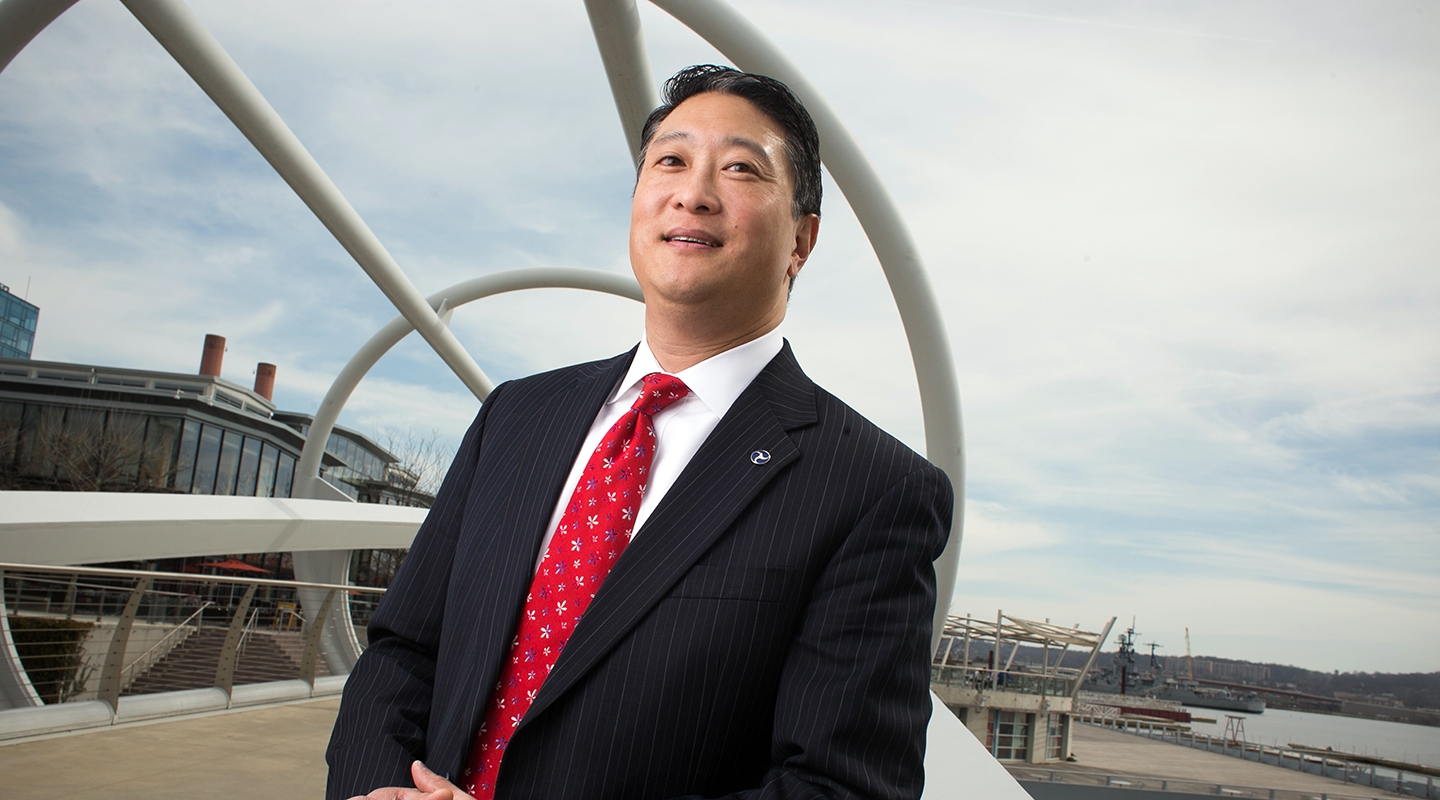 Because it's one of those questions that comes with the territory, David Kim '85 is asked to name his favorite American thoroughfare. "Primarily for nostalgic reasons, it's Interstate 5 between Northern California and Southern California," says the Federal Highway Administration's new deputy administrator, who grew up in Davis. "I drove that stretch so many times during college. There's something about the setting that I found peaceful in a way. It felt like you were away from the hustle and bustle."

It's that hustle and bustle, with its attendant congestion, that Kim hopes to curtail on the nation's 3.9-million-mile highway network. The respected Texas Transportation Institute reported last year that congestion costs $160 billion annually in lost productivity, extra gas expenses, and wear on vehicles. And while SoCal highways are notoriously gridlocked, "You're starting to see congestion in places that didn't have it before," says Kim, who was appointed as the agency's second-in-command (under Gregory G. Nadeau) in February by President Barack Obama '83.

The 2,800-person FHWA works with the government to improve mobility through the development of better interchanges and freeway ramps, and shares data on topics such as carpool lanes and transportation alternatives including walking and bicycling.

A political science major, Kim notes that the liberal arts framework is conducive to his current role, which involves "thinking, analyzing, speaking, reading, and writing—and doing these things well in a fast-paced work environment." Kim originally planned to attend a school in the UC system, "but the idea of going to college in Los Angeles intrigued me," he says. "Having grown up in a small town, I wanted to experience a completely different kind of environment, and L.A. offered just that."

As a student, Kim belonged to the Occidental College Democrats, the Asian Alliance cultural club, and wrote for the Occidental Weekly for a stint. He attended campus rallies and demonstrations protesting South Africa's apartheid government, while also urging the College to divest from businesses with ties to the nation.

While at Oxy, Kim became friends with Joe Krovoza '85, a diplomacy and world affairs major who, in what Kim calls a "neat coincidence," has spent the last 20 years at UC Davis' Institute of Transportation Studies & Energy Efficiency Center. (Interestingly, neither man expressed an interest in the field during their time at Oxy.)

"David blends a calm and thoughtful approach with just the right amount of impatience to make things right," says Krovoza, the institute's senior director of development, who also served as mayor of Davis from 2011 to 2014. "David and I have some sort of trading-places, parallel-universe thing going on," he adds. "We keep crossing paths in transportation policy from opposite sides of the country."

Both Kim and Krovoza came to appreciate the scope and depth of transportation as a policy concern. "I found it to be one of the very few issues that impacts everyone's life, no matter who you are or where you live," Kim says. "You need to have great cooperation and partnership between all three levels of government—local, state, and federal—in order to make transportation programs and initiatives work effectively on the ground."

After graduating from Oxy, Kim spent more than five years in the Hollywood office of California State Sen. David Roberti. That's when he began to tackle transportation issues (as talk of a proposed rail system through the area was creating political ferment). "I became fascinated by the politics of transportation, but also the technical aspects, whether it be engineering, planning, design, or funding," Kim says. "How do you generate the right kind of political support to make sure you have the proper resources?"

While working for Xavier Becerra, the California state assemblyman turned congressman, Kim completed a master's in public administration at USC. He went on to hold senior positions with former California Gov. Gray Davis, the Office of the U.S. Trade Representative, and the city of Los Angeles. In 2009 he joined the FHWA, a division of the U.S. Department of Transportation.

These days, Kim lives in Fairfax County, Va., with his wife, Julie, and children Tessa and Jaisohn. Considering his job, it's not hard for him to appreciate highways as metaphors for American individualism, and as a source for decades of songs extolling the freedom of the open road. Kim often made his I-5 sojourns with an Oxy classmate in the passenger seat of his 1976 VW Dasher, testing the speed limit as Rush's "Tom Sawyer" blasted on the stereo:

No, his mind is not for rent
To any God or government
Always hopeful yet discontent
He knows changes aren't permanent
But change is

"Somehow that song personified the I-5 experience," he says. "Those were some memorable trips."

Andy Faught wrote "Heart Like a Wheel" in the Winter magazine.