Decades before they joined the diplomacy and world affairs faculty at Oxy, Sophal Ear, Lan Chu, and Sanjeev Khagram immigrated to the United States as refugees. How have their journeys informed their scholarship?

By Samantha B. Bonar '90 | Photos by Kevin Burke

Associate professor of diplomacy and world affairs Sophal Ear was born in Cambodia in 1974, right before the Khmer Rouge took over the country in April 1975. The group killed a quarter of the population—1.7 million people. On the third day of travel trying to escape Cambodia, Ear's father died of dysentery. A brother adopted by his aunt is still missing to this day.

Ear and his DWA colleagues Lan Chu and Sanjeev Khagram shared their experiences immigrating to America in a talk titled "Intimate Journeys, Refugee Stories" in Johnson Hall on February 14, part of a United Nations Week built around the theme "Through Refugee Eyes."

"The overriding principle of citizenship is equality in political participation," says Ear, who joined the Oxy faculty in 2014. "Refugees become Americans, and they have every right to be here, period."

When the Khmer Rouge announced in late 1975 that Vietnamese citizens would be returned to Vietnam, Ear's mother, Cam Youk Lim—who spoke a bit of Vietnamese—declared herself and her five children Vietnamese. She was later tested by the Khmer Rouge and the Vietnamese for her language ability. Her Vietnamese was very bad, "but a kind Vietnamese lady tutored her for three days like a drill sergeant, and Mom passed," Ear says.

That was in early 1976, when Vietnam was communist "and only marginally better than Cambodia. We needed a way out from Vietnam as well," Ear says. To that end, when the family set foot in Vietnam, Ear's mother "immediately declared us Cambodians. Cambodians could in theory leave Vietnam."

With help from a cousin and a stranger's kindness, the Ear family arrived in France—the only Western country to maintain diplomatic relations with Vietnam—in 1978. His mother had a sister in San Francisco, but one of Ear's sisters was very sick, so they didn't make it to America for seven more years. "We refugees joke about this, but we always have our bags packed, just in case," he says.

When the Ear family finally made it to America, it was as tourists, not refugees. They settled in Oakland, where Ear's mom worked in sweatshops and the family lived on food stamps. "We got our green cards eventually," says Ear, who remembers "watching 'CHiPs' reruns, Judge Wapner, and 'Hart to Hart'" until his mother insisted her children be enrolled in school. By January 1986, he was at Willard Junior High School in Berkeley. He eventually received his Ph.D. from UC Berkeley.

After spending his childhood virtually on the run, Ear considers himself "among the most fortunate people I know—namely those who not only survived, but thrived." Because of that he sees his life "as one of public service. To those to whom much is given, much is expected," he says. "I speak truth to power on Cambodian politics and economy and beyond. I serve on a half-dozen boards, including the Nathan Cummings Foundation, Refugees International, the Southeast Asia Resource Action Center, Partners for Development, and more. I see my role as doing as much as I can to help the next generation, and that means teaching and researching."

When Ear enters the classroom, "I don't leave my identity at the door," he says. "I'm who I am because of where I've been and where I come from. I teach political economy, development, and security for that reason. These are all essential intersections of my life's work. I talk about the ideas that have shaped our world. Obviously, for me personally, some of these ideas have exacted a terrible price. But it's important to understand why. Anger doesn't solve anything. As a Buddhist, it also lets me practice the first law of karma: 'Cause others to have good results so you can too.'" 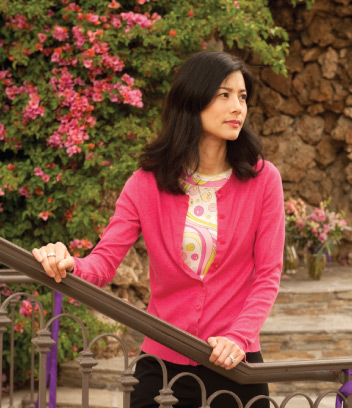 Associate professor of diplomacy and world affairs Lan Chu was just an infant when her family fled Vietnam on April 29, 1975, the day before the U.S. embassy in Saigon fell. The family (including six children ranging in age from 8 months to 10 years) had a harrowing escape via a barge that met up with a larger vessel out at sea. Chu's father was the last passenger allowed to board.

A U.S. frigate picked up the barge passengers and delivered them to a refugee camp in the Philippines. From there, the family traveled to Guam, where they received medical care. Chu's parents were told Lan "would not survive" and to "be prepared for an imminent death," in her father's words.

The doctors were wrong, and after seven weeks in Guam, the family boarded a military plane and landed in Camp Pendleton in San Diego. Chu's father had a contact in New York, a Vietnamese Catholic priest who he had done business with in Vietnam (Chu's family, devout Catholics, sold religious statues). He connected the family with German-Catholic immigrants who sponsored them in New York. The Chus arrived at JFK Airport on Aug. 12, 1975. They moved to Queens, and Chu's father began working for a frame company. "We had nothing when we got here," she says. Her mother told people they were Chinese because she was afraid of backlash over the Vietnam War.

The neighborhood Chu grew up in was a mecca for other immigrants and refugees. "My neighborhood sat between a largely black/Latino community on one side, and Italian/Irish Catholics on the other," she says. "Diversity was the norm." However, the location "only added to the ambiguity of being part of the 1.5 generation"—a term that refers to Vietnamese who were raised outside of Vietnam during and after the Vietnam War.

"We are neither here nor there," she explains. "I am Vietnamese, yet American. I'm American, but not Vietnamese. That's why I often just say I'm a New Yorker, because that best defines who I am. I was raised in a community of refugees and immigrants. Rarely did I have a friend that spoke only one language at home."

Chu's parents' refugee experience started her on a lifelong quest to answer questions about religion and politics. "Vietnam has a very high level of nationalism, so it was interesting to me that my dad chose Catholicism," Chu says. "For something that's so intangible, he put a lot of faith in that. He always believed 'God will take care of me.' Getting to each stop, from the Philippines to Guam to California to New York, he had that faith. That's what set me on the path to graduate studies." Her dissertation at George Washington University, in fact, was about how the Catholic Church resisted communism, and the Catholic Church's possibilities and limits as a social and political institution.

Today, Chu's research and teaching interests focus on the political role of religious institutions, the political liberalization processes of former and existing communist countries, faith diplomacy, and inter-religious dialogue. Currently, she is working on a book manuscript that examines the Vatican's influence on foreign policy.

"You could categorize me as American because I grew up here," says Chu, who joined the Oxy faculty in 2005. "But the refugee experience is passed down from your parents. Even if that's not what you visually see, everyone carries this experience with them, which reflects something inherently non-American as well."

Each time she has traveled "home" to Vietnam, she says, "I felt American because no one accepted that I was Vietnamese. But then oddly when I come back here, I tend to feel more Vietnamese. Sometimes I think in Vietnamese. That's when I'm reminded I have another identity … it just naturally occurs." 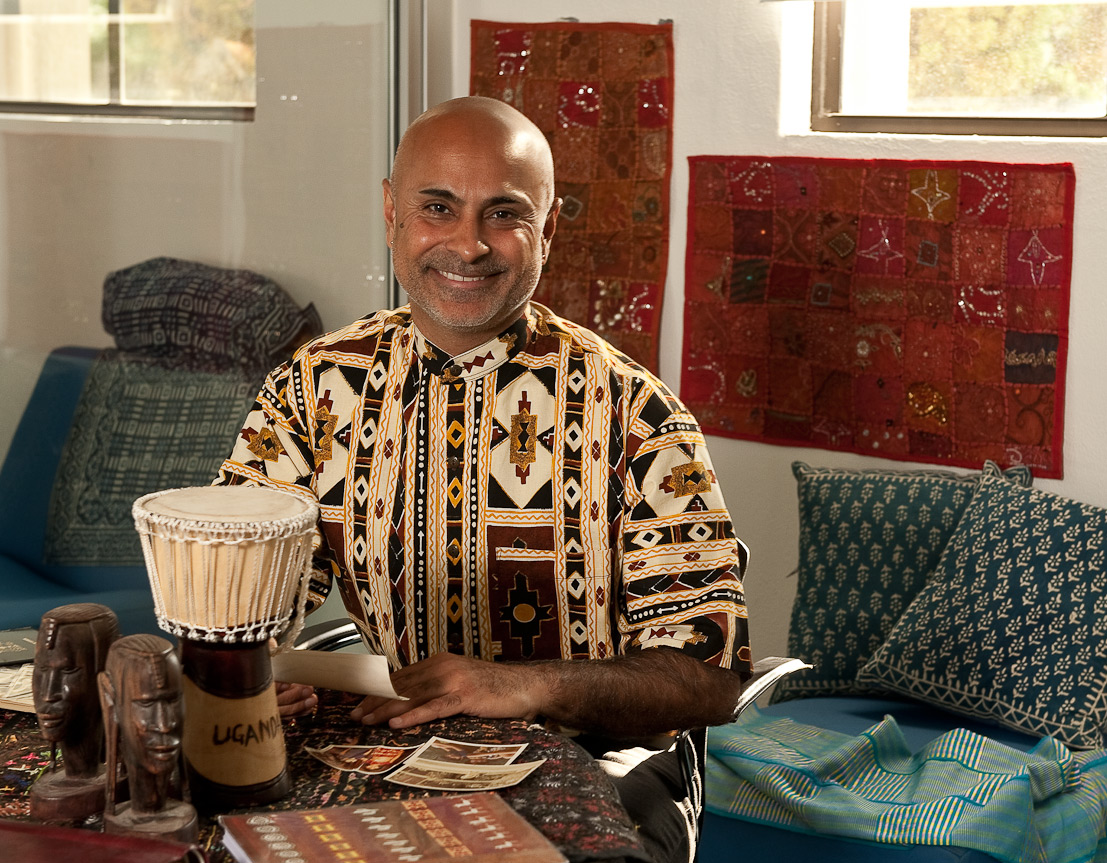 Sanjeev Khagram, the John Parke Young Chair in Global Political Economy, is recognized worldwide as an expert on globalization, transnationalism, sustainable development, and human security. But it was a long road from there to here. In 1972, Khagram and his family were expelled from their native Uganda along with 60,000 other residents of Asian descent (his family was originally from India—his great-grandparents emigrated to Africa to escape British colonialism).

The order by then-President Idi Amin stemmed from claims that Ugandan Asians—including Khagram's grocer parents—were responsible for the East African nation's economic struggles. Even though the family started from poor beginnings, they had slowly built a fortune and "we were the 10th wealthiest family in the country when we were expelled," Khagram says. Amin "froze all bank accounts and gave us 48 hours to leave the country." The family first traveled to Kenya, then were relocated to a refugee camp in Italy before finally emigrating to the United States.

"We had $50 and a couple of suitcases. In the camp, we were stateless, had no citizenship," Khagram says. The family was offered asylum by the United States, United Kingdom, and Canada. They decided to come to America, "sponsored by a wonderful family from the Unitarian church."

Khagram was 5 years old when the family landed in New Jersey. "When we first came to the U.S., when people asked me where I was from, I'd say I was from Africa," he recalls. "One thing my experience reminds me is how incredibly complex identity is."

In New Jersey, Khagram's mother, who had never worked outside the home, became a nurse's aide, and they started over again. "We lost everything," says Khagram, who joined the Oxy faculty in 2012 after teaching stints at Harvard and the University of Washington. "We weren't in an Indian community; we were always the different ethnic group. We lived in a poor working class neighborhood. … There's no way our lives could be what they were without the courage my family showed."

The experience afforded Khagram, whose Stanford education culminated in a doctorate in political economy, with a unique perspective: "It showed me how forces and conflict interact to shape people's lives, societies, economies, and environments, but also how much individuals and the work they do can have a huge impact in the world."

Another insight he gleaned was that entrepreneurs such as his parents can be a force for good. He tries to impart that "creative entrepreneurial approach to changing the world" to his students, both through the courses he teaches and as co-faculty adviser to Oxypreneurship, which provides students with the resources to pursue their startup ideas.

"I'd like to dramatically increase entrepreneurship among Oxy students—not in the narrow commercial sense, but to encourage students to be entrepreneurial leaders in all aspects of their life and career, whatever field they go into," Khagram says.

Ambition and drive were direct outcomes of his refugee experience, he adds. "You recognize that you, as a young person, have a chance for a life where you may be able to go to school, have a profession, that your parents won't. It's their sacrifice for your success." That leads to a sense of duty that refugees feel toward their parents, he says, as well as a desire "to do whatever we can to give back" because of the "unbelievable number of ordinary acts of kindness that made it possible to be here."

Khagram was hailed as a Young Global Leader of the World Economic Forum and wrote the UN Secretary General's Report on the Impacts of the Global Economic Crisis in 2009. A former dean of the Desmond Tutu Peace Centre and senior adviser on policy and strategy at the World Commission on Dams, he also served as architect/producer of the Global Initiative for Fiscal Transparency. Khagram has worked with global networks, multi-stakeholder initiatives, international agencies, governments, corporations, civil society and professional organizations, and universities all over the world. Despite his many professional successes, he says, he's never lost that sense of being on the move.

"When people ask me, 'Are you American?'—it's remarkable, despite how far you go, when people get to really know me, and ask where I'm from—I say I'm a refugee."