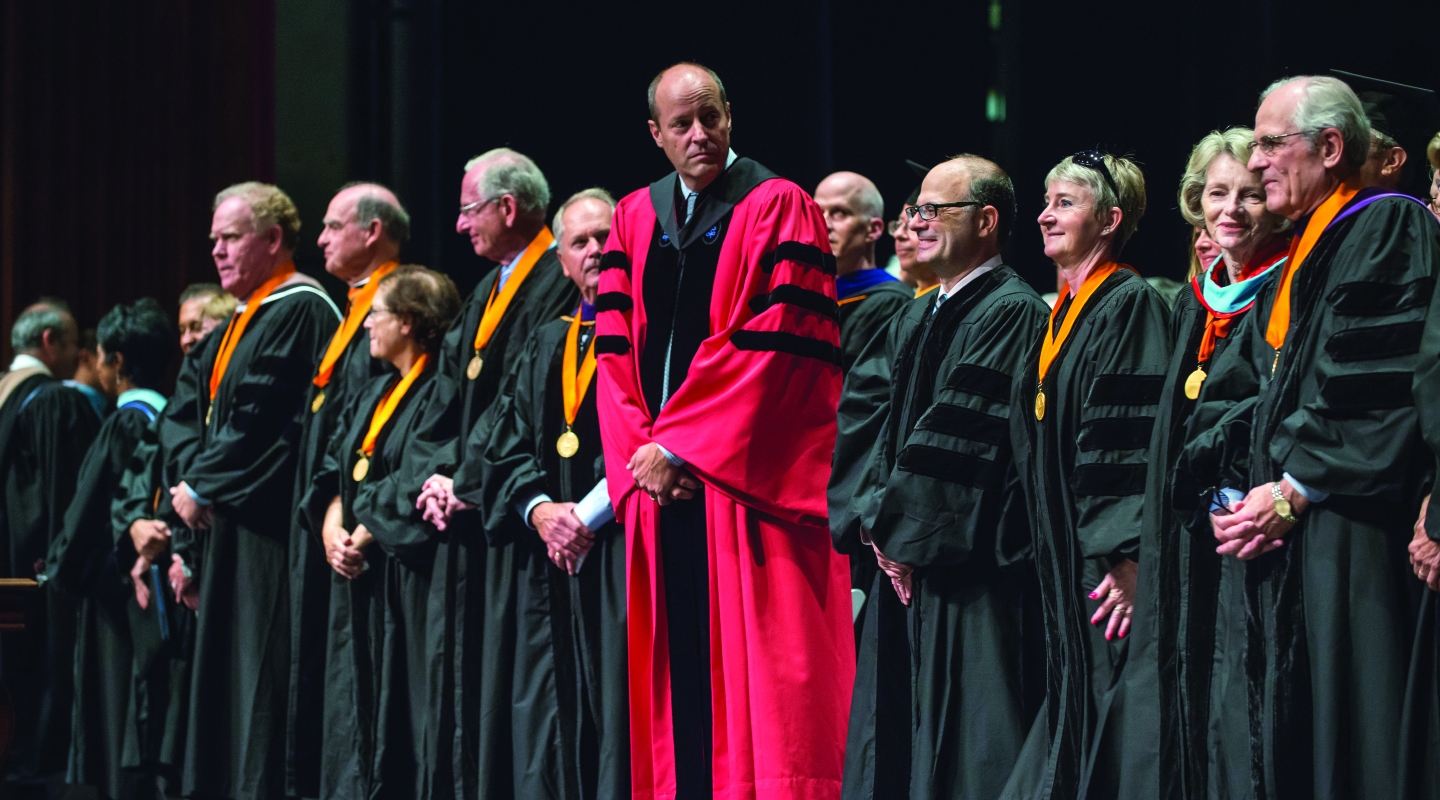 How has Occidental evolved during Jonathan Veitch's presidency? Let us count the ways

In “Magdalena’s Lamp”—his inaugural speech from 2009—Jonathan Veitch talked about taking on the “12 Labors of Hercules” and then proceeded to list them. It is a remarkably prescient road map for his presidency. Below are 11 milestones—one for every year of his tenure. (We leave it to readers to suggest the 12th.)

1. Commitment to the liberal arts. “I want our students to have an appreciation of complexity, a respect for the life of the mind, and a capacity for reflection,” Veitch says. “That’s the legacy I want to leave as president of Occidental.”

2. Urban/Los Angeles. Oxy has developed a distinctive profile in all things urban. Veitch enhanced the College’s civic engagement, brought in professors with expertise in a variety of urban issues, forged partnerships with major cultural institutions, and established the Institute for the Study of Los Angeles.

3. Global culture. The transformation of Johnson Hall into the McKinnon Center for Global Affairs, a permanent endowment for the Kahane United Nations program, and the tripling of international enrollment helped foster a more cosmopolitan campus culture. More than two-thirds of Oxy students pursue a variety of routes to global citizenship, from study abroad to international research, or internships and fellowships.

4. Environmental sciences. Oxy’s location at the nexus of the Pacific Ocean, Mojave Desert, and San Gabriel Mountains—coupled with the world-class Moore Bird Lab and Cosman Shell collections—offer unparalleled opportunities for study in the field and in the new Anderson Center for Environmental Sciences.

5. Enrollment. Applications to Oxy have risen 25 percent over the last decade, to a record 7,500 for the Class of 2023. The College has become more selective over the same period, with the Class of 2022 being the most competitive in 70 years.

6. Career development. The $2-million renovation of the Hameetman Career Center—coupled with an expanded staff and a robust paid summer internship program in Los Angeles—reinforce Veitch’s belief that “The best argument for the value of a liberal arts education is the success of our graduates.”

7. Obama Scholars. Endorsed by President Barack Obama ’83, the Obama Scholars Program—which will enroll its second cohort this fall—has become Oxy’s most prestigious scholarship. The program recruits applicants from all backgrounds who demonstrate a commitment to the public good.

8. Athletics. Investing in marquee programs such as track and field and building the Payton Jordan Athletic Offices, De Mandel Aquatics Center, and McKinnon Family Tennis Center, Veitch has been a champion of what Coach Brian Newhall ’83 aptly describes as the “sweatiest of the liberal arts.”

9. Faculty hiring. With a quarter of Oxy faculty on the cusp of retirement when he arrived, Veitch has shepherded the renewal of the College’s most important resource. More than 50 new professors have joined the ranks, enabling Occidental to reposition itself for the educational demands of the 21st century.

10. Fundraising. Veitch has bolstered Oxy’s fund-raising output to an average of $22 million a year over the first nine years of his presidency. The College’s endowment grew by 60 percent over the same period, standing at $434.2 million as of June 30, 2018.

11. Campus renewal. From the 1-megawatt solar array on Fiji Hill to the new Oxy Arts facility on York Boulevard, more than a dozen construction projects touched every aspect of campus. “President Remsen Bird once said that he never wanted to wake up in the morning without hearing the cacophony of a construction site,” Veitch muses. “I think we came pretty close.”