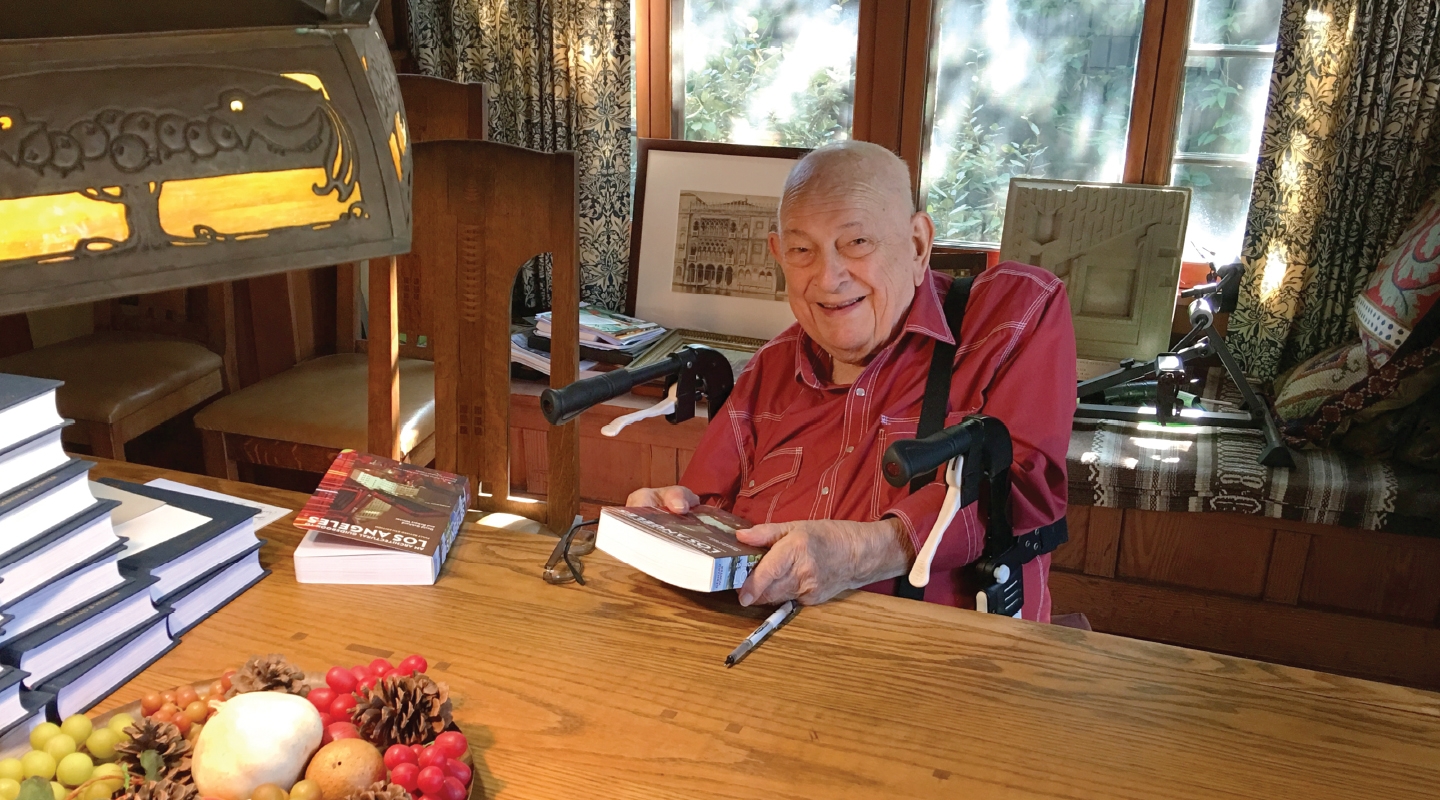 By all accounts, Bob Winter, the Arthur G. Coons Professor of the History of Ideas Emeritus, loved Occidental—its students, its faculty, and the College’s striking Myron Hunt-designed Beaux Arts academic buildings. “I go home to it,” he said in a 2018 interview. “I eat with friends at Colombo’s quite often and afterward we’ll go through campus, and I’ll point out all the buildings. I’ve had wonderful experiences with all of them.”

But the co-author (with the late David Gebhard) of An Architectural Guidebook to Los Angeles, first published in 1965, was characteristically peevish about structures that didn’t stir wonder in either its inhabitants or passersby. Occidental’s boxy Arthur G. Coons Administrative Center, completed in 1968, was one of Winter’s few quibbles with the campus he called home for 31 years.

“Bob was very happy when they grew trees in front of the building, so when you were coming in on Alumni Avenue, the trees were hiding much of Coons,” says longtime friend Norman Cohen, the Robert Glass Cleland Professor of American History Emeritus. Winter repeatedly joked that his bequest to the College would fund a “Myron Hunt façade” on the main administrative building.

Winter—who died February 9 at age 94, two months after a launch party on campus celebrating the publication of the sixth edition of his seminal Guidebook—“loved nothing better than to get the general public enthusiastic about architecture,” according to Ann Scheid, head of the Greene & Greene archives at the Huntington Library.

In a cityscape that has been made and remade, Winter sought to bring order to this “chaotic place,” Scheid adds. The Guidebook—regarded by many as the “bible” of architectural scholarship for the City of Angels— “teaches us to see the important things, the beautiful things, the things that are worth preserving.”

A native of Indianapolis, Winter served as a staff sergeant in the Army Air Corps during World War II. He completed his B.A. from Dartmouth in 1947, and his Ph.D. from Johns Hopkins University in 1957. As an instructor at Bowdoin from 1951 to 1953, Edward Kirkland—the college’s Frank Munsey Professor of History—“became a second father to me,” Winter said. When Kirkland was made a William Pitt Professor at Cambridge University in England, he asked Winter to teach his course for six weeks.

“Here was one of the most brilliant lecturers and discussion leaders in the country leaving his class to this character,” Winter recalled. Kirkland encouraged him to give a couple of lectures, which he later critiqued. “He said, ‘Bob, you know you’re trying to imitate me. Find your own style and stick to it.’ So I got my education on how to teach not in graduate school, but through experience.”

In 1963, after seven years at UCLA, Winter was recruited to Occidental by President Arthur G. Coons 1920. “I was fired by UCLA because I didn’t publish enough,” he said. In the decades to follow, he never stopped publishing, authoring about a dozen books on various architectural forms. (In retirement, he was also a regular contributor to American Bungalow Magazine, which he helped found back in 1990.)

Students, including Bob Inman ’72, an American studies major, remember Winter hosting classes, the most popular of which was L.A. Architecture, in his bungalow just blocks from campus.

“He used architecture to teach social history, as a window to trends and how people were expressing themselves,” recalls Inman, who helped Winter update the Guidebook for its sixth edition. “Bob connected to everyone at Occidental at that time because he was the director of the History of Civilization program. He was the emcee, if you will.”

For a History of Civilization lecture on Roman architecture, Winter took the stage in Thorne Hall dressed in a sheet fashioned like a toga. “I said that I’ve got to change into more comfortable clothing,” he recalled in 2017. “I took it off and, of course, I was dressed. No one will ever forget that one,” he added with his infectious laugh.

Economics major Bob Gutzman ’87 lived near Winter in Pasadena and played viola alongside him for many years in the Occidental-Caltech Symphony, until arthritis forced Winter to put his instrument down. He was among countless students who joined Winter on his bus tours of Southern California architectural gems. The sojourn, part of the L.A. Architecture course, was informally referred to as “L.A. on a Six-Pack.”

“Bob claimed to have not seen six-packs, but once did see two women at the back of the bus clinking champagne glasses together,” Gutzman says. “‘Scandalous!’ he would exclaim in his best theatrical voice.”

In 1971, Winter—lovingly known as “Bungalow Bob”—bought a 1909 Pasadena bungalow (for $46,500) that was designed by master tilemaker Ernest Batchelder. He appointed his abode with Arts and Crafts furniture, which at the time many considered junk. Winter picked up a Gustav Stickley table for $25, a piece that would sell for thousands today.

Winter formed a relationship with Ted Bosley, director of Pasadena’s Gamble House from 1992 to 2018. The 1908 structure, built by the Greene and Greene architectural firm, is considered an exquisite example of the Arts and Crafts aesthetic. At a massive 8,100 square feet, it’s “an overgrown version of the humble bungalow,” Bosley says.

“I think he marveled at its craftsmanship, mainly the beautiful materials and the exquisite finish that they were given by the builders,” Bosley says. As for his criticism, he adds that Winter “didn’t much care who he offended, so he would be very straight with his opinions about buildings. If they were ugly, he would say so, and people appreciated that.”

Winter, who never married, spent most of his holidays at the Venice home of Cohen and his wife, Lynn Dumenil, the Robert Glass Cleland Professor of American History Emerita. He even joined the couple on their honeymoon, an architectural tour of the Soviet Union. Dumenil and Cohen chuckle in recalling their friend’s sartorial standards, which paled next to his ability to single out beautiful buildings. “We would buy him sweaters and things like that,” Dumenil says. “Those looked pretty good.”

Cohen recalls the simpler moments with his friend, who joined the Oxy faculty three years earlier. In a photo that encapsulates Winter’s personality, he is holding a martini “in utter glee, with a smile that gave his face an impish, elfin kind of grin. That kind of thing made him happy.”

Winter’s legacy promises to endure. “He was certainly the guy to go to for Southern California architecture,” Bosley says. “He had a deeper and broader understanding of the architecture of the region than anybody I know.”

“Bob loved nothing better than to get the general public enthusiastic about architecture,” Scheid adds. “And that’s what his Guidebook did. People could take it in their car and explore the city. That was a gift to Los Angeles.”