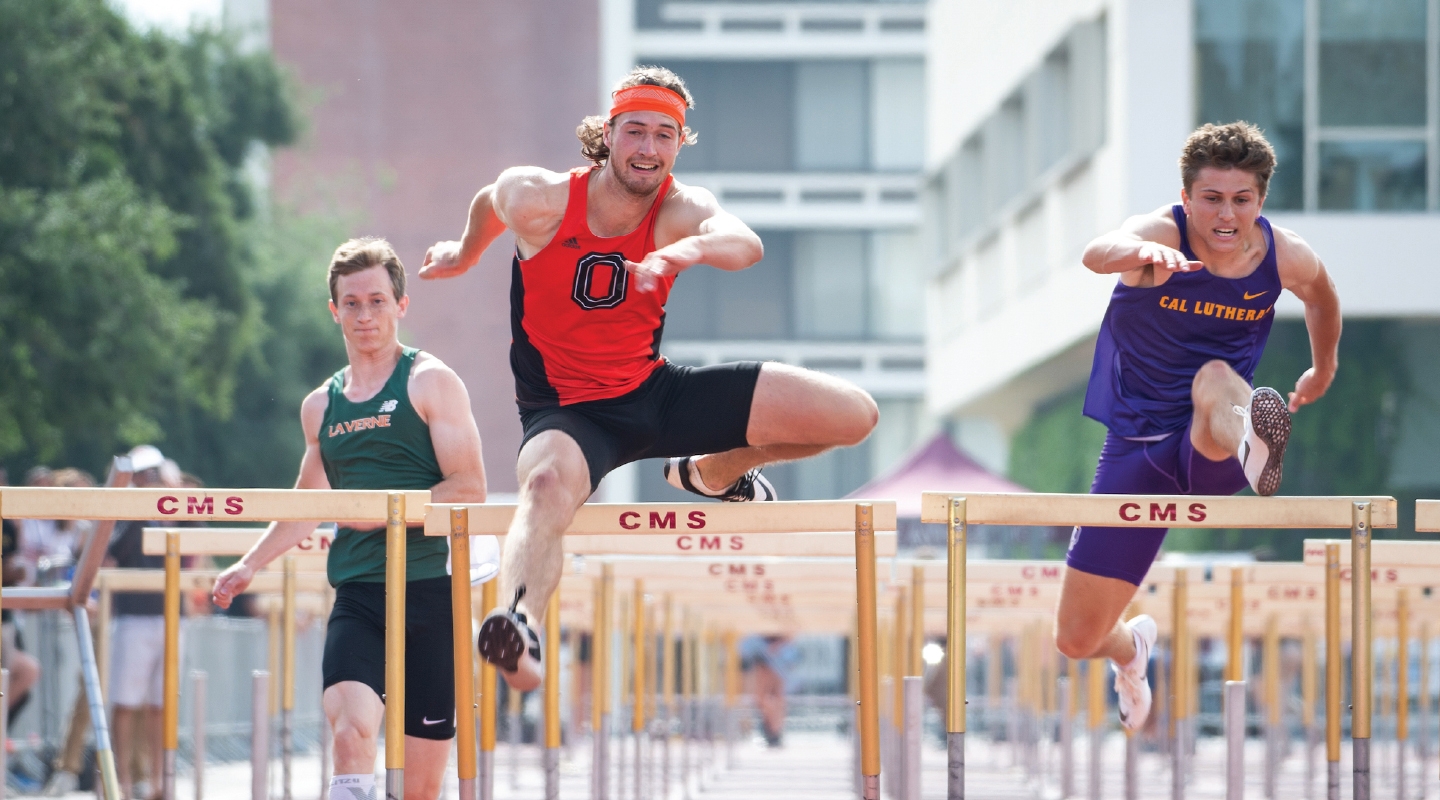 With standout performances on the track, mound, field, and course, Oxy’s student-athletes rose to the occasion across every spring sport

LaShauna Porter ’20 and Austin DeWitz ’19 stole the show on Day 2 of the SCIAC Championships, winning multiple events to lead the Oxy track and field teams at Claremont-Mudd-Scripps.

Despite being under the weather, Porter was the only woman under 25 seconds in the 200m at 24.75 and ran 12.03 in the 100m for a pair of SCIAC championships. The former 200m All-American also ran the third leg on Oxy's third-place 4x100m relay team. “She had a little adversity and still ran great races,” head coach Rob Bartlett said of Porter. “She’s the best sprinter in the conference.”

For the men, All-American high jumper DeWitz won his third consecutive SCIAC championship in the high jump, won the triple jump with a leap of 46-06.25, and won the 110m hurdles at 15.35 for a huge personal record and his third conference title of the day. “He always rises to the occasion and performs his best at the most important moments,” Bartlett said. “It’s just remarkable what a competitor he is.”

Sabrina Degnan ’19, who was the headliner on Day 1 with SCIAC championships in the hammer and javelin, added to her list of accomplishments with a second-place finish in the shot put with a best of 38-08.75 and a fifth-place finish in the discus with a personal record in a high-performing field. Classmate Allison Kilday placed third in the 400m hurdles with a time of 62.78.

In baseball, Tom Butler ’20 and Diego Ramirez ’22 continued a season-long trend of outstanding pitching for Oxy, but the Tigers couldn’t muster any runs in a 1-0 loss to Cal Lutheran in the SCIAC Postseason Tournament on May 11 at Chapman.

Butler struck out nine batters in seven innings of work, with just four hits and one walk. The Kingsmen’s only run came on back-to-back wild pitches in the bottom of the seventh. Ramirez pitched a perfect eighth.

Coming a day after a 2-1 opening loss at La Verne, the Tigers were eliminated from the playoffs and finished the season at 28-14 overall—a nine-game improvement over their 2018 finish and their second-best winning percentage in the last 40 years.

Nolan McCarthy ’20 gave up just two runs in a complete game effort against La Verne. The 6'5" righty was named SCIAC Pitcher of the Year, going 6-2 with six complete games, the best ERA (1.80) in the league, and the second most strikeouts (58).

Five women’s lacrosse players were named All-SCIAC following a 7-3 regular season and a tie for second place in conference play. First-year head coach Hannah Khin and her staff were named SCIAC Coaching Staff of the Year. The Tigers finished their season at 9-6 overall with a 17-12 loss to Pomona-Pitzer in the SCIAC semifinals.

Madisyn Hallare ’19 was named First Team All-SCIAC as a midfielder. She led the league in draw controls (50) and ranked in the top 10 in the SCIAC in goals, points, and ground balls. Midfielder Alessandra Pelliccia ’20, defender Corinne Bates ’21, and attackers Lauren Di Lella ’21 and Shai Goodman ’19 all made the Second Team.

Khin, who helped recruit and coach Oxy’s junior and senior players as the Tigers’ top assistant from 2015 to 2017, returned to the team as head coach after a single season at Southwestern University as an assistant.

On the links, senior men’s golfer and team captain Sam Miller and first year women’s golfer Brianna Kim were named Second Team All-SCIAC after a pair of terrific seasons. Miller finished fourth overall at the three-round SCIAC Championship to earn All-SCIAC honors for a third time. He led Oxy to a fourth-place finish in the highly competitive conference. Kim finished the three-round SCIAC Championship with the ninth-best total. The women’s team finished seventh in SCIAC play.

Softball players Bailey Stevens ’19 and Nyla Gatison ’20 were named Second Team All-SCIAC after standout seasons with the Tigers. Catcher Stevens hit .341 in conference play for the year and now holds Oxy’s career home run record at 23. Outfielder Gatison hit .326 in conference play and earned her second All-SCIAC honor after being named First Team in 2017. Overall, the Tigers struggled to a 5-34 record.

The men’s and women’s swimming and diving teams had two relays and two individuals honored as All-SCIAC for finishing in the top three at the SCIAC Championships in February. Cindy Dong ’22, above, led the way for the Oxy women as the SCIAC champion in the 200 fly. She broke the school, SCIAC, and conference meet record at 2:02.13 and later placed 10th overall in the event at the NCAA Division III Swimming and Diving Championships. Katie Hines ’22 earned the other individual award, finishing second in the 1,650 freestyle.